March 6, 2005:  I made another trip to ACE Hardware to get the screws and nylok nuts to mount the compass on the "dash panel" inside the windshield.  I also drilled a 1/4" hole beneath the compass base, inserted a rubber grommet, and threaded the compass light wires through the top skin behind the instrument panel for connection to the light dimmer circuit. The windshield was put in place for the final time.  All the windshield screws are in the roll bar, and the seven clips that hold the bottom edges to the F7106 skin are secured with pop rivets. 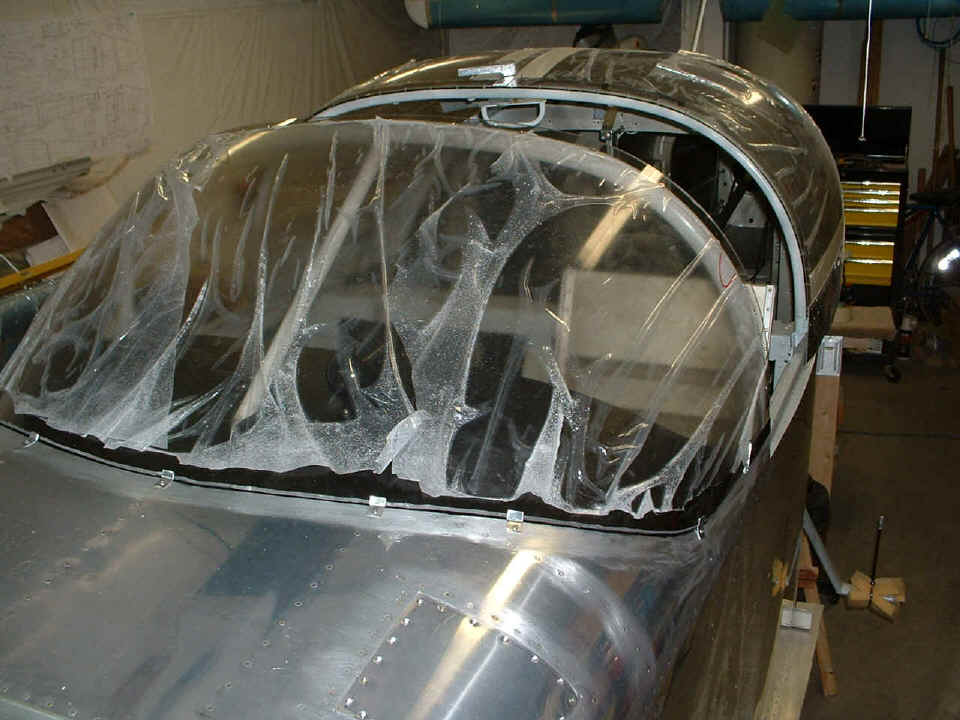 When I was talking with a technical adviser at Van's a few days ago, he mentioned a slot cut in the F7106 to let the plexiglass come inside the rear aprons of the F7106 adjacent to the roll bar.  Nowhere in the prints does it show this, but it is mentioned in the text, but not shown in the black and white photos in the manual.   Here is what I presumed they have done with the F7106 and the windshield in that area.  I used my small unibit to put in a hole, then tin snips and a deburring tool along the edges of the slots on both sides of the forward top skin.  I have to scrape off the black paint on the outside section of the F7106 before doing the fiberglass layups. 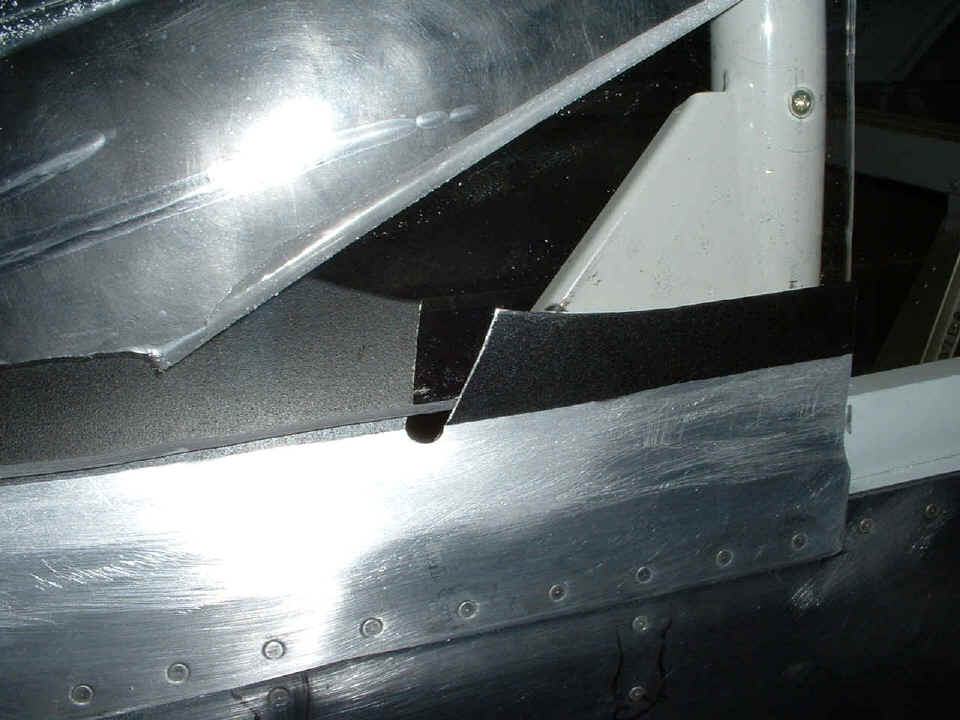 The last picture of the day comes from the evening session after I came back with fresh vinyl electrical tape to protect the "visible" portion of the plexiglass when I am sanding the portion of the windshield that will be buried under layers of fiberglass and epoxy resin and bonded to the F7106 forward top skin.  I went all around the boundaries of the windshield measuring the edge location of the layers of tape that will define the edge of the fiberglass layers when that is completed.   Last job of the day was to use my 1-inch wide X-acto sanding block to rough-up the edges of the windshield that will be bonded to the fiberglass and epoxy layers.  The bottom layer of tape is 2-inch wide masking tape for easy removal when the fiberglass work is completed.  The black vinyl electrical tape is on the top to resist the sanding of the plexi now, and the epoxy and glass layers in prep work for painting the fiberglass for ultraviolet ray protection of the fiber glass. 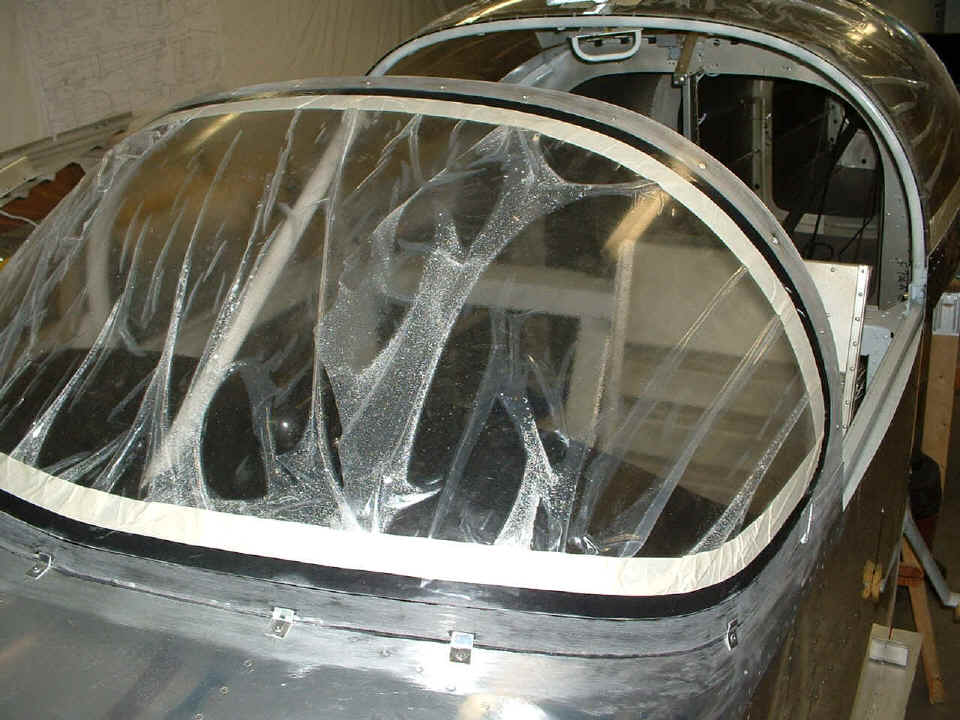 The windshield is now ready for fiberglass laminations to be added in the next work session.  And one more item of note today:  The construction time now totals 1702.7 hours.

March 7, 2005: Today was about finishing up two metal parts needed on the spinner and some other preparations for the fiberglass session.  More about that later.  This is the first filler plate that goes behind the Hartzell variable pitch propeller blade.  I neglected to mention the visit I had late on Sunday afternoon from Maurice Garner, a local pilot and RV-wanna be builder.  Maurice wanted to catch up on the status of my airplane and stopped by before heading to the airport to get in an early evening flight.  I used Maurice to my advantage and had him help me twist the propeller blades to full pitch for verification of blade clearance with the fiberglass spinner cone and spinner backplate. 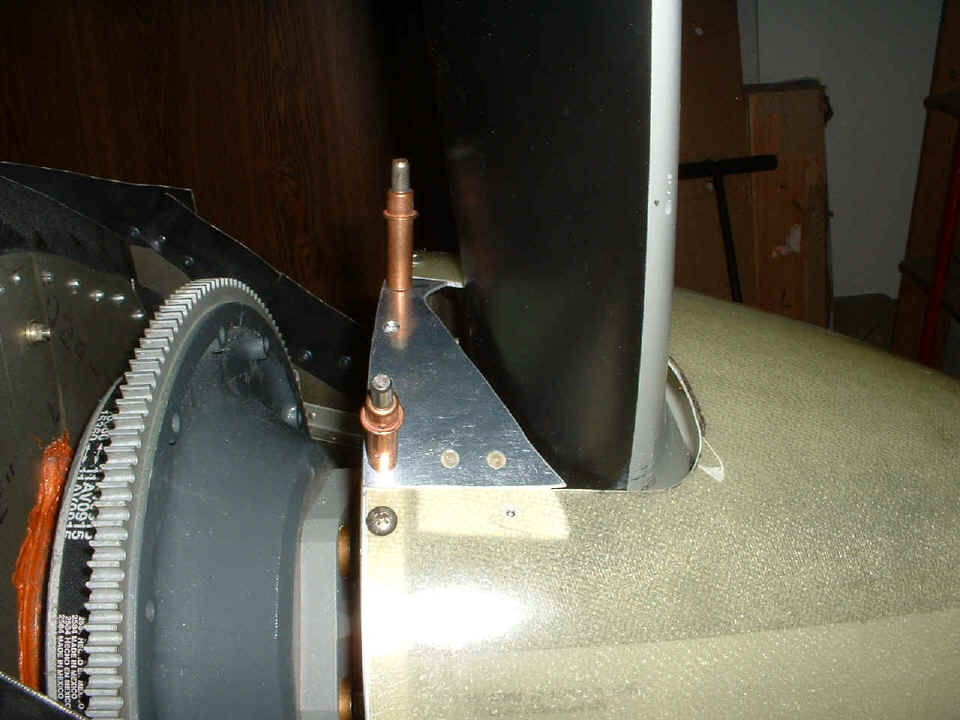 Here is how the first one looks with the doubler and platenut that is used to brace the long open cutout side of the spinner cone.  I had to bend both plates gently in my bench vise to match the curved shape of the spinner back plate. 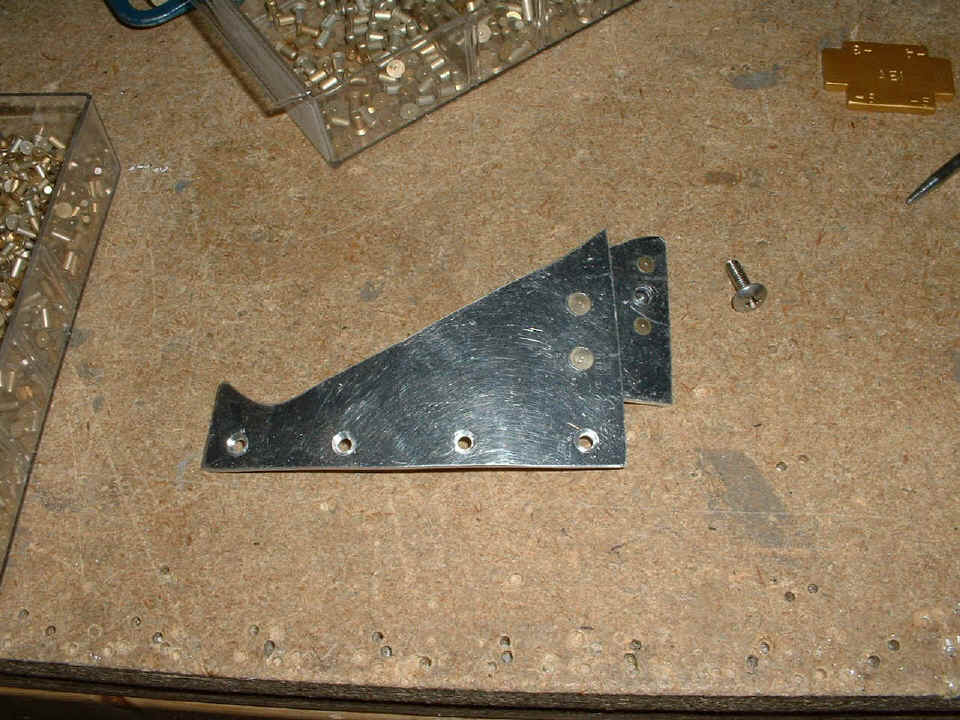 After building the first one, the job was to do it all again for the other propeller blade.  This piece of 0.063" aluminum plate is cut from scrap from the original instrument panel supplied by Van's.  You can see the outline I drew with my black Sharpie pen for the next filler plate.  The ragged bandsaw cut is plainly visible from fabricating the first filler plate. 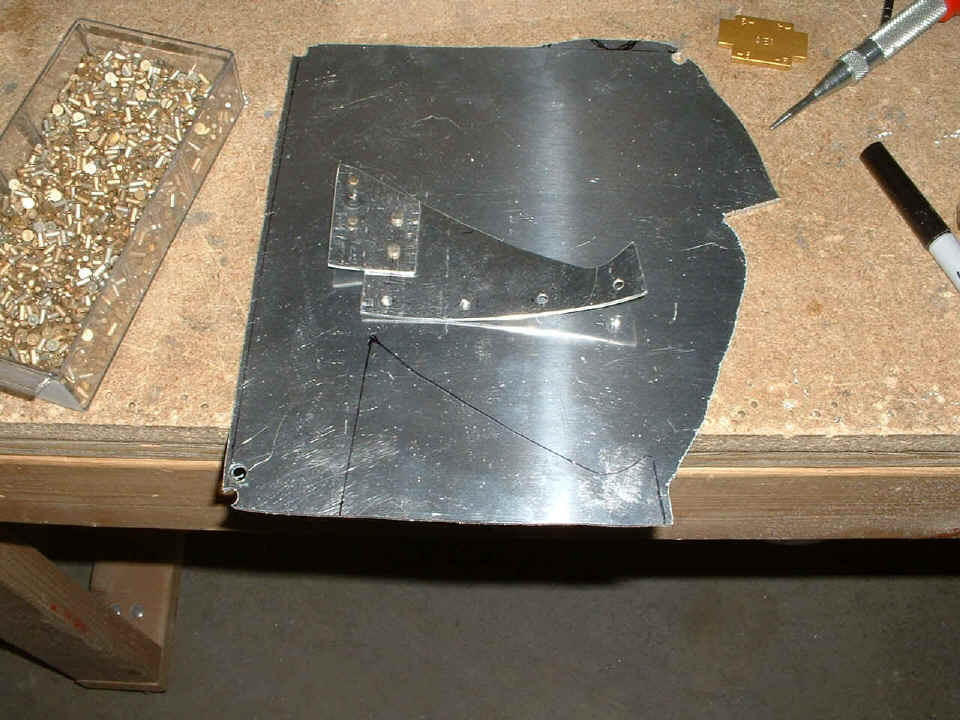 Here is the new filler plate assembly beside the first one.  Each one is marked to fit behind only one of the two propeller blades since the mounting holes to the backplate are match-drilled.  Both of them will be riveted to the spinner backplate eventually.  I will twist the prop one more time while these plates are clecoed in place to double-check the blade clearance before riveting them in place. 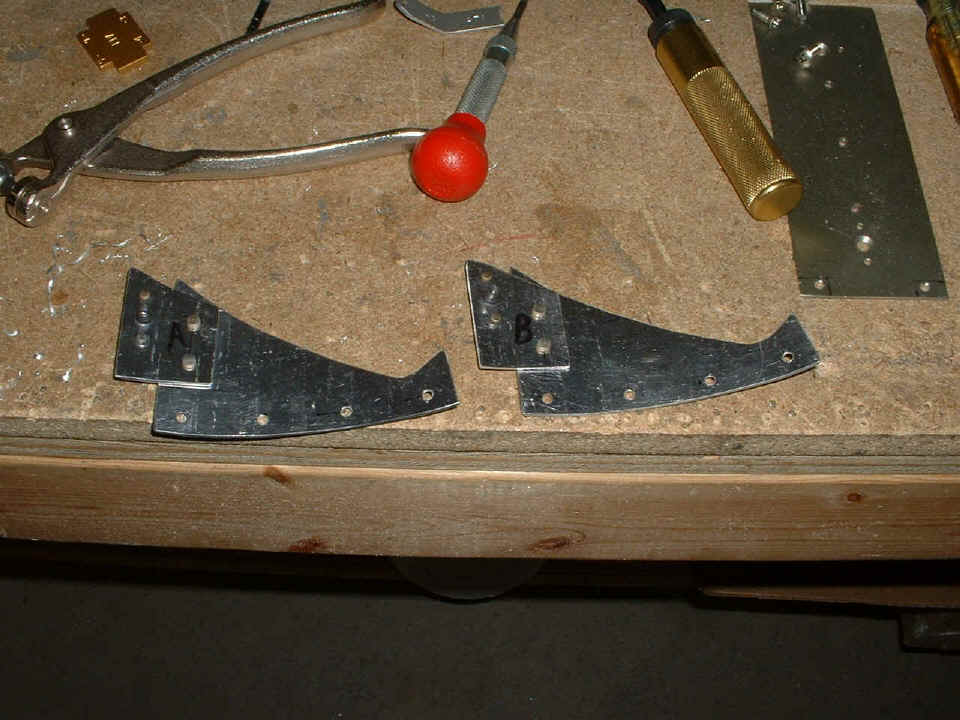 I was thinking of winding down for the day, when I called Ken Scott at Van's technical help line for one more bit of advice.  When I described to him the tape layering I had done further up this page, he advised me that the masking tape could "wick the epoxy resin" up under the tape onto the visible area of the windshield.  He described the vinyl electrical tape you see in the photo below, which I found at Home Depot, just as he said.  There are now three layers of this tape directly on the plexiglass and the other two layers are in the trash.  I also started building a sanding block with the correct shape to work on the glass layers that will go in front of the windshield. 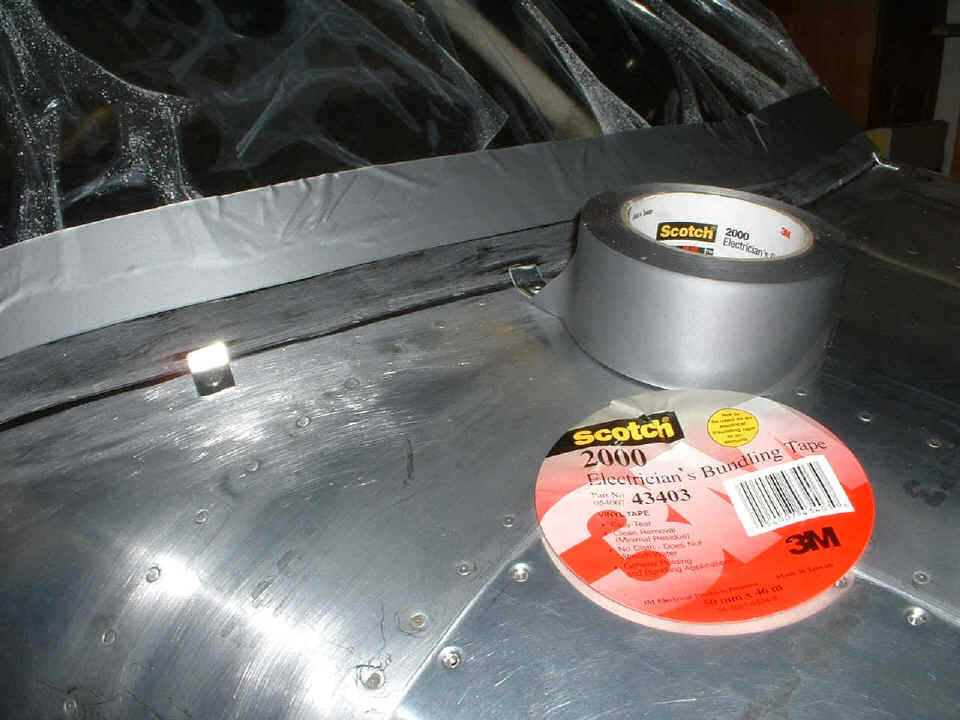 Today had two work sessions.  I put in 3.2 hours working on the propeller parts and some other cleanup work, then after the call to Van's late this afternoon, I put in another 1.5 hours this evening putting on the new tape around the windshield and repairing two pop-rivets on the canopy.  Those two rivets were not properly seated and were up out of the countersinked holes in the plexiglass canopy.  I found them when I put on the very slick packaging tape Ken recommended for easy release from the fiberglass overlap layers along the back of the windshield and the roll bar.  I also picked up a full cartridge of white RTV Silicone to caulk the area on the aft side of the roll bar where the spacer washers are under the aft edge of the windshield.