April 4, 2005:  Back on track this afternoon after a couple of hours of commercial web page work in the morning.  I started a beautiful day with 76-degree temperatures by peeling off the Scotch tape on the upper cowl where I had patched the abandoned rivet holes.  Then I got serious and started work on the wing tips again.  With the experience of the LEFT wing tip behind me, the RIGHT side went more smoothly.  I taped the wing tip rib into its approximate position, then fitted the wing tip assembly to the wing to make the final placement of the rib inside the fiberglass wing tip. 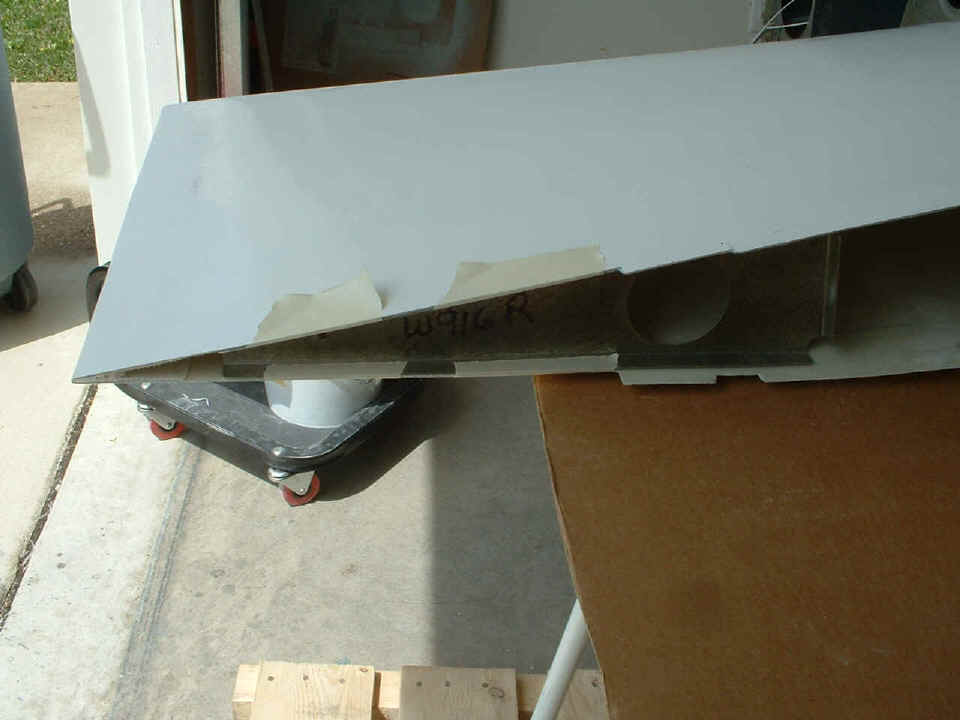 Next came the alignment of the wing tip with the aileron which is already aligned with the wing chord line.  I drilled and clecoed both ends of the rib on the bottom side of the wing tip only.  This time, only one hole was "re-drilled" in the fiberglass wing tip before achieving the correct alignment. 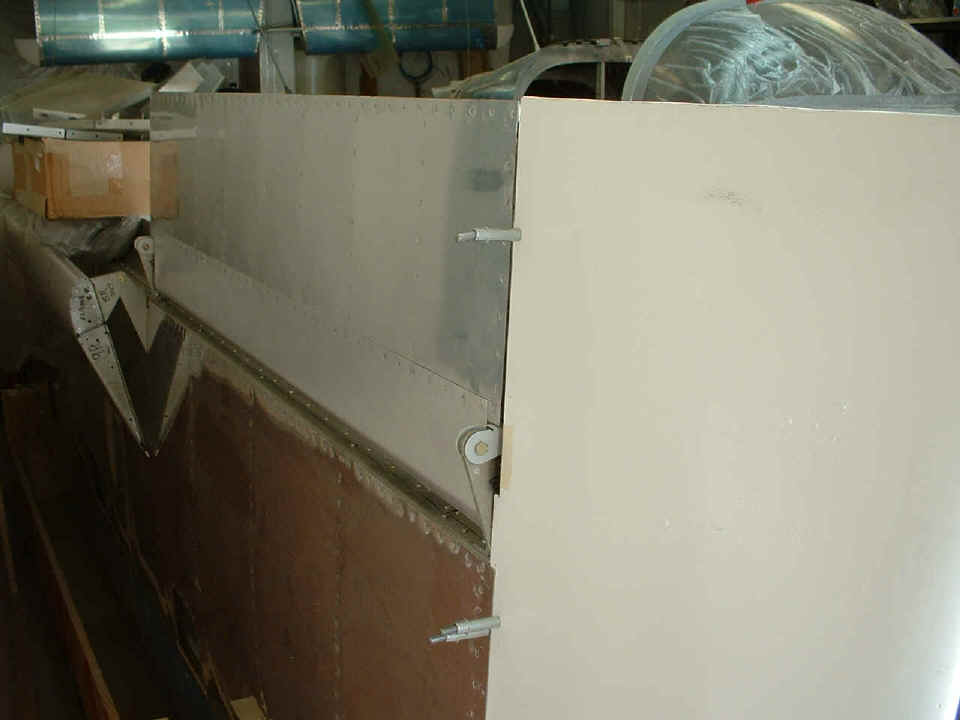 The top side got ONE cleco only after I was satisfied with the alignment.   All the other holes in the rib will be drilled on the work bench. 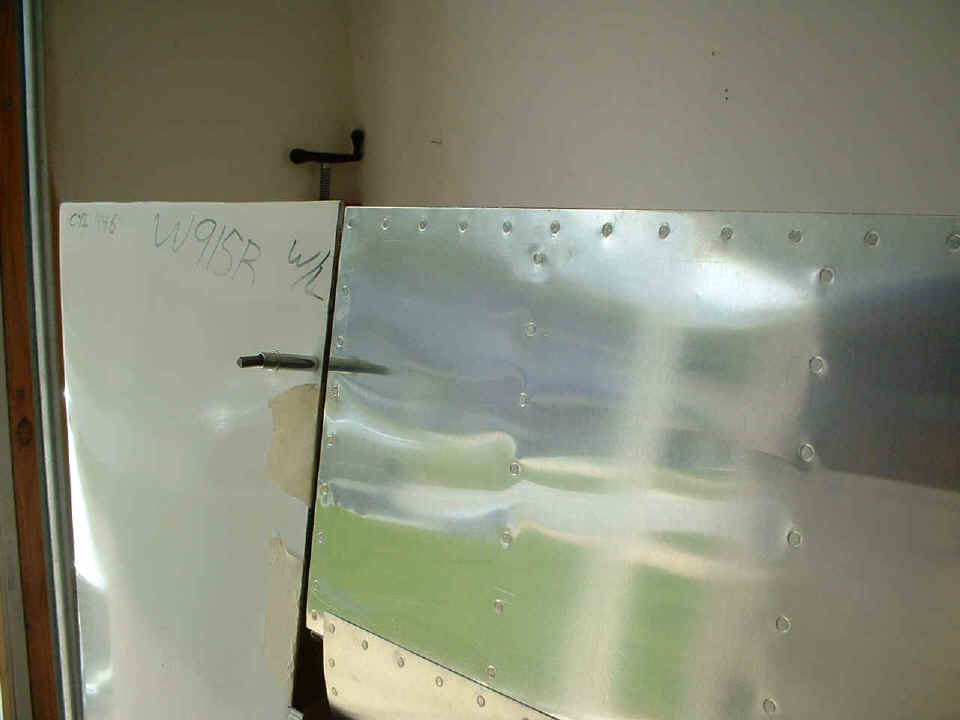 Here is a later view after I had finished drilling ALL the holes in both ribs inside the wing tip on the work table. All the holes through the wing skins were drilled when first fitting the wing tip to the wing itself.  The #4 wing tip mounting screws will be placed in these holes. 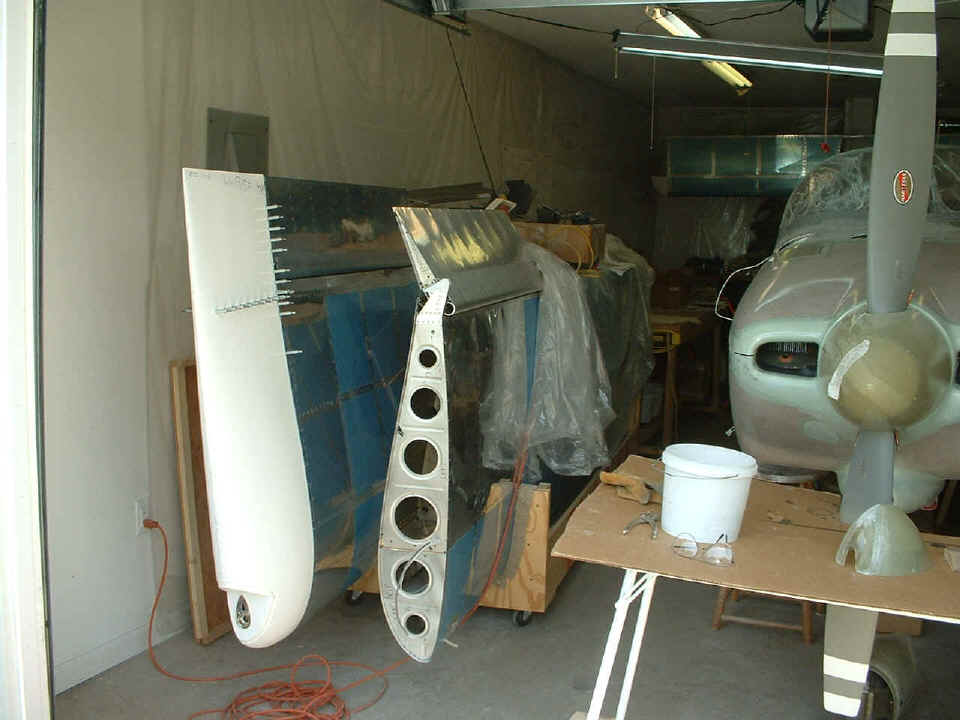 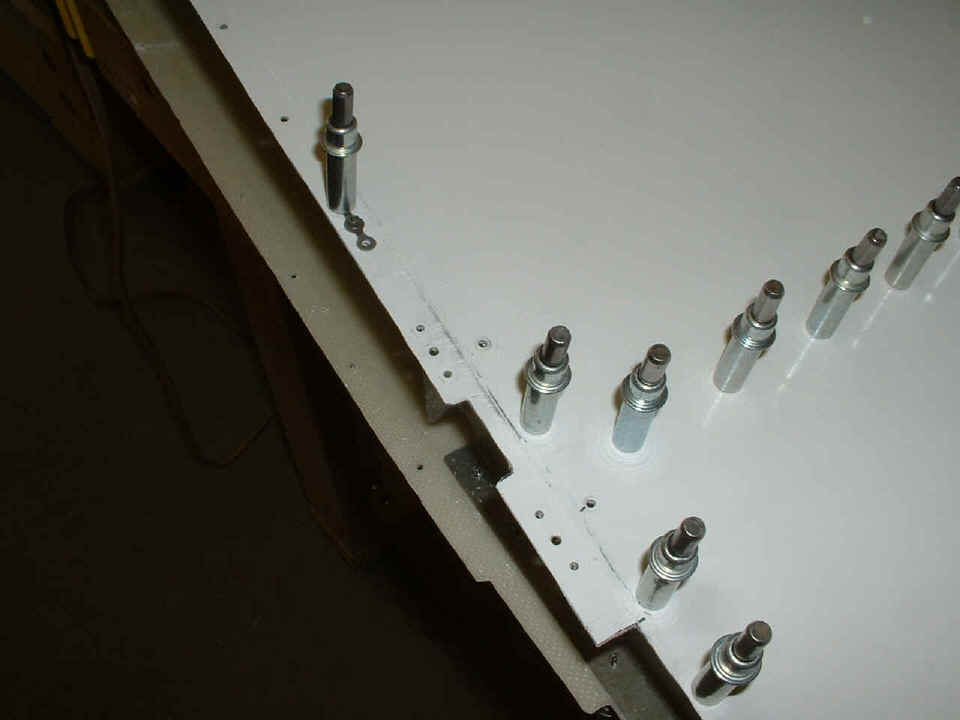 And eventually, all the holes are drilled and countersinked, then the platenuts are riveted in position.  This is how I left the RIGHT wing tip after two sessions that totaled 5.2 hours.  The place that I patched is thicker than the rest of the wing skin and it is adjacent to the J-stringer location on the top inside of the wing.  That is why there is a small area with about 1/16" trimmed away adjacent to the patched area.  I put in all the platenuts with my rivet squeezer in the areas of uniform thickness.  I stopped work just before 8 PM and will put in the platenuts in the thicker area in the next work session.  I will also rivet the two ribs in place in that session.  After that, the Whelen strobe/marker light assembly will be finished and the clear lens secured over it. 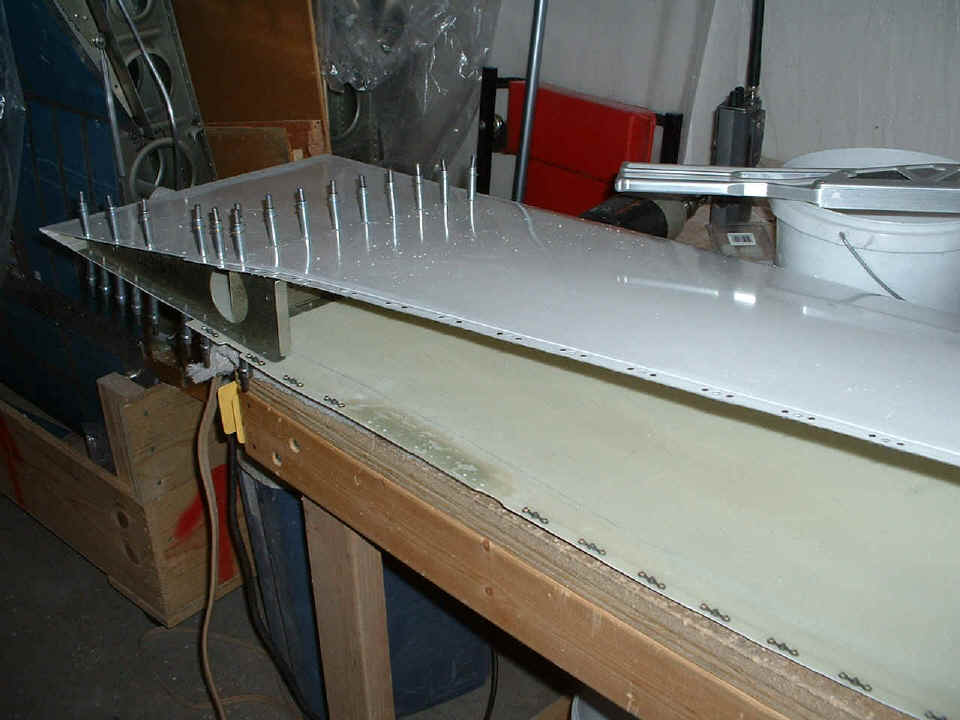 The project log book spread sheet now has 1792.4 hours of assembly time and 69 hours of prep and clean up time.

April 7, 2005:  I need to apologize to my regular viewers for not posting in the past few days.  I have been busy with family business, not my airplane project.  I have one more day this week of travel to the Atlanta area and will not get a good work session on the airplane until the weekend comes.

April 9, 2005:  I now have matching wing tips, and I don't mean shoes.  It only took about one hour to finish up with the #4 platenuts, then rivet in the two ribs in the RIGHT wing tip.   In that time, I also got the strobe and marker lights installed in the Whelen light fixture and put the clear lens over the marker/strobe light area.  Now I have a matched pair of wing tips in the living room ready to go to the airport. 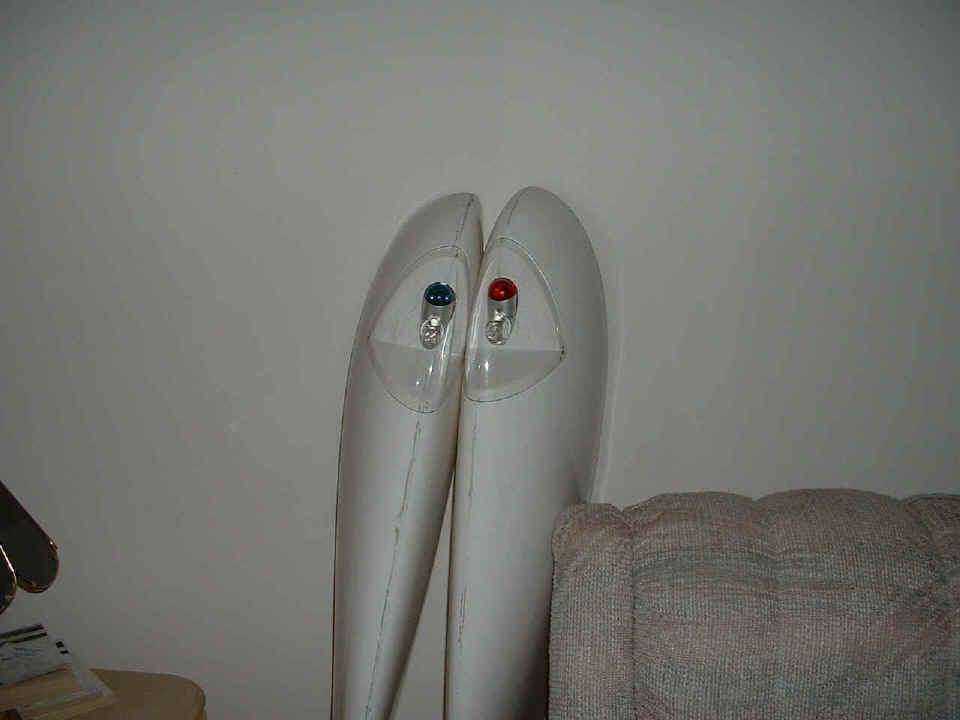 I began wiring again with the installation of an audio line to the Garmin GMA-340 panel, J1 - pins 31 and 32 for an altitude warning alert from the likes of a GPS 296, etc.  (Just planning ahead for the future.)  I added about a foot of red Tefzel wire to the Dynon power wire that was previously just a bit too short.  This gets me ready to put in the right sub-panel tomorrow, then proceed with wiring the lights that connect to the dimmer circuit.  As before, the wiring does not make for much of a picture to see, so there isn't one of that wiring tonight.  When the panel is back in place tomorrow, we get another picture to complete this page.  The log book gets 2.7 hours added tonight, including some scraping of excess epoxy from the fuselage and the windshield roll bar.  The total time is now at 1795.1 hours.

I got a couple of emails from Frank Karasti of Gilbert, Minnesota.  Frank is currently working on the fuselage of his RV-9A and has been following my progress on this web site.  I have a cousin who lives up in that area, just across the state line in Brule, Wisconsin.  I had promised her that I would come up that way with the airplane when it is flying.  Since I will be that close, I must stop by to visit Frank on the Minnesota side of Lake Superior, about 76 miles away by RV-9A.  Of course, that would be as part of a trip to Oshkosh for sure.