July 4, 2008:  The best way to celebrate this day was to get my airplane back in service and go flying.  I did the final check of the ELT at the top of the hour per the regulations and it was good of course.  I filled in the aircraft log book for the completion of the conditional inspection, compliance with Van's Service Bulletin 7-11-09, and the oil change and new oil filter of course.  Then it was time to go flying.  The air was bumpy today at low levels and that meant the best place to fly was above the clouds.  Wendell and I had to climb up above 10,500 MSL to find smooth air. 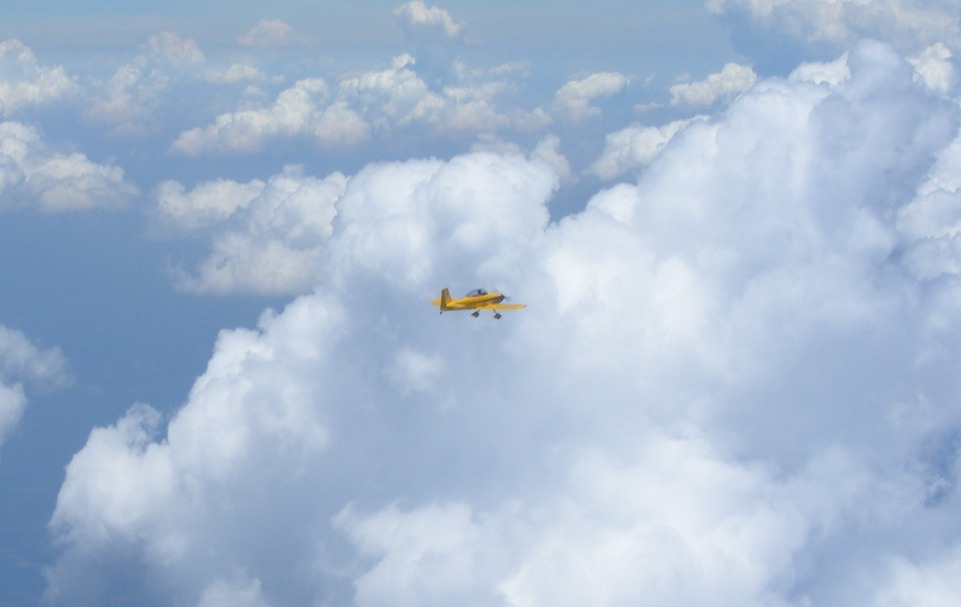 I managed to get a bit closer and the pictures got better.  We settled in at 11,500 MSL and headed East toward Dalton, GA (KDNN) and took a few pictures along the way while cruising at 145 MPH true airspeed.  I pushed the zoom lens out to get this shot framed. 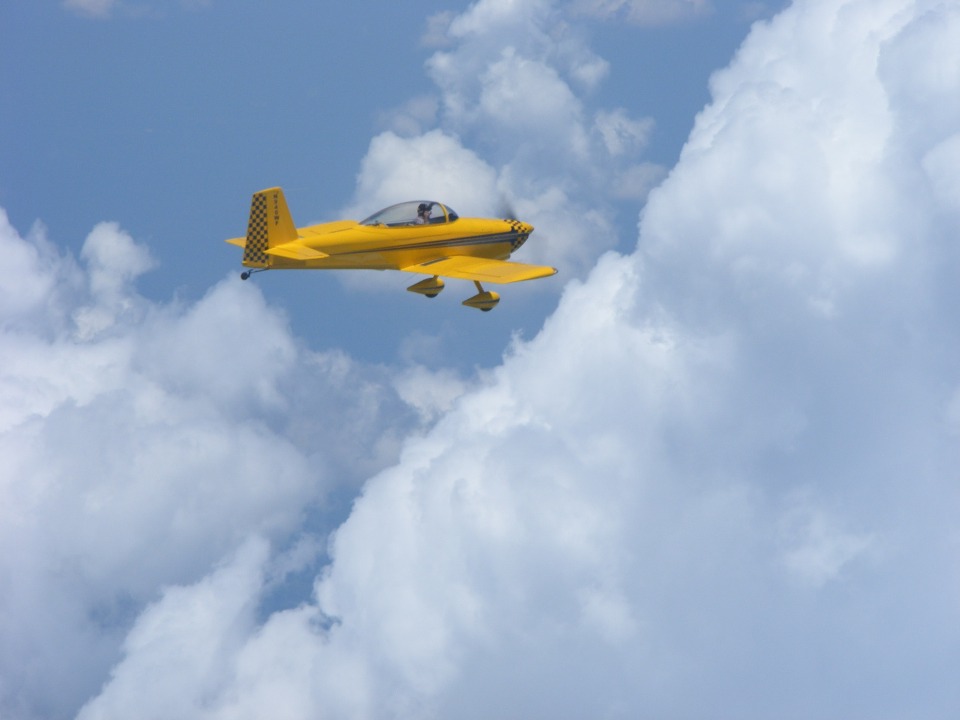 This was the best photo Wendell snapped of my airplane.  I had to process it in Corel Photo Paint-10 to get the brightness this high.  It was underexposed, to say the least. 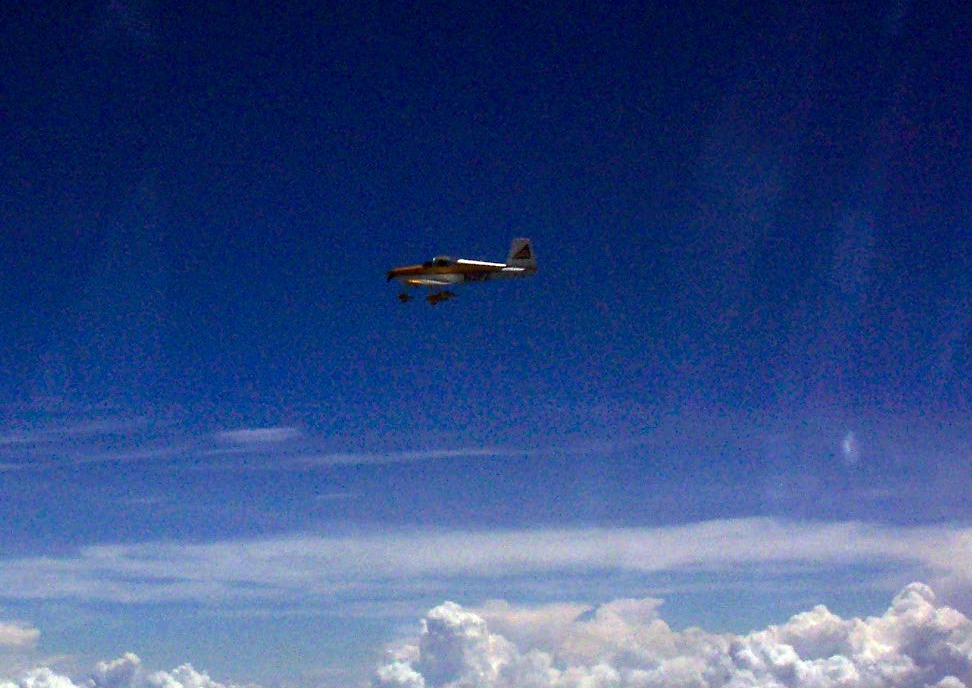 After we both landed, I completed the photos of his canopy locking mechanism shown on his PAGE 86.  And of course, here is the map of where we flew today.  I took off first and saw Wendell doing his engine runup when I came around the north end of the field and turned south.  The climb to smooth air above 10,500 MSL was out to the West of Lafayette.  When I reached 11,500 MSL, I circled over Lafayette airport looking for Wendell as he came up to my altitude.  At that point we headed on an Easterly heading to stay away from the Chattanooga Class C airspace.  The photos above were all taken before we reached the Dalton area.   At that point, we moved away from each other, throttled back, and descended back toward home base.  My Hobbs meter added 1.0 hours to reach 243.5 hours total time on "Enterprise".

July 11, 2008:  Here is a rare update on Friday evening.  I checked on a pair of service bulletins put out for Slick magnetos.  When I downloaded and printed both SB's, I found that my ONE magneto is not in the serial number range of affected mags.  Finally, I catch a break.  Now if I could just have full fuel tanks and a need to go somewhere in the airplane!

Here are the links to the service bulletins:

The RV aircraft Gods have smiled upon me this time!

July 20, 2008:  The past few days have been hot and hazy.  I went out yesterday to do my usual Saturday errands.  Wendell took off with a friend in the Cessna 172 the friend sold to another pilot near Omaha, Nebraska.  The departure was around 7 AM with one fuel stop in Illinois East of St. Louis, Missouri.  He called me about 10 minutes after they landed at the destination airport.  They will be returning via the airlines from Omaha.

As for me, I did not go flying at all since the haze reduced the visibility.   The high-temperature and humidity would have made the low-level flying operations miserable indeed.  I restocked my groceries and spent the remainder of the day indoors.  I did visit with an old high school friend this past week.  He wants me to take his nine-year-old grandson for a ride.  I told him about the EAA Young Eagles program and some of them that have flown with me in the past.  We have not scheduled a date for the flight.

July 26, 2008: I had a day of flying in low ceilings, dodging rain showers, and generally having a good day along with some good country barbecue at a small restaurant on US 1 just west of Lexington, South Carolina.  It is getting late, I have to get up early for a commercial flight to Philadelphia, so you have to be patient until late Sunday afternoon for the update of the text and photos.  Here is the map showing the route of flight for today.

If you are heading to Oshkosh, Wisconsin, have you watched my arrival videos from Airventure 2006?  If this is your first trip to OSH, you may want to observe the arrival procedure by watching the videos linked from my PAGE 228.

July 27, 2008:  I discovered free wireless internet at the Charlotte, NC Airport.  I have about an hour before my next flight, and thought I would make good use of the time.  Here are the photos and story of yesterday's flight from Chattanooga, to Lawrenceville, Georgia and beyond to Lexington County airport about 10 miles SW of the Columbia, SC Airport.  This first photo of the day was taken on the ramp at Lawrenceville (KLZU) where I stopped to pick up my old friend Marty Mason for the ride over to South Carolina to meet his brother for lunch and a visit to his home.  I later learned how much his brother enjoys living in a forest, close to nature and the animals. 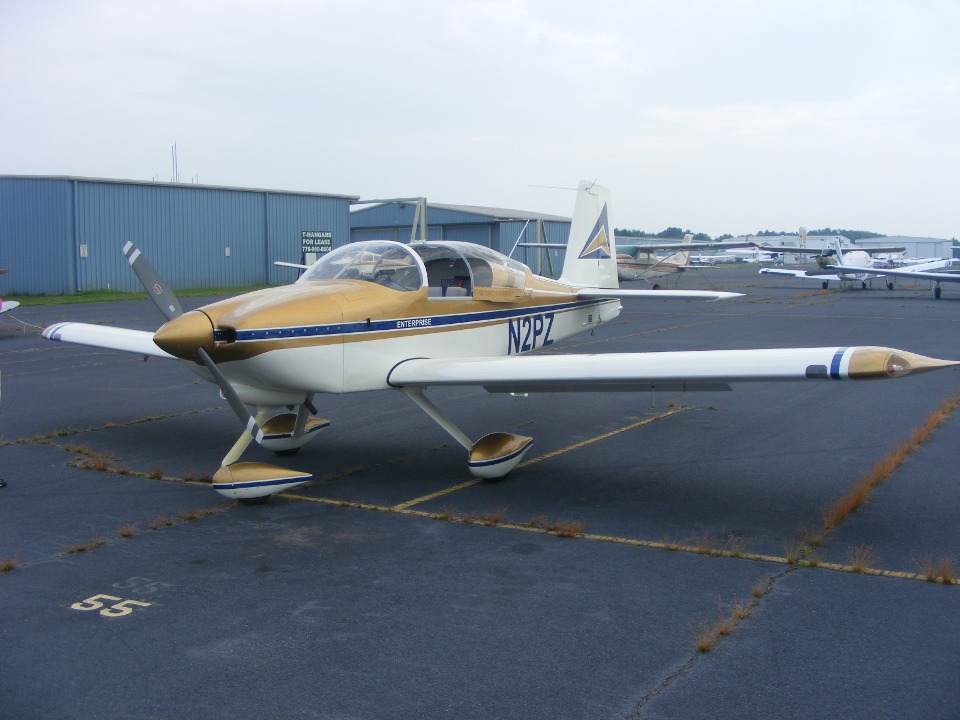 The trip from Lawrenceville to Lexington County Airport (6J0) took just over an hour cruising below the cloud deck at 2,500 to 3,500 MSL.  When we arrived there, one local pilot was in his hangar having just returned from a morning flight in his Pietenpol, parked at the fuel pumps in the background.  Marty placed my RED CUP on the wing walk to be sure it got into the photo.  That is his hand on the wing tip. 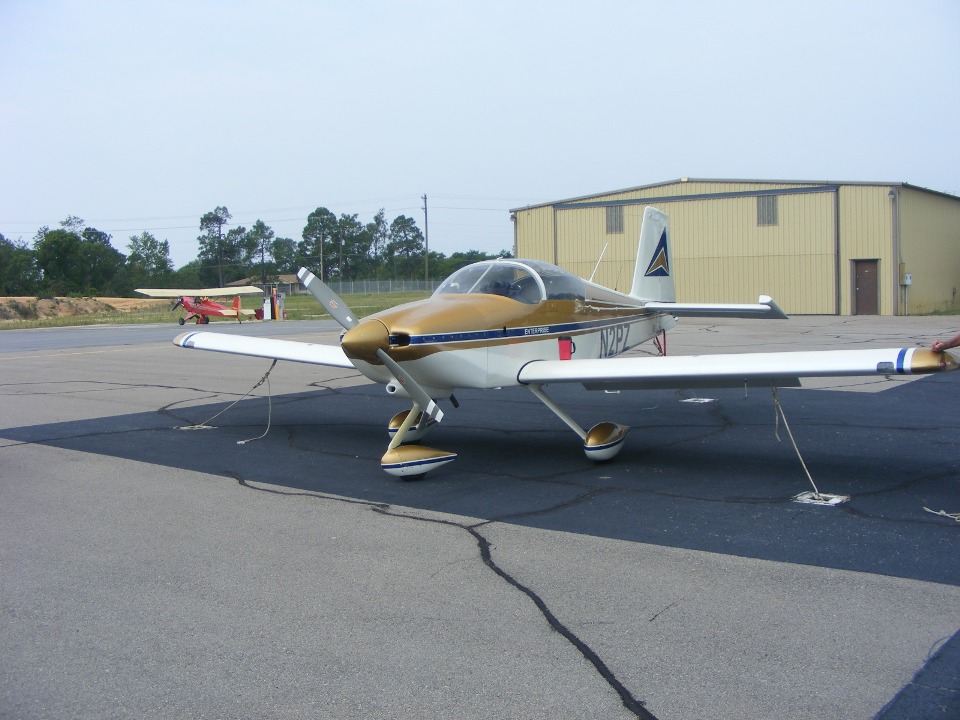 This is where we went for lunch.  As I mentioned above, the little Bar-B-Q restaurant is located on US 1 just west of the town of Lexington, SC.  They are only open on Thursday, Friday, and Saturday, and specialize in take out.  They only had two small tables inside for dining in. 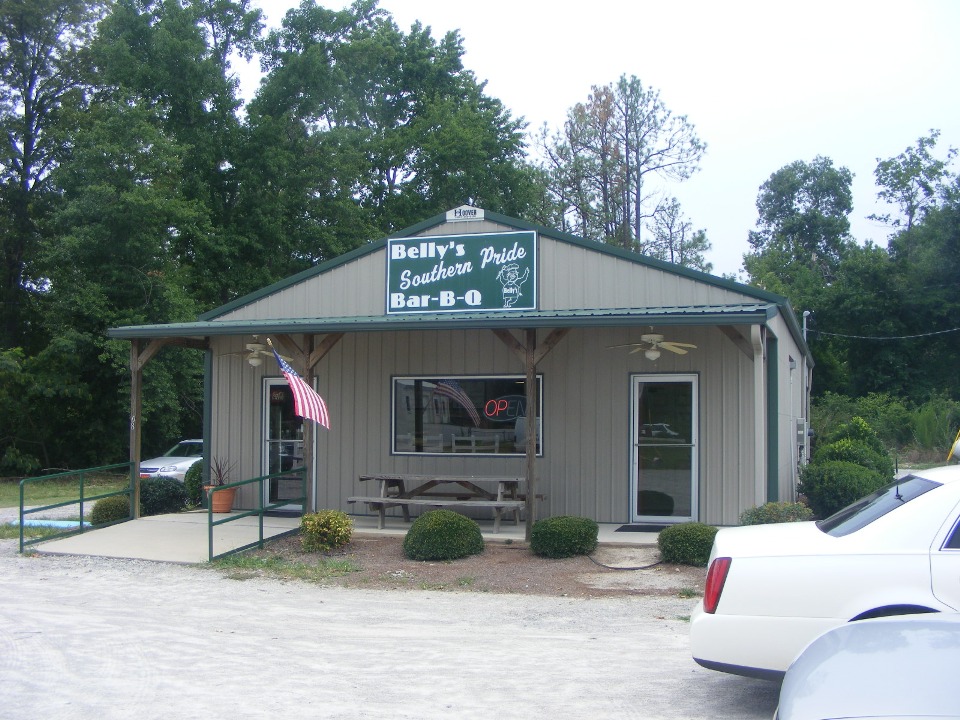