July 3, 2010: The morning started off with a takeoff at 7:43 AM from Folks Field bound for Dublin, Georgia.  I snapped this photo with engine running right after my run-up to test the ignition systems.  This was a hazy morning with broken and scattered cloud layers along the route to the Atlanta area.   I climbed up on top of the clouds at 7,500 MSL remaining in VFR conditions.  I settled on 9,500 MSL for the smooth and cool ride most of the way to Dublin.  The Garmin GPS 296 reminded me to begin my descent at a distance of 38 miles north of the Dublin airport.  The flight down to Dublin was my usual path around the East side of the Atlanta Class B air space arriving at Dublin about 9:05 AM. 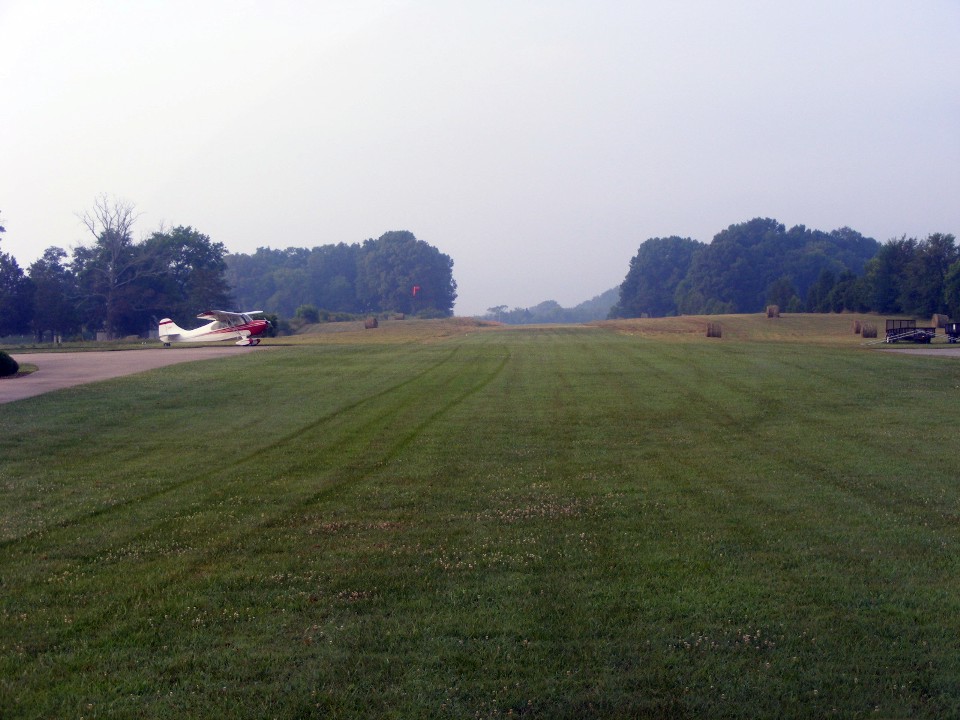 I took this photo on the ramp with my friend and former QRF boss, Fred Rogers.   The flight today is to give him a ride up to his nearby log home for aerial photographs of the area around his property.  As always, I give the walk around of the airplane for first timers to let them know all the key features of a home-built airplane, safety features, etc.  Fred is tall in the torso.  I had to remove the wedge block from under the seat cushion to give him the proper room in the seat below the sliding canopy. 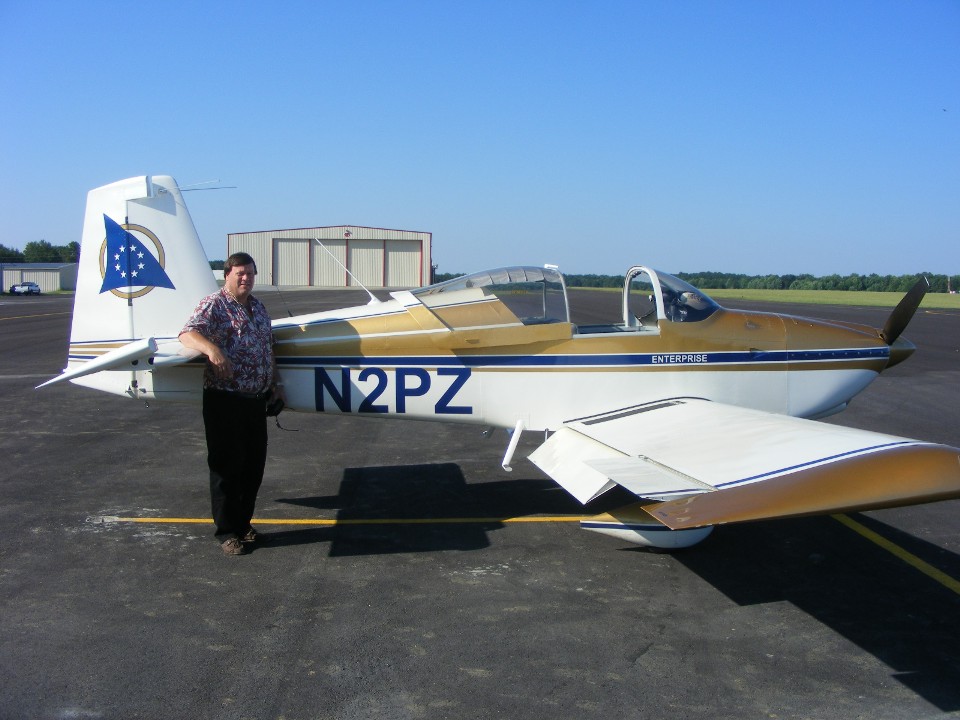 The visit to any airport is always a chance to meet other pilots.  One RV builder had come up to speak to me when I was getting ready for the local flight a few minutes after I took this photo above.  He mentioned that he had seen this web site and knew I was from the Chattanooga area.  He had just filled the tanks on his RV and was heading out for a flight.

After our 30-minute local flight, Fred takes a call from one of our long-time cable television friends while sitting on the front porch of the FBO on the ramp at Dublin.  I liked this shot with the profile, but realized I needed to take another photo from the front with proper exposure and lighting. 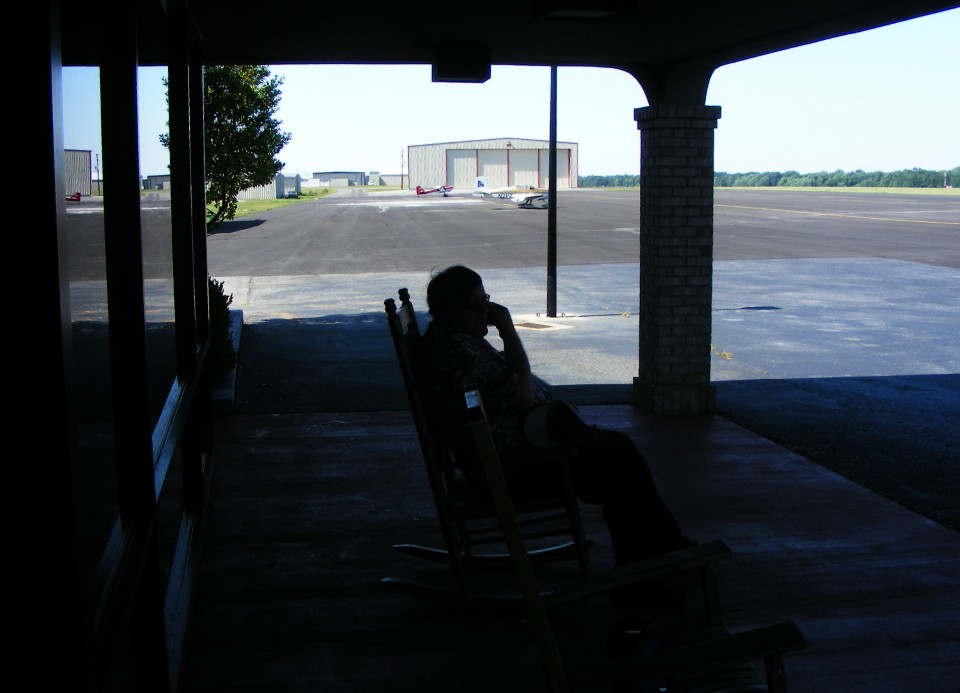 Here is that photo from the front and I planned to be in the shot reflected from the windows of the building. 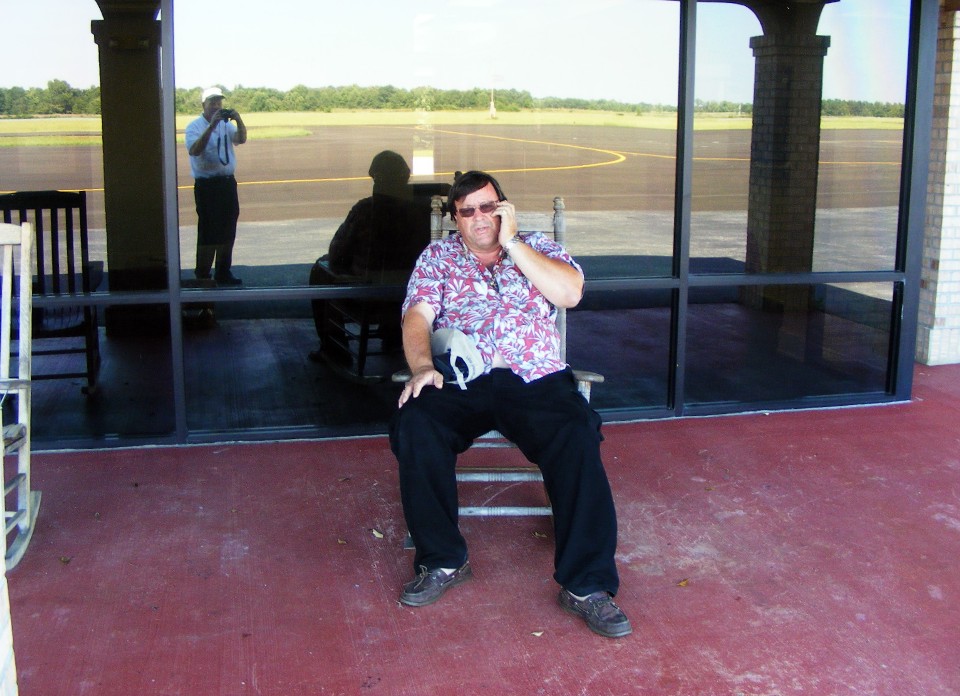 The pilot of this RV-10 is William Duke.  He spoke to me at the FBO office about 10 minutes before I snapped this photo.  He has a grass strip about 10 miles south of here at his home near Dexter, Georgia.  He was departing after getting fuel here at Dublin.  He bought the airplane from the original builder, Joe Schumacher, a prolific builder from Texas. Although William did not build this airplane, he has built other airplanes in the past. 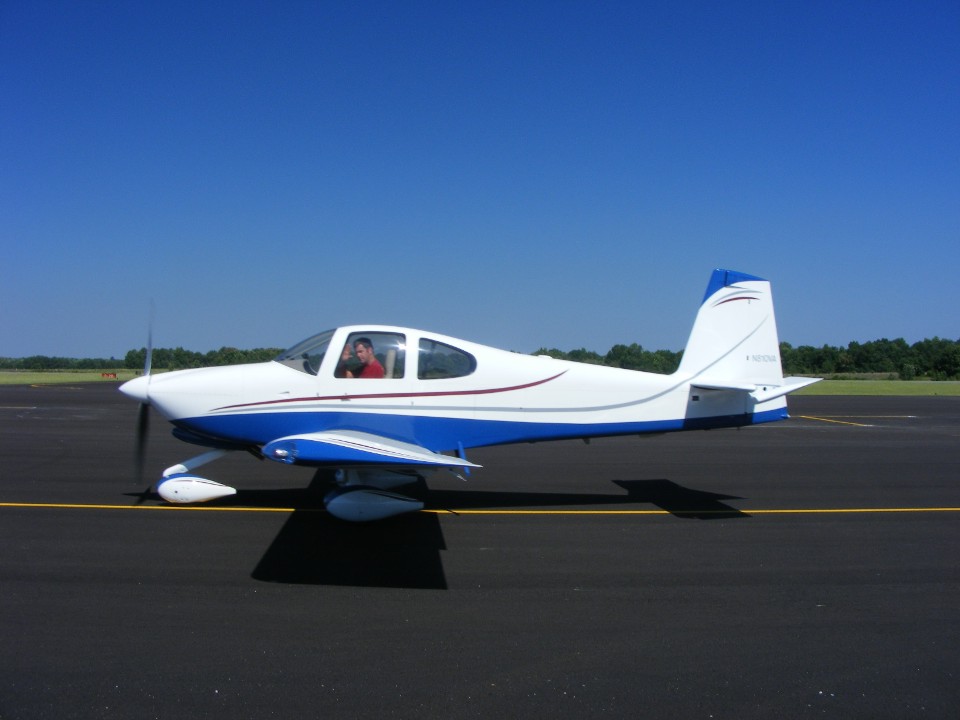 As I normally do at any new airport for me, I took this photo on the ramp showing the FBO here at Dublin, Georgia.  Fred is approaching me still talking to our old friend on the phone.  He asked Fred to let me speak with him.  We have known each other about 39 years since I first started in the cable television industry in 1971. 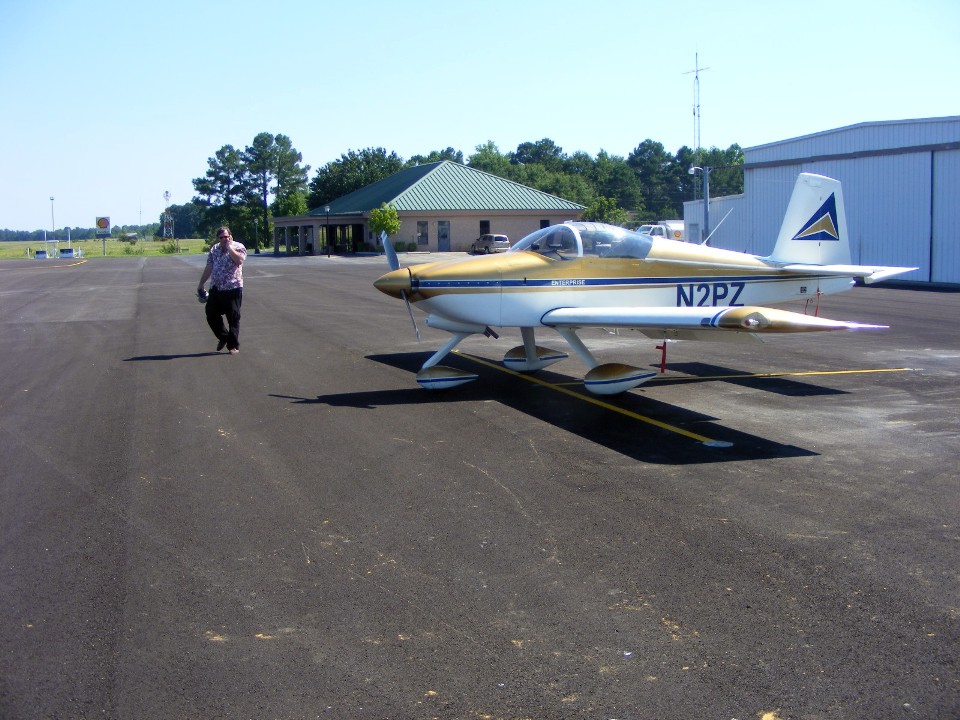 Fred wanted me to see his lovely log home before my return trip home.  It is secluded from the road out front, and has a view of the nearby lake north of here. 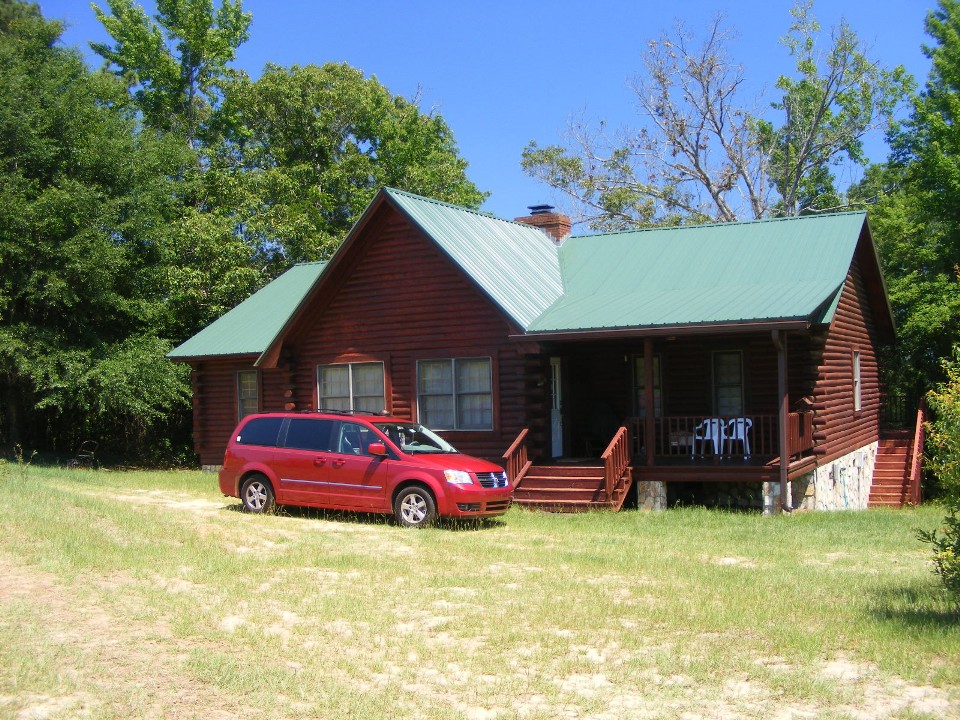 Fred's wife Angela gave me the tour of the inside of the home here with its personal decorations and memorabilia from numerous travels and adventures.  The house is not visible from the road just over the rising terrain seen in this photo from the front porch looking south. 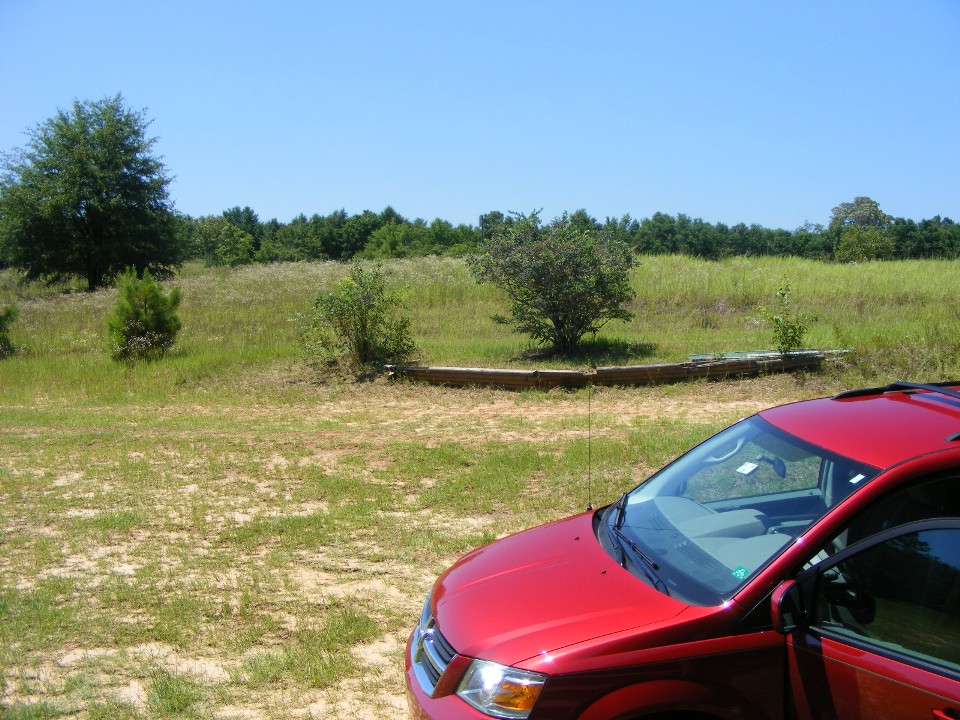 We went into town for lunch before heading back to the airport.  I showed Angela my airplane and its features for safety and navigation before taking this photo by the fuel pumps. 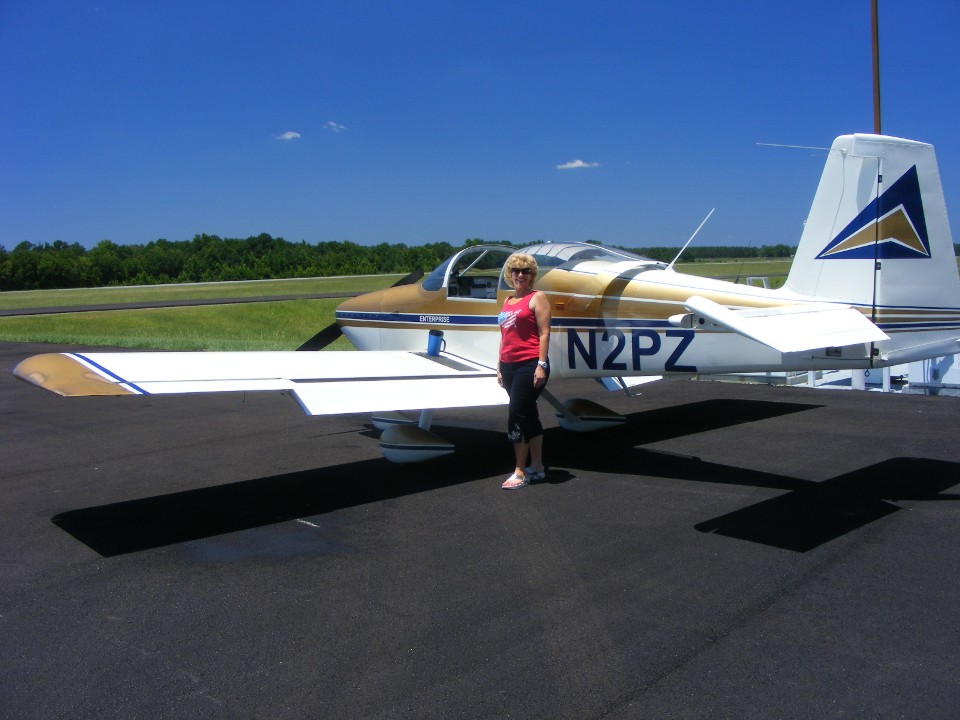