November 22, 2012:  The Thanksgiving Holiday here in the USA falls on another day that lives in infamy from 1963.  Let us not forget the early Pilgrims to this land and give thanks to all who have given so much to this land.  The flying weather today is beautiful in central Florida, but family comes first here at home.  The turkey is in the oven in time for an evening meal.

This day gives me a chance to browse the web and one of the places I went was to read an article about Jon Johanson.   After reading that article, I checked my page from Oshkosh 2004 when I met him at the Van's Aircraft banquet.  I found the link to the stories about Jon had been removed from the Van's Aircraft web site when it was updated.   I sent an email to Bob DeVore, the webmaster at Van's hoping he still has the web page files.   I offered to post the articles on this web site.

I have been thinking about this project, the airplane, the web site about it, and the places I have been with it that are documented in these pages.  There is much to be thankful about.  When I was reading the article online today about Jon, I realized we both had the same hopes, and doubts about building an airplane.  I was also checking the new Van's Aircraft web page showing the number of completed RV's that have been flown.  On the day my airplane was added to the list, my RV-9A was number 155 to fly.  As I write this entry, there are now 761 RV-9 and RV-9A airplanes that have been completed and flown.

November 24, 2012:  It is Saturday morning and a trip to the airport was needed to get my airplane out of the hangar before the hangar floor gets resurfaced this coming week.  I wanted to check on the fuel drain port for the right wing fuel tank to be sure it is not leaking. 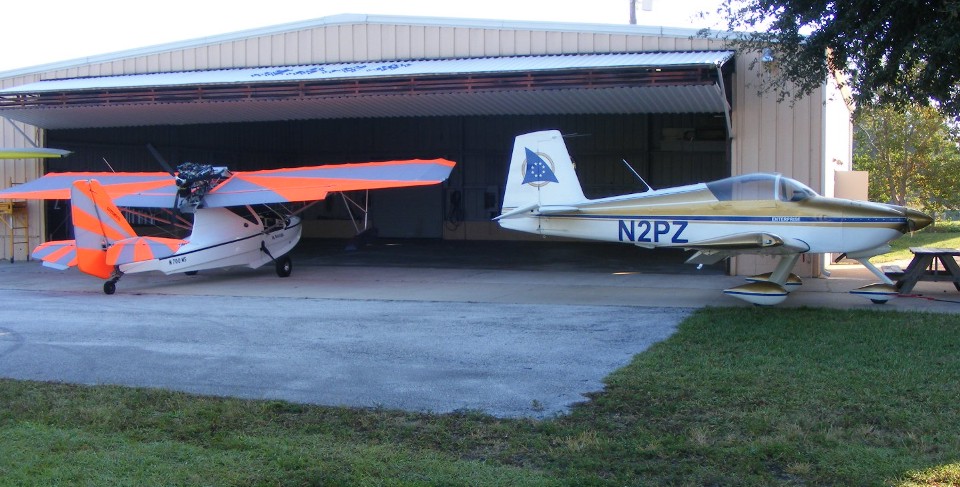 During this week, the surface of the concrete floor will be ground away before epoxy paint is applied.  The Aventura light sport amphibian belongs to the airport manager Bill Simmons.  He told me the details of the work to be done to put a new surface on the hangar floor.  He will be moving both airplanes as needed during the work to done inside the hangar. 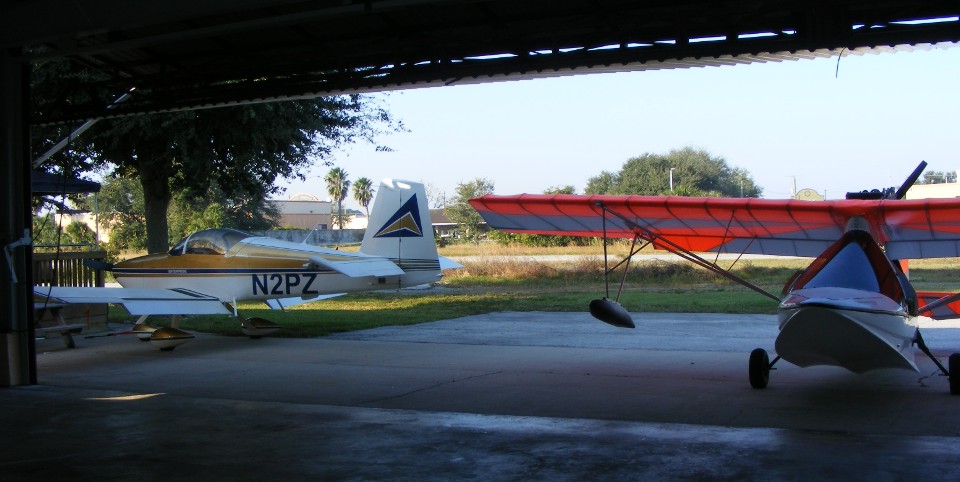 December 1, 2012:  This photo shows the work inside the hangar to resurface the floor is now halfway completed.  I checked the battery voltage of the airplane and find it is acceptable.  Bill has been moving the airplanes in and out of the hangar while the refinishing is underway. 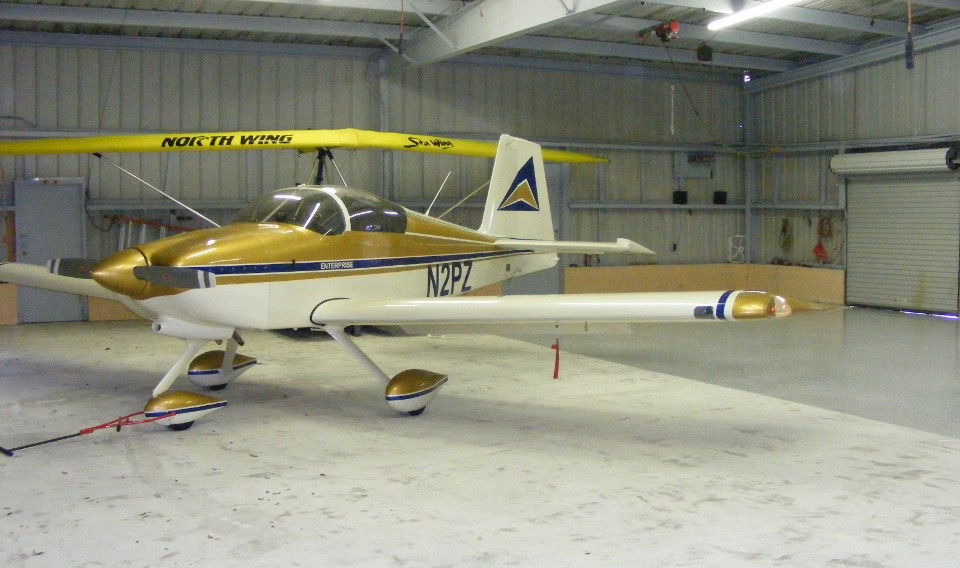 I have another company road trip coming up this week which will last at least two weeks, or maybe three.  I am heading for a fiber optic project at the DFW Airport.  That puts me in close proximity to Doug Reeves and others at Northwest Regional Airport (52F) north of Fort Worth on that weekend before I have to install a DWDM fiber optic system and provide training to the folks who will be maintaining the system.  Either way, the trip will be over before the Christmas holidays begin.  The next flight of the Enterprise should be on December 23 when my grandson from Texas will have his first chance to get a ride.

Van's Aircraft webmaster Bob Devore sent me a reply on November 28 saying they have decided to publish the Jon Johanson stories in their NEW  web site format.   He credits my email as the reason they are bringing back the articles of an RV-4 that circled the globe three times and was the first home-built airplane to land at the South Pole.  The articles will be part of the archives section of Van's web site.

December 3, 2012:  I got on the road for a long road trip for my day job.  I had two sales calls in Jacksonville, Florida this afternoon to talk about fiber optics communications for television and satellite signals via single-mode fiber.  I continued to Tallahassee in the evening to begin with two meetings there on Tuesday, December 4, then continued to Pensacola after lunch for two more meetings.  I spent the second night in a hotel in Pensacola and called three clients Wednesday morning for possible meeting in Mobile, Alabama, New Orleans, and Baton Rouge, Louisiana.  All three of those customers had schedule conflicts that would not permit me to pay them a visit on this trip.  This prompted me to drive to Houston, Texas where I had more customers available for meetings on Thursday..

December 5, 2012:  With no customer meetings on this Wednesday, I found myself with some time to see the Battleship USS Alabama at permanent anchor in Mobile Bay.  This is a wonderful museum of World War II history.   I had seen it twice before in the many years of my travels.  I wanted to take a look today and get a quick look into the new aviation hangar. 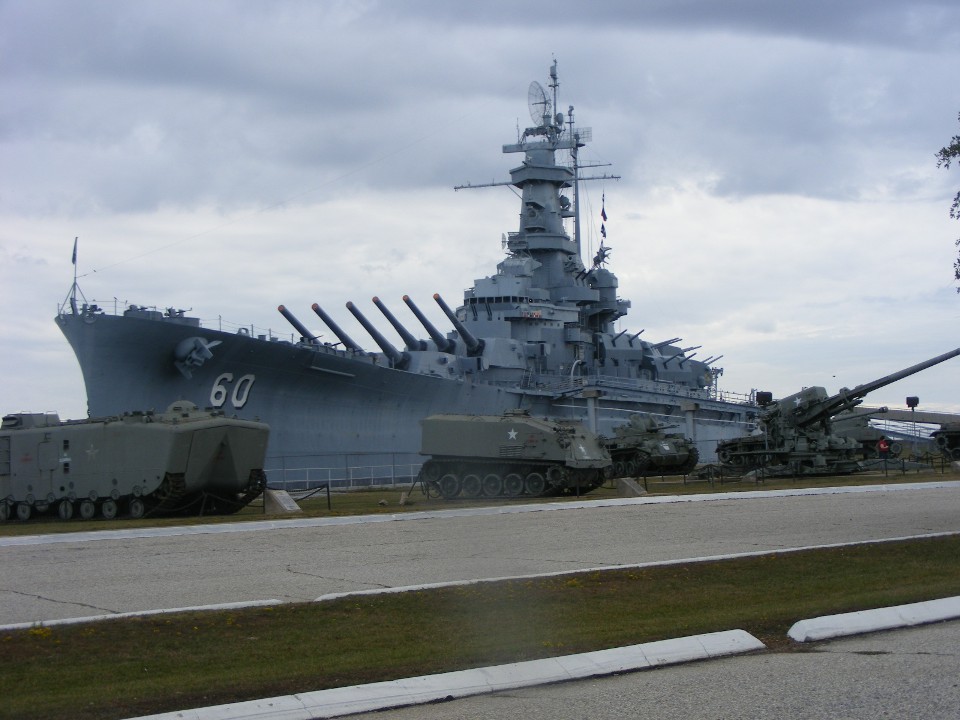 There is much to see on this ship with exhibits in many areas below decks and topside.  There are two 16-inch gun turrets forward and one 16-inch gun turret aft.   These guns can fire 2,700 pound high-explosive projectiles up to 21 miles for bombardment of enemy shore installations or against enemy ships at sea.  The USS Alabama was the last of four ships built in the South Dakota class of battleships. 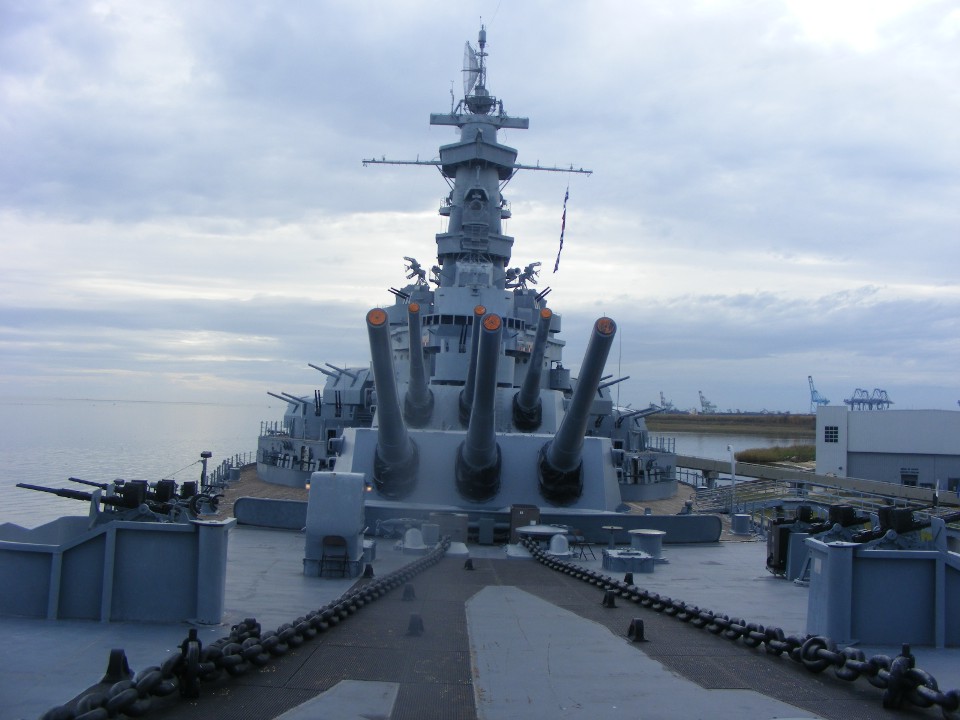 Here is a look at some of those high-explosive shells in the Barbette below gun turret number 2.  These shells are almost 6-feet tall. 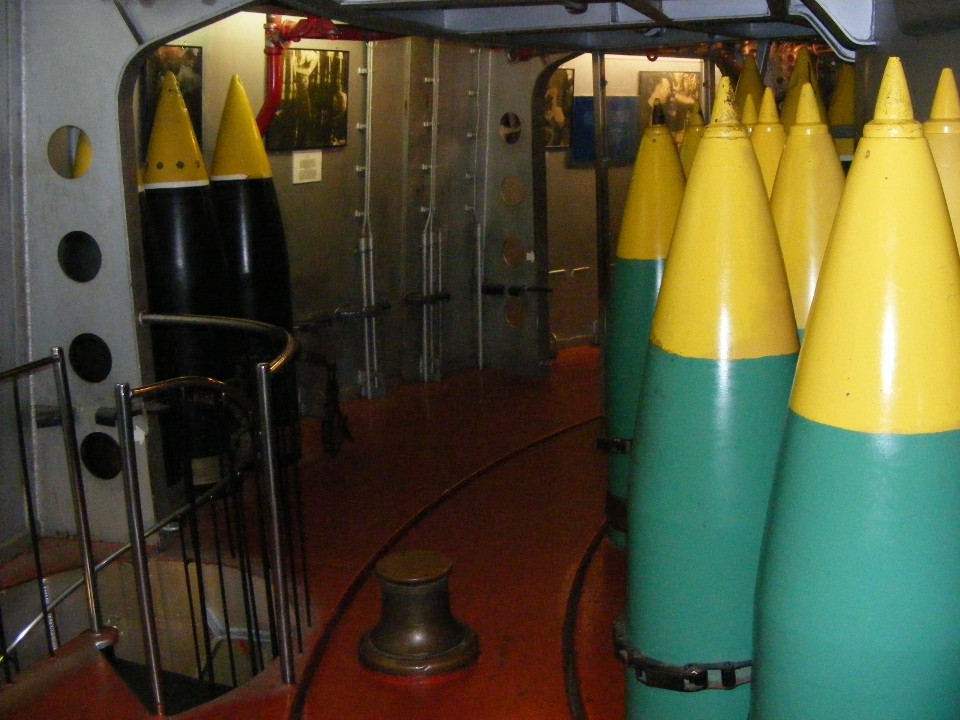 It takes three silk bags of gun powder to fire these shells the full distance of 21 miles.  This is a view in the bottom Barbette.  They are lifted by that elevator up to the guns above in the rotating gun turret.  Take note of the round gap in the floor in this photo and the floor in the photo above where the shells are stored.   This whole center section rotates with the guns as they are aimed at the target. 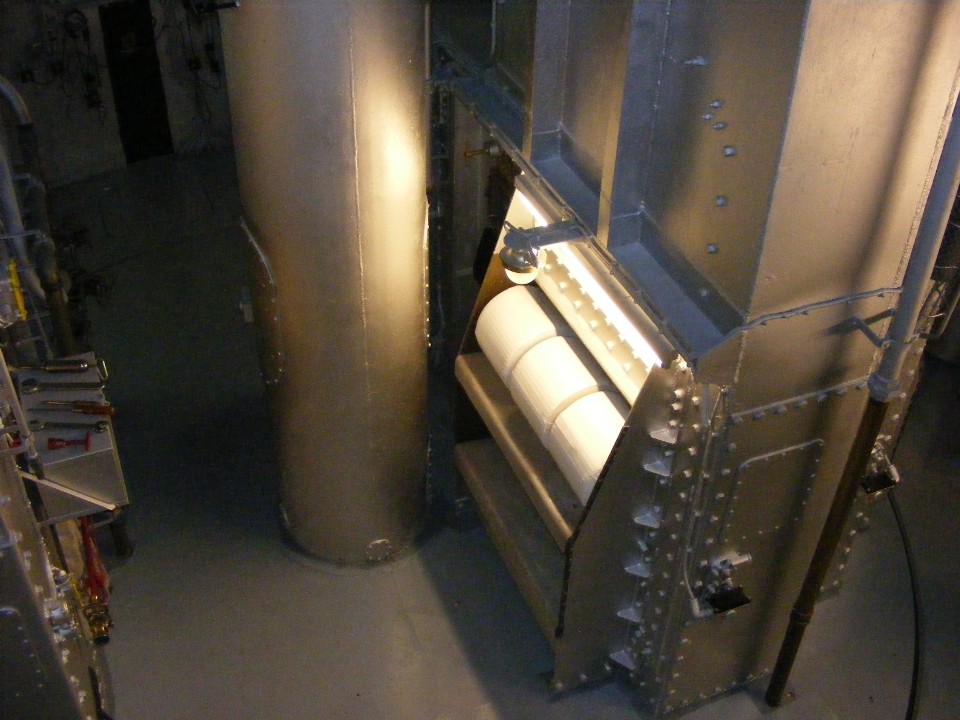 These signs on the wall give details of this exhibit. 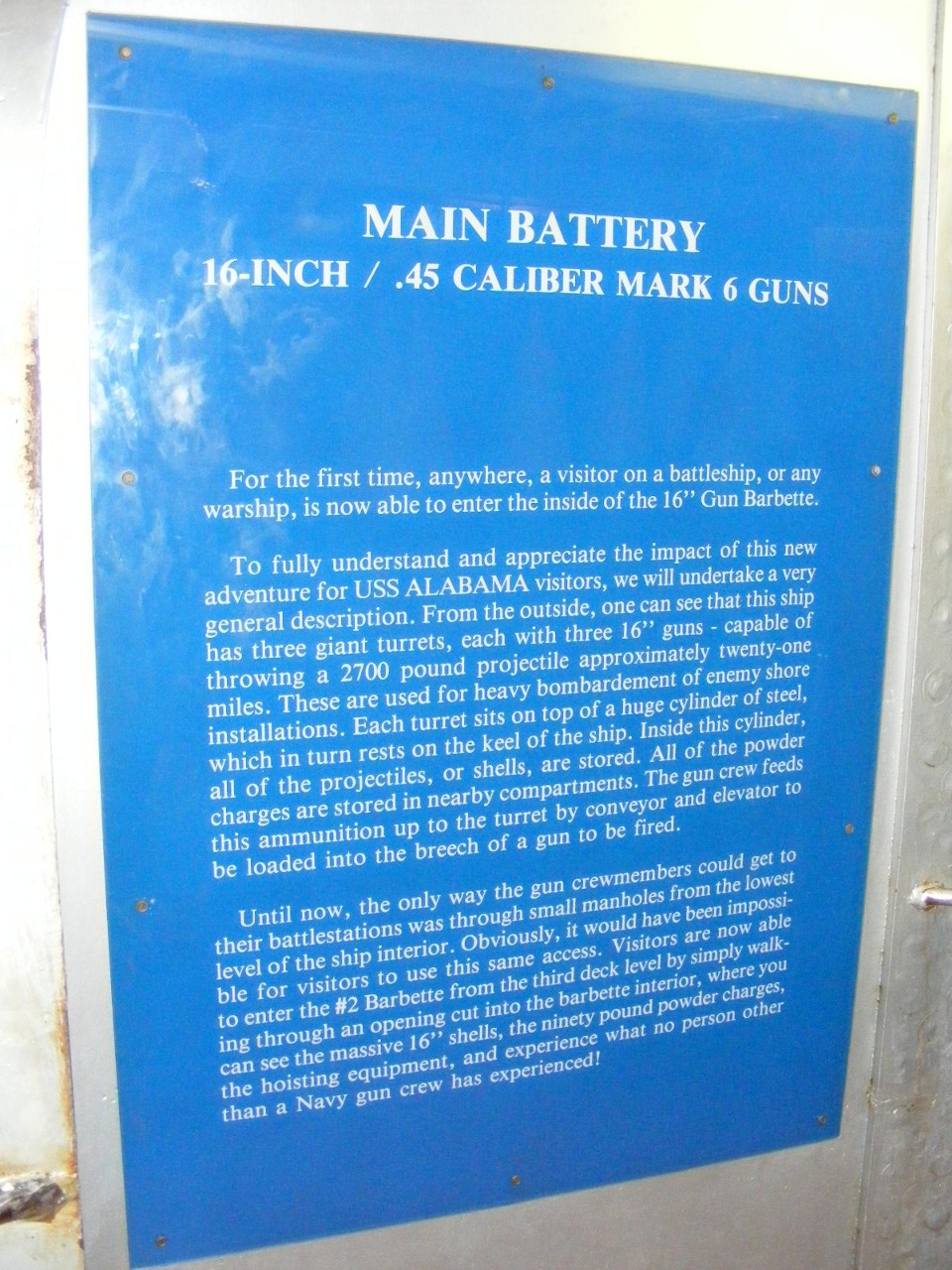 The wall of the Barbette is is very thick where the access walkway was created with cutting torches. 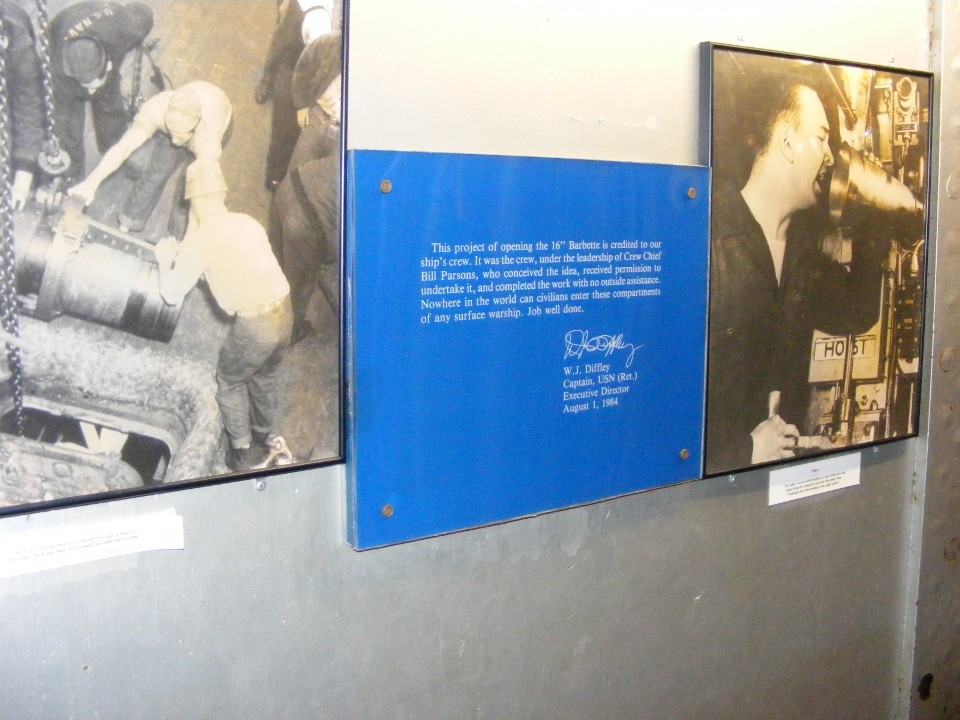 The battleship park also has the W.W.II submarine USS Drum which is also open to visitors.  It is completely out of the water now.  When I first toured the sub many years ago, it was still floating at anchor.  This photo shows a few aircraft from the 1950's and 1960's that are on display.  There is a building between the sub and the battleship with other aircraft on display including a Curtiss Kingfisher that could be launched from a catapult on the battle ship.  A forward observer and a pilot in the Kingfisher would help to direct the firing of the 16-inch guns on distant targets.  These were float planes that could return and land next to the ship and be recovered by a crane.

You can learn more about the USS Alabama via this web page and by a Google search of other web sites of other travelers who have also taken the tour and posted photos of their own, especially inside the big gun turrets where those big shells are loaded and fired.  Just search with the words USS Alabama on Google and you will get plenty of information and photos of this ship and many more photos.  You will find out how may US Navy ships have been named for the state of Alabama.

I spent the remainder of the day driving to Houston, Texas.  I had three customer sales meetings on Thursday, December 6 in the Houston area then drove to San Antonio where I had two meetings there Friday, and one more meeting near Austin, Texas late in the day.  I spent Friday and Saturday night with my son and his family in Round Rock, Texas before traveling to the Dallas-Fort Worth area Sunday afternoon.