May 7, 2015:  WHAT?   Oh, sorry, I could not resist putting in the first view of Folks Field before the take off at the beginning of the Alaska adventure.  This is the opening scene from the GPS tour that runs in Google Earth.  It can take us all on the trip that Wendell and Terry experienced. I published these 50 pages in 2007 after they returned from Anchorage, Alaska.  The photos and highlights of the trip are described in these pages.

While taking this trip, we can pause the tour to see details of what they saw by using the manual controls of Google Earth to look in any direction, and from any height above the ground.  When you push play, the tour goes back to the coordinates where you pressed the pause button. You can enjoy the view without leaving the comfort of your home.  This screen capture below shows you what will be on your screen as you begin the tour and take the ride.  Each one of those numbered track files is a GPS log of the flight segments from the trip.  If you have not been to MY Google Earth page to get the Garmin data base file, now is a good time. Come back here to read the pages that apply to each GPS log file as you view them in Google Earth.  IF you have two computer monitors, get one screen showing these web pages, and the second one running Google Earth when you load and start the GPS file.  Sorry, it does not rain on the "Google Earth" world as you can see in the image below.  The time stamp in the black box is not 2007 and shows a more current YEAR to get better scenery details.  The view is correct as I have seen every time I took off from Runway 19 at Folks Field. 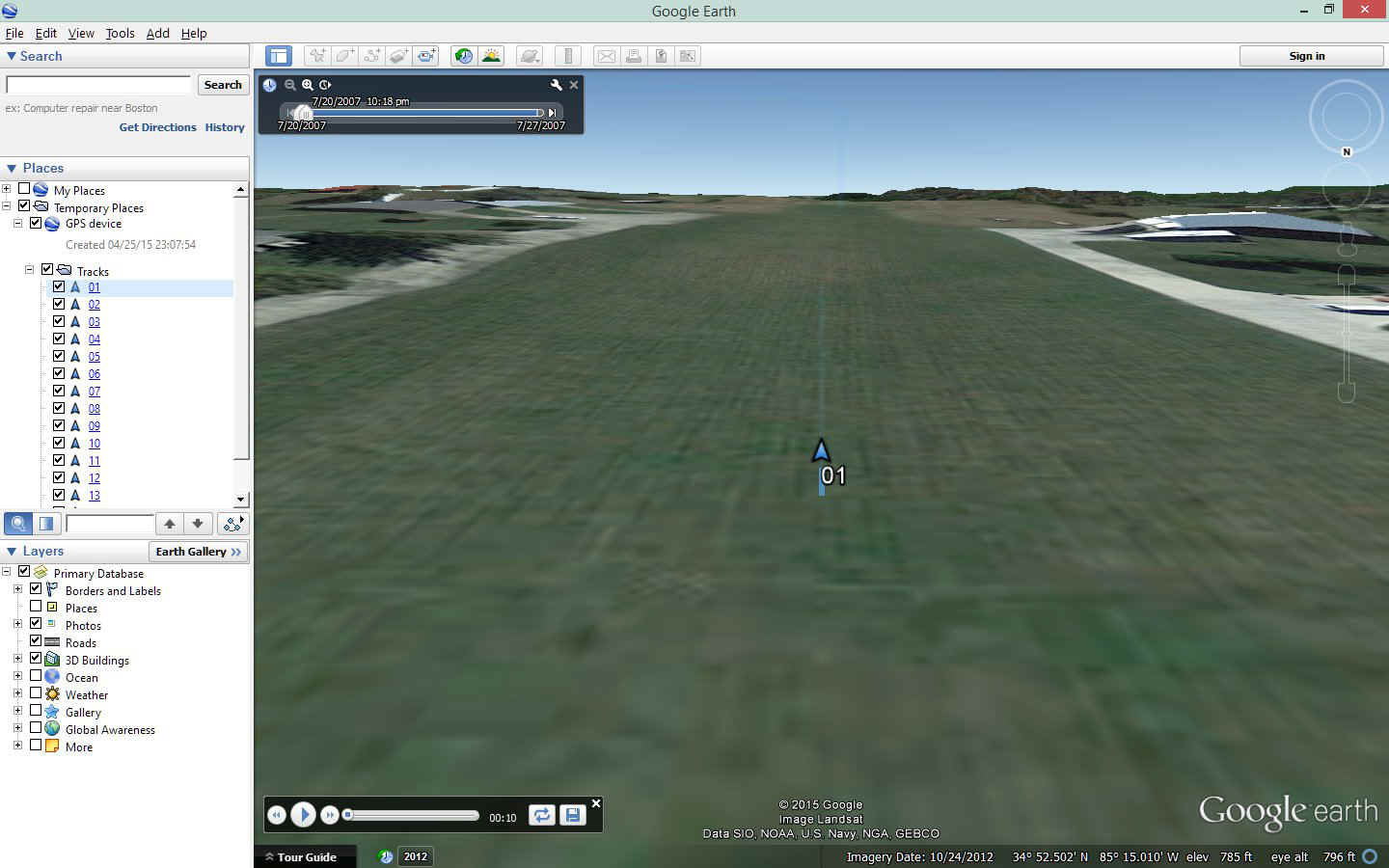 July 20, 2007:  The first day began with rain in the Chattanooga area as seen below.  This photo was taken with Terry's camera while crossing the junction of Interstate 75 and US 41 at exit 345.  The junction is directly below the airplane and not in this photo.  The view is looking north with the CSX railroad coming in from the bottom center of the photo and curving toward the gap near Ringgold, Georgia.  This location is about 10 miles East of Wendell's home field.  US 41 comes into the photo near the bottom right roughly parallel to the railroad.  Georgia highway 2 is coming in from the right side below the strut to join with US 41 as the highway turns west toward the gap. 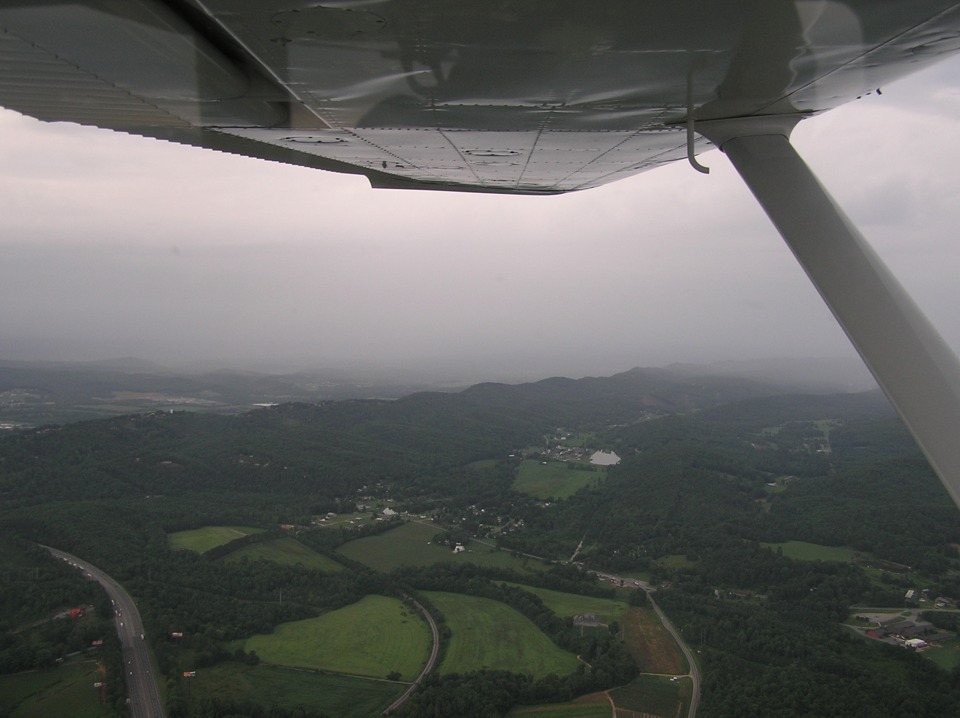 This map shows the approximate route of flight from Wendell's strip to US41/I-75 shown in the photo above.

This photo was snapped at 8:02 AM not too long after the above photo. (I would later learn the clock in Wendell's camera was OFF by four minutes from true time from the GPS track files.) The route of flight is EAST to get around an approaching rain storm into VFR conditions ahead. 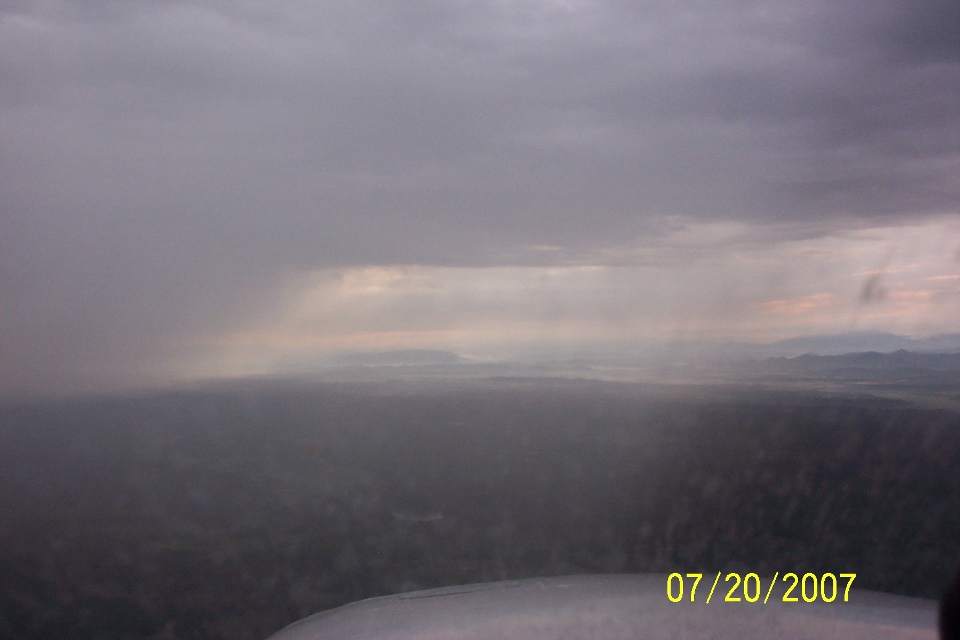 This photo from Terry's camera focused on the windshield, giving a slightly different view of the rain in front of the airplane.  When I got the CD-ROM with all of Terry's photos on it, the date and time of all the photos were the same.  He had never set the clock in the camera.  More about that later. 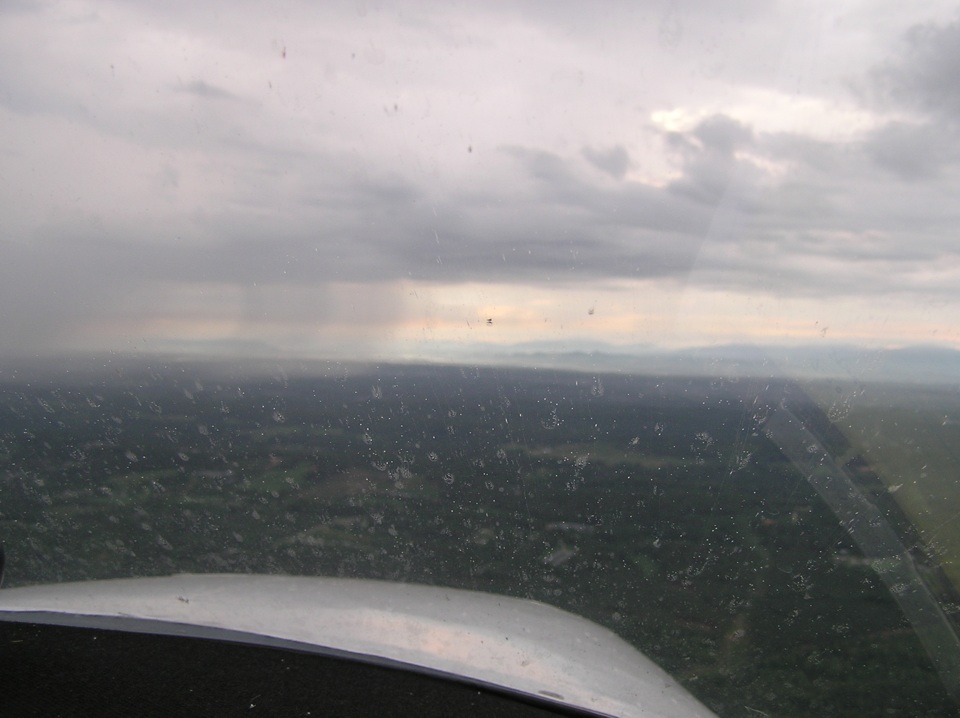 For you map fans out there, here is an idea of where the flight route began.   Unfortunately, the GPS only stores 10,000 data points in the ground track memory.  The early part of the ground track was over-written when the GPS was used in the Anchorage area for ground navigation.  Wendell guided me with a verbal description to create this map segment for the flight path around the rain storms.   The RED track is hand drawn on this map from 2007, while the BLUE track is the beginning of the actual GPS ground track.  May 7, 2015:  I used some GPS data points from a take off I made from Folks Field in my RV-9A to show what they would have seen that morning in 2007 (minus the mist and rain they had on that day).   I supplemented my real GPS data points to finish the RED track in the map below and connected those GPS data points with the real data points from the 2007 flight.  I had to put date and time for that day into the GPS data points I created.  The first data point in the file was set at 7:48 AM Eastern Daylight Time.  I had hoped to take some photos before they departed, but I arrived about FIVE minutes too late that morning.

Here is a "big map" of the complete trip.  It shows each day's flights in different colored GPS ground tracks.  I will also be zooming in on the GPS ground tracks and providing additional maps where they may add some understanding to the various photos seen in these pages.

This photo was taken at 8:31 AM.  The Tennessee River and the town of Rockwood are ahead under the cloud deck below.  How do I know that?  I found a way to download the GPS ground track data points into a spread sheet file.  It shows the latitude and longitude for each data point in the ground track.  It also includes a date and time stamp for each data point, along with speed, and altitude.  I was able to correlate the photos to the map locations by comparing the data in the GPS data file with the time stamps on the photos. 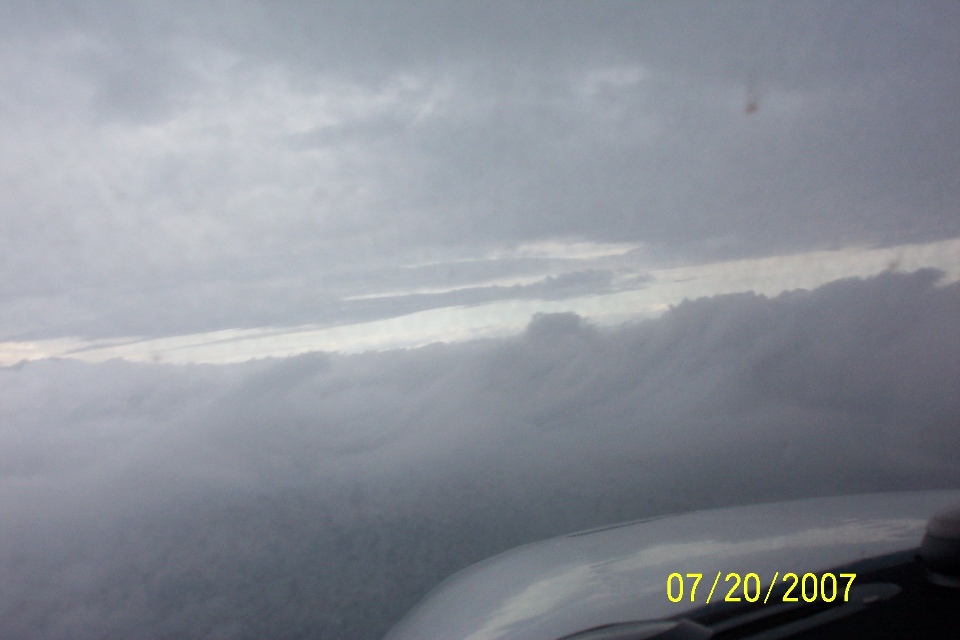 Blue sky is approaching.  This photo was taken at 8:53 AM about 10 miles NW of Crossville, Tennessee and shows clearing weather ahead as seen earlier that morning on weather radar.   Wendell has his Garmin 396 with the Nexrad radar updates to guide them around the rain showers.  So far, the trip has been around or between cloud layers without the need to file IFR.  At this point the airplane is only 88 miles from home, but the flight path to get here was around 125 miles of detours to the EAST before turning on course toward the northwest.  The headwinds at this point are reducing the ground speed to about 125 MPH.  Earlier the GPS ground speed was down around 87 MPH. 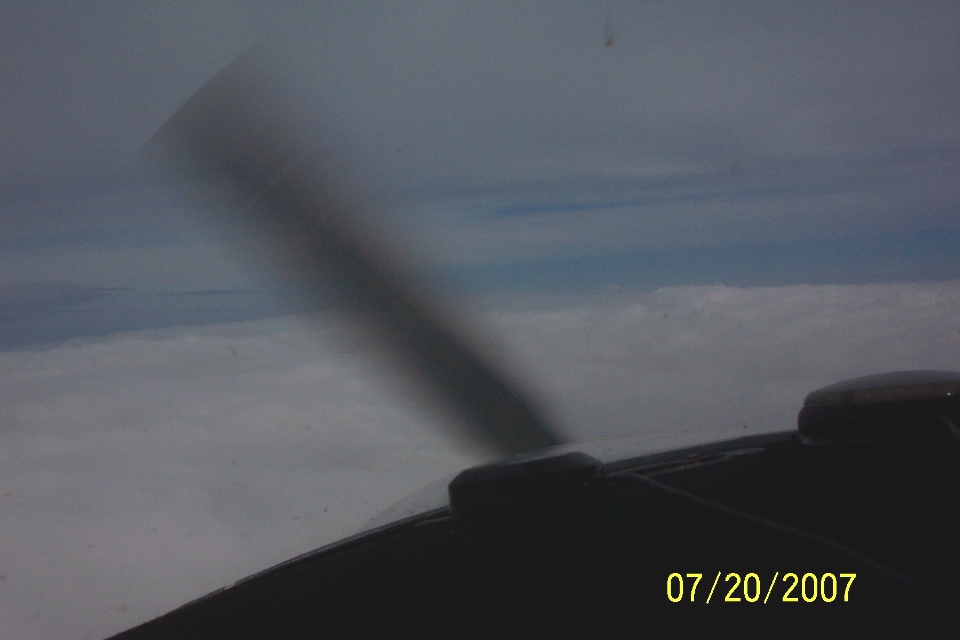 The closer they get to the end of the rainy weather, the better the sky begins to look ahead. 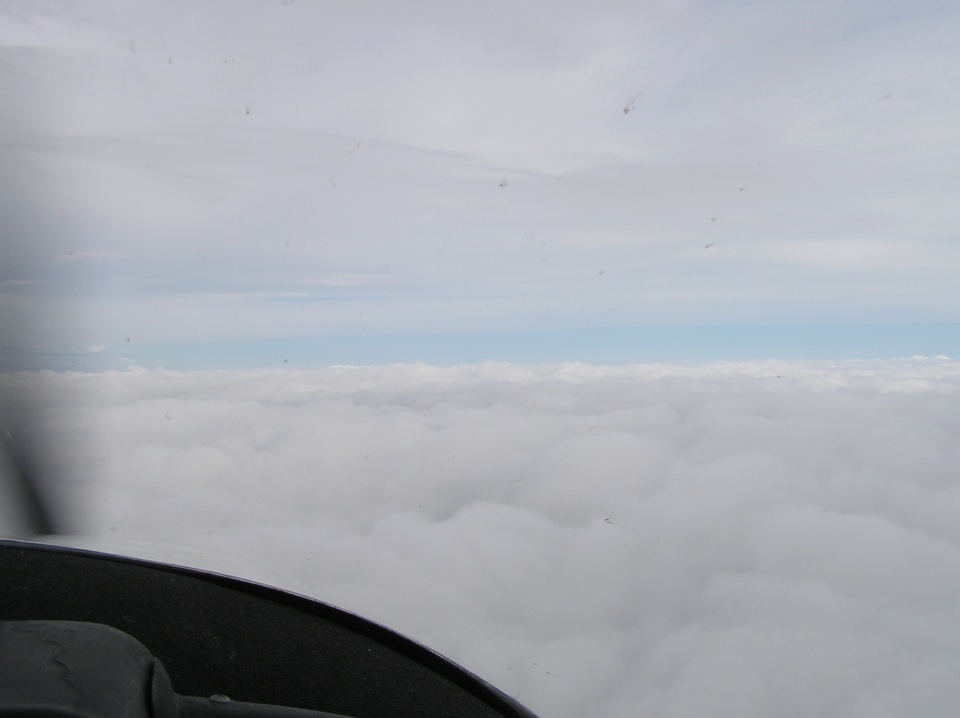