July 20, 2007:  This shot was taken at 9:58 EDT while flying on a NW heading near Beaver Dam, Kentucky.  The Green River Parkway and the Western Kentucky Parkway cross paths below on the left side of the airplane.  The GPS reports an altitude of 8,899 feet on the data point that matches the time stamp of the photo.  The actual altitude they were flying was about 8,500 feet MSL.  (The altitude part of the GPS data is the least accurate.)  The GPS reported ground speed is just over 108 MPH, indicating the headwinds were still a factor near the weather front that had just cleared the rains from this area of the country.  For those of you who may not be familiar with GPS receivers, the use of wide-area augmentation system (WAAS) signals improves the accuracy of a GPS receiver to within 7 to 10 feet of actual global coordinates on the Earth.   The X and Y solution of latitude and longitude is very accurate, but the Z (altitude) can easily be off by a few hundred feet in some cases. 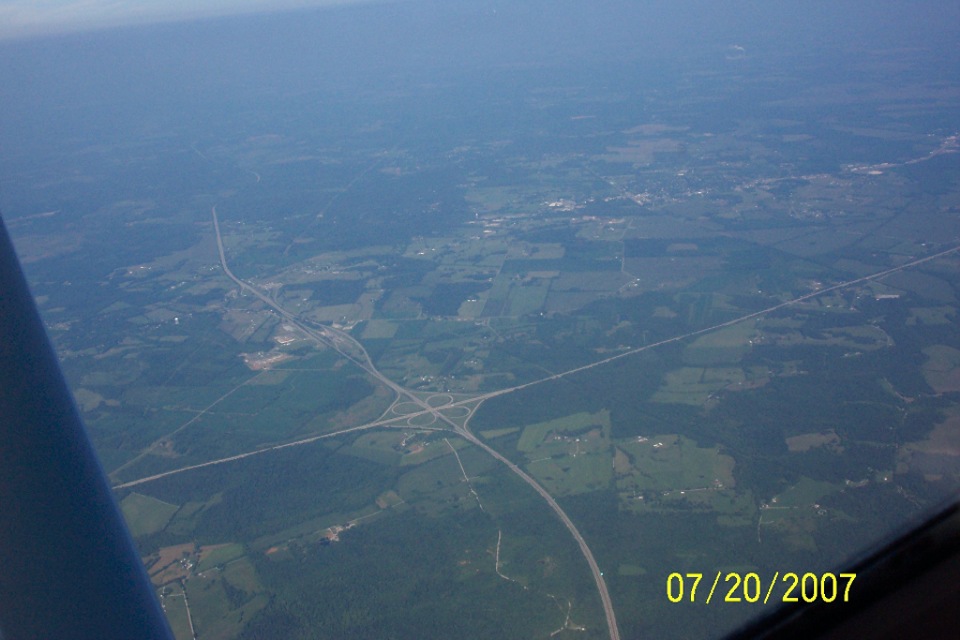 Here is the matching map of the area seen in the photo above.  The blue line is the GPS ground track with the route of flight from lower right to the top center of the map.

This is Owensboro, Kentucky on the south side of the Ohio River taken 10:12 AM Eastern Time looking north into Indiana.  Terry took a similar picture a bit further away from the city.  It had more haze in it, so I did not use it here. 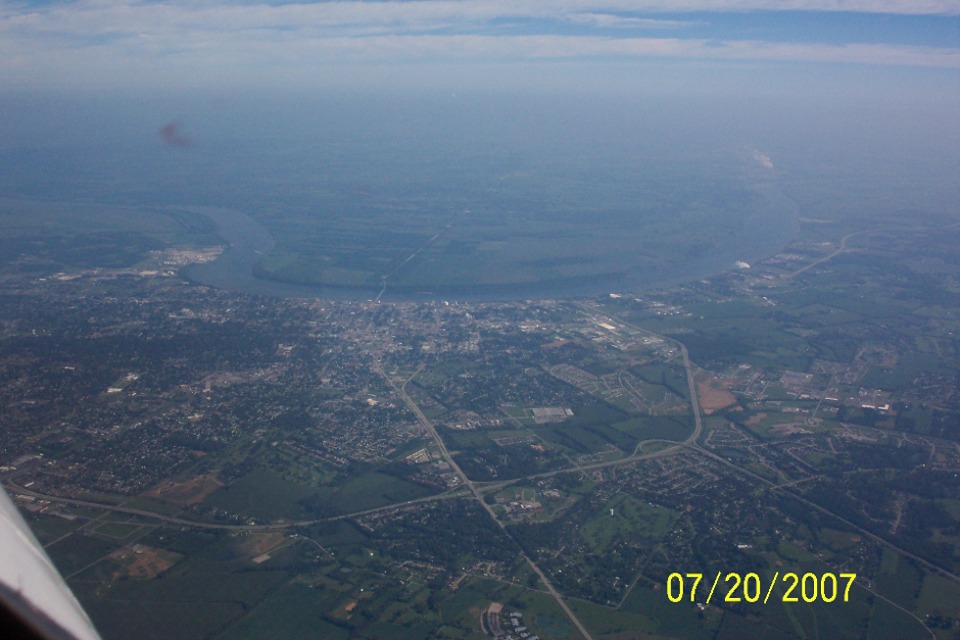 And just a few minutes later at 10:28 AM EDT, Evansville, Indiana passes under the airplane while making a ground speed of 125 MPH.  This view is looking west as the Ohio River passes south of the city.  US highway 41 is at the extreme bottom left of the photo, while Indiana state route 62 is the road disappearing to the west from the heart of the city. 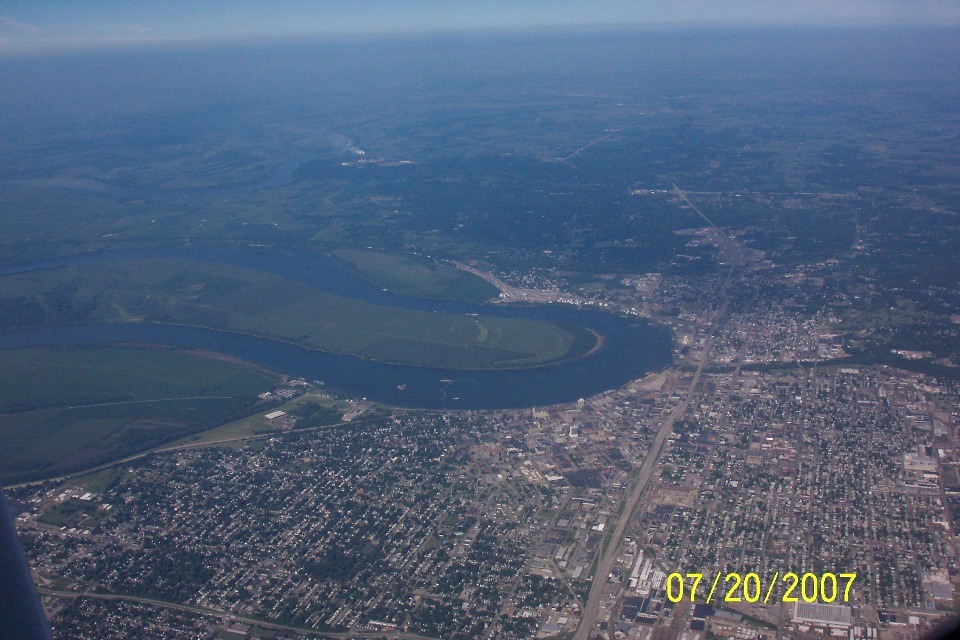 Terry took this shot of the Evansville Regional Airport from the right side of the airplane.  US 41 is the highway that runs past the airport on the left side of this photo.  North is toward the upper right corner of this picture. 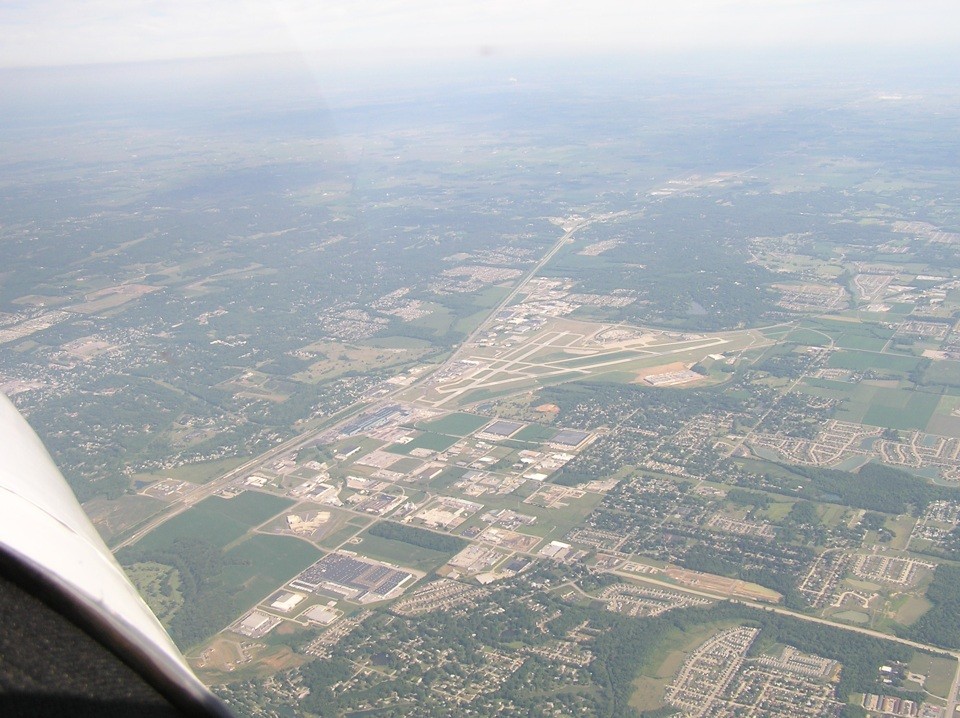 The arrival at Litchfield, Illinois was at 11:37 AM for a fuel and lunch stop.  The self-serve 100LL fuel price was $3.80.  They used the courtesy car for the short trip to McDonalds for a fast food lunch.   As with many city-owned airports, the courtesy car is an old retired police car, etc.   The GPS was powered up at 1:07 PM EDT before the departure for the afternoon flight session. 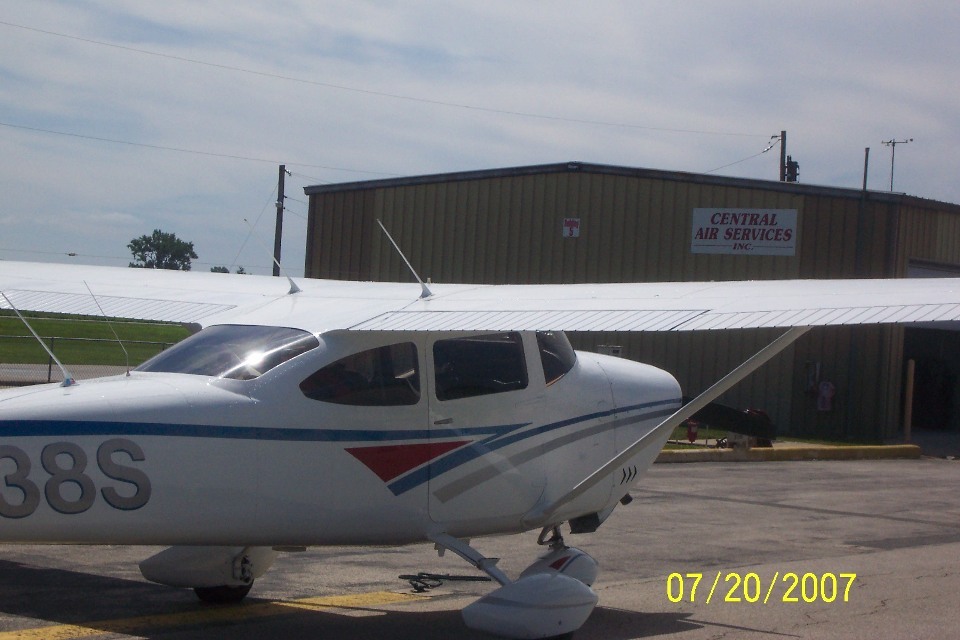 This is Terry's photo taken on the ramp at Litchfield.  I examined the GPS ground track closely and noticed the airplane had been moved on the ramp after fueling. 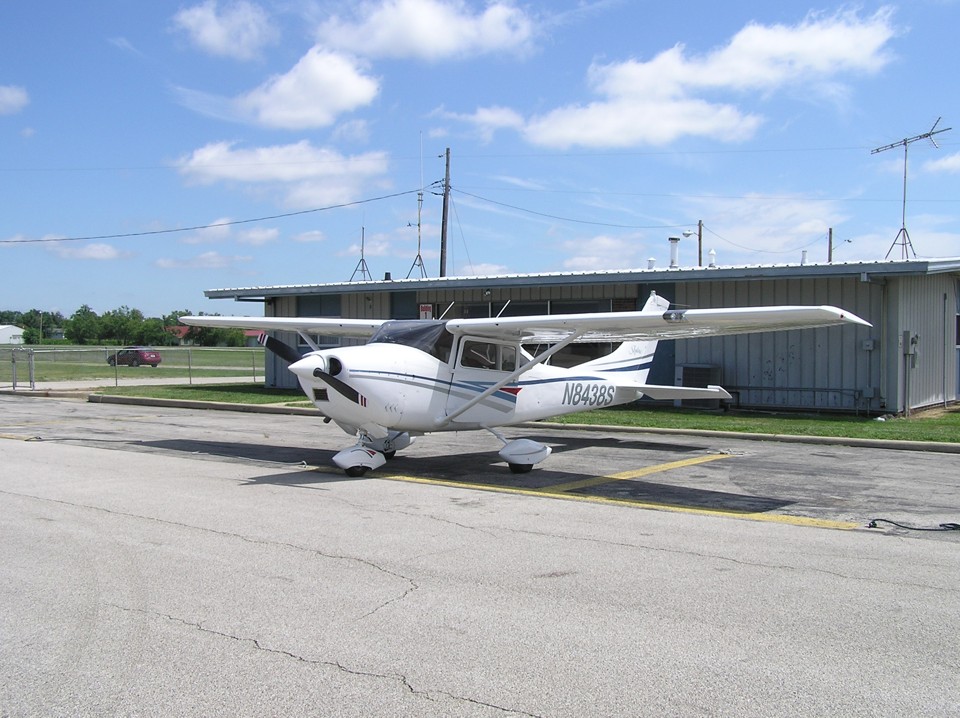 Here is the map view of the landing and departure from Litchfield, Illinois.   The landing was on runway 9 with an approach from the west.  The departure was on runway 36 before turning on the northwesterly course for Mitchell, South Dakota.   The Litchfield airport is located just 52 miles up Interstate 55 from downtown St. Louis, Missouri.