July 21, 2007:  Day TWO continues with a fly-by of the town of Sturgis, South Dakota.  This place is the "Oshkosh" of motor cycle riders.  Just like the swallows return to Capistrano, bikers head for Sturgis in the summer.  And if by any chance, there is someone who is reading this that is NOT a pilot or aviation enthusiast, Oshkosh is the home of the Experimental Aircraft Association.  They put on the world's biggest air show every year that lasts a full week - AirVenture.  I have been there twice with my home-built airplane, as have so many other pilots - builders and non-builders alike!

As for this picture, both Wendell and Terry took identical pictures of Sturgis at almost the same time.  Wendell's camera had an exposure that shows more details in the clouds and landscape.  The rich dark green of the forest contrasts with the grasslands beyond the ridge line ahead.  That is Interstate Highway 90 coming in from the right side of the photo. 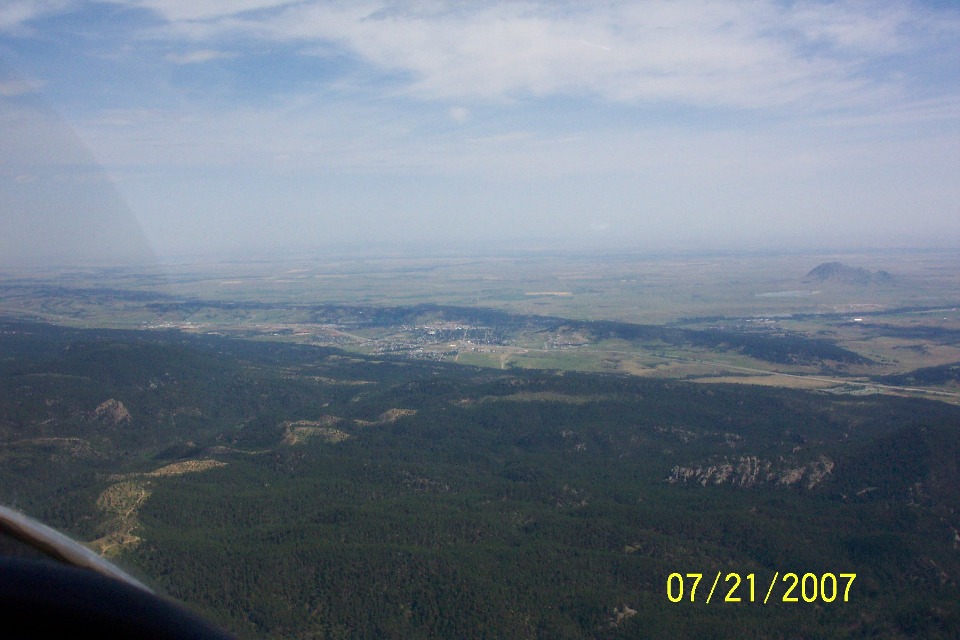 Here is a better view after a turn parallel to I-90 showing the town with more detail.  Terry took a telephoto shot but it was a bit blurred. 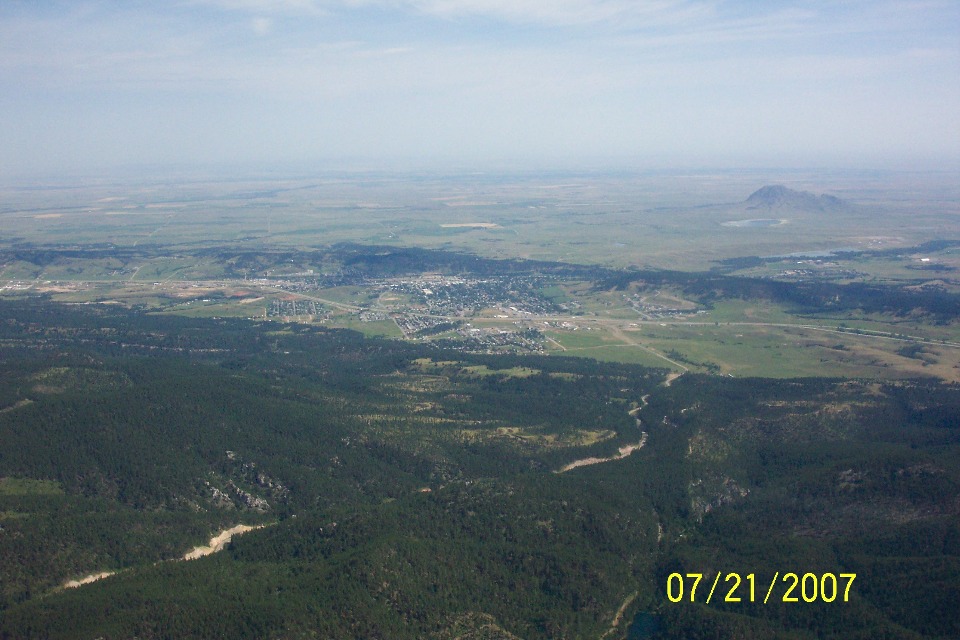 Here is the airport serving Spearfish, South Dakota, conveniently located adjacent to I-90. 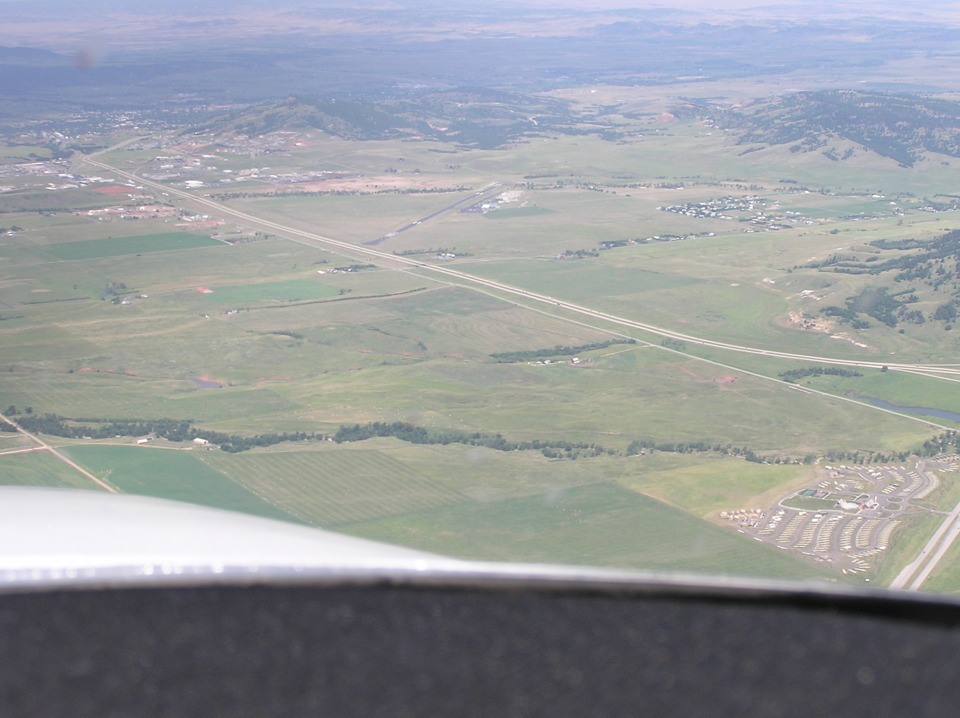 This map segment provides some detail of the Sturgis / Spearfish area.   Sturgis is just off the right side of the map across that county line you see at the edge of the photo.  The wider red transparent line is the GPS ground track of the flight path through this area.

Not long after passing the Sturgis / Spearfish area, the plan was to refuel at Bellefourche, South Dakota.  Only one problem with that idea, the airport was closed!   As they approached in the 182, no one answered the radio calls to UNICOM on 122.8 MHz.  A fly-over of the runway revealed a big YELLOW "X"at both ends of the closed runway.  No gas here today, so on they flew with plenty of reserve fuel in the tanks.

Terry has friends just about everywhere in the USA (and elsewhere).  He circled this ranch about 45 miles north of Sturgis, not too far from US 85.  He has come out here to go hunting with his friend in the past.  The farm house and other buildings are in the upper right quadrant of the photo.  Terry tells me there is an air strip here, but it is not easy to see.  The owner flies a Piper Cub with large tires to fly over his ranch lands, which in this territory are "VAST" if you know what I mean. 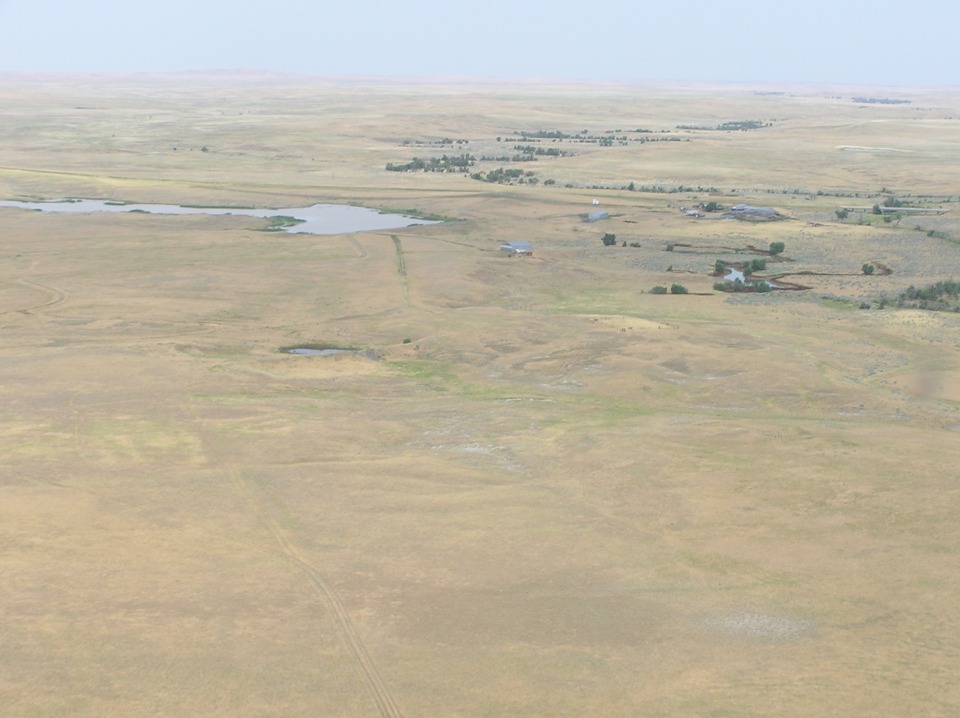 The little country road comes across the wash and by the house, barn, corral, etc.  That building that did not quite get completely in the picture at the bottom left could be a hangar for the Cub. 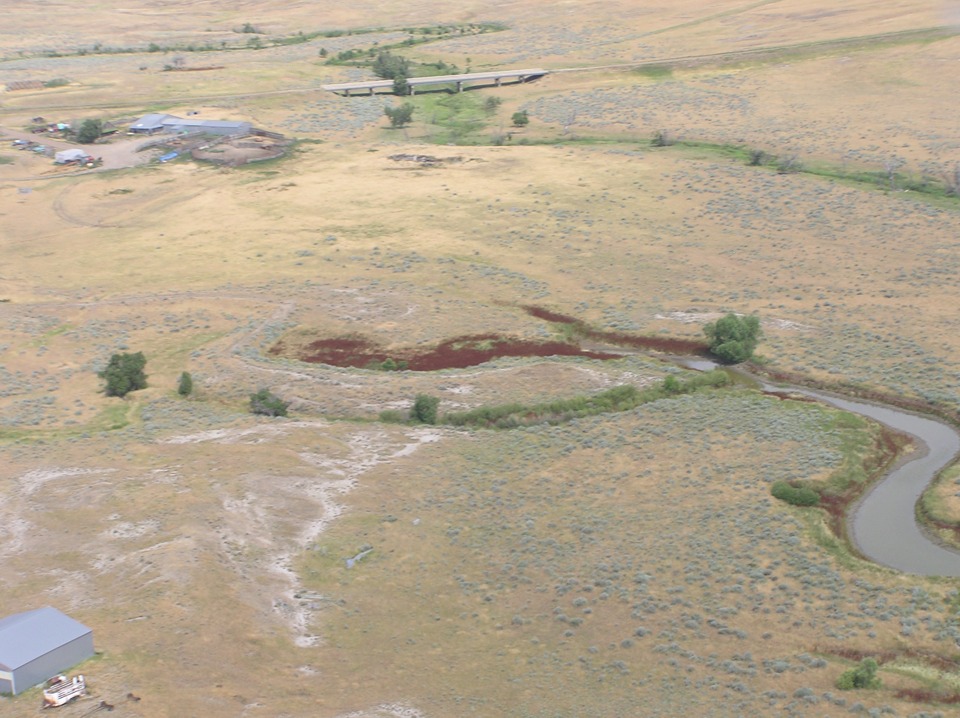 Here is a close-up view of the main buildings.  The home has at its core an old log cabin that dates from the days of the first settlers here.  The house has been expanded and a modern green metal roof protects it.  Two feed lots have big piles of hay in them.  Can you see the "ice house" at the left side of the photo?  Look carefully and you will see all the trappings of rural ranching life meeting up with modern ways of storage, etc. 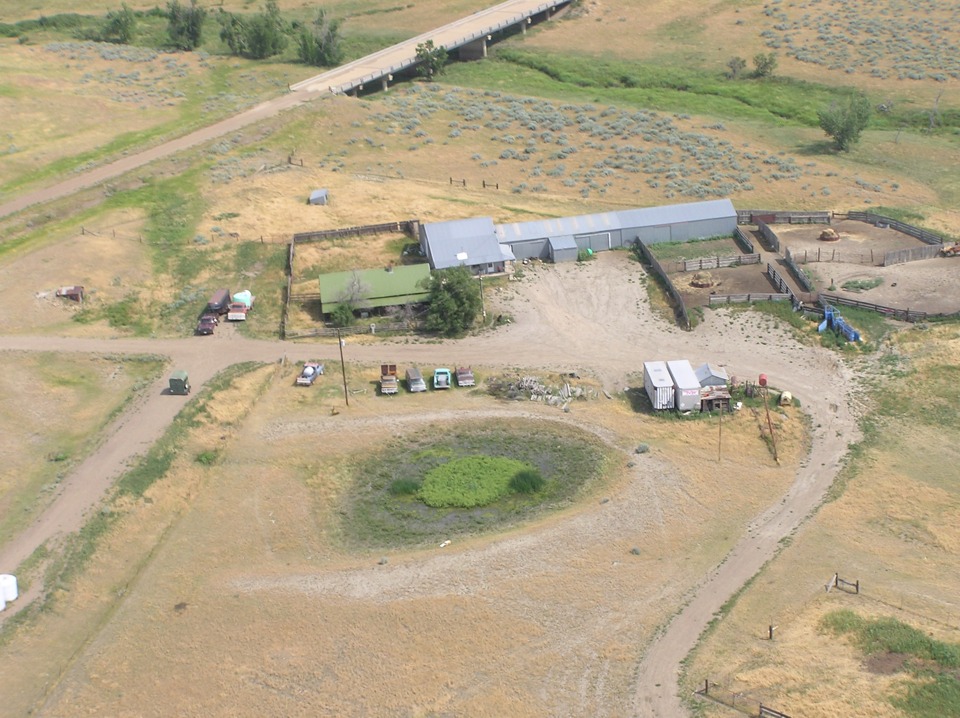 After one circle overhead to get these photos, it was off to Miles City, Montana for a fuel stop about 150 miles from the location seen above.  The route followed the Moreau River in South Dakota and skirted the "Powder River A" military operational area (MOA).  Two noted places along the GPS ground track were Kohones Ranch and Hell's Gulch.  No pictures were taken along that route, indicating to me there was nothing remarkable to see other than more of the Great Plains.  The third picture up from the bottom of this page should give you an idea of the area.