July 21, 2007:  Day TWO continues with the arrival at the next fuel stop in Miles City, Montana.  That is Montana state route 59 coming into the town from the south.  The airplane is on a heading of about 330 degrees true at this point.  Interstate 94 is crossing over route 59 at the right center of this photo.  The Yellowstone River is the natural boundary at the far side of the city before more grasslands stretch off toward the horizon.  The airport is across that river on a bluff where the land is about 200 feet higher than the town on this side of the river. 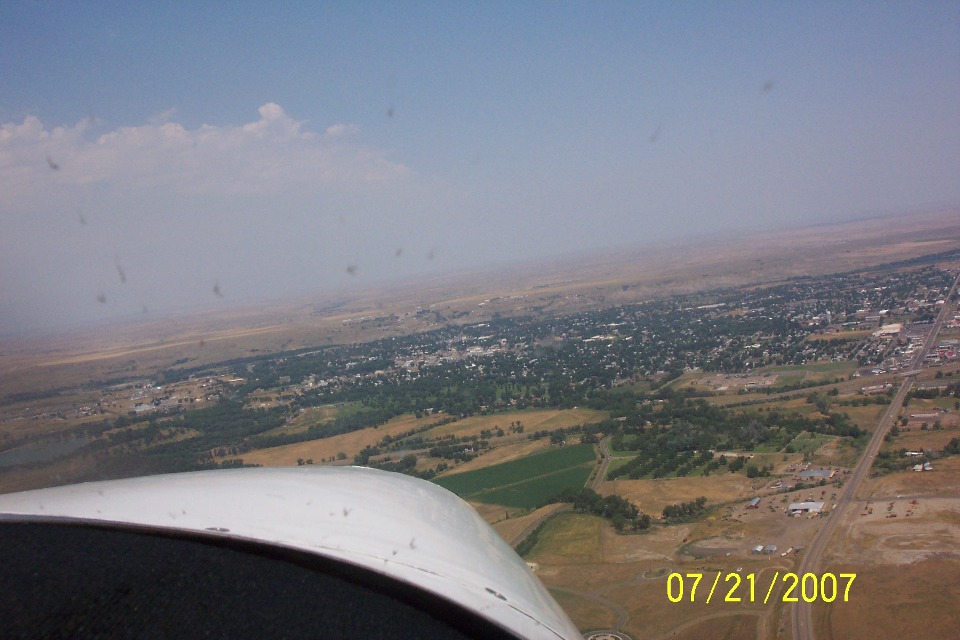 I would say this photo confirms that Wendell was sitting in the right seat for the flight from Mitchell, SD to Miles City, MT.  This shot shows the approach alignment with runway 30.  This photo also shows the rising terrain elevation from the river to the airport area.  I used Google Earth to look at this area and realized that wherever you put the cursor on the map of the Earth, it shows the elevation at that location.  I found that the airport is about 300 feet above the Yellowstone River on the west bank.  Most of the town on the East side is about 35 feet above the river. 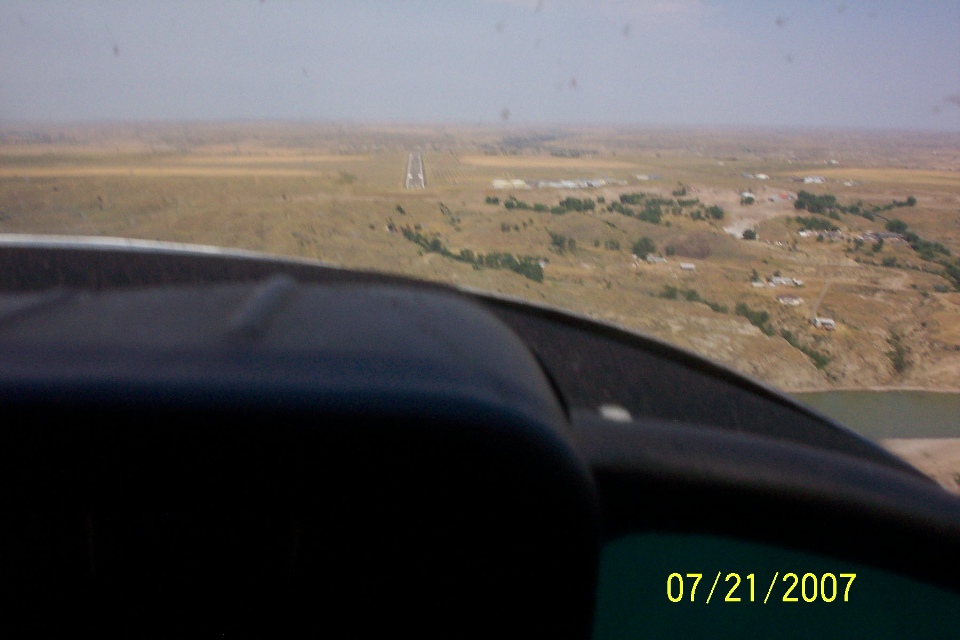 The last GPS data point before shutdown at Miles City shows the time at 12:49 PM Central time.  The next GPS data point has a time stamp of 2:40 PM Central Time.   The flight time from Mitchell, South Dakota to Miles City, Montana was about 4 hours and 5 minutes.  This stop was for lunch and fuel for sure!  Since this place is in the Mountain Time Zone, the local time is now 11:49 AM - just in time for lunch!  Lunch was down in the town across the river via the courtesy car.  This is Terry's ramp picture per my request to document the various places they stop along the route. 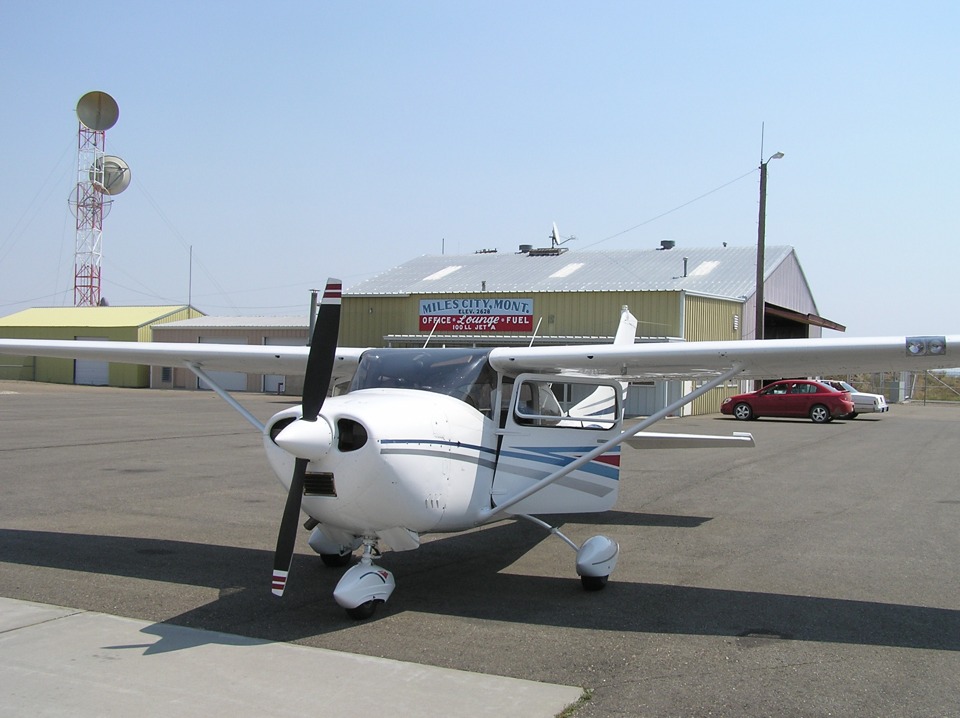 When Terry noticed the lady running this place seemed to be doing ALL the work, he asked how she got in the FBO business.  Terry was the manager of the FBO at Chattanooga (KCHA), so he knows the business.  Her reply was something like this:   "I had this boy friend with a Piper Cub.  I sure do miss that Cub!"   I wish I could have been there to meet this lady.  Who knows, maybe I will drop into Miles City on my way to the Pacific Northwest in my RV-9A.

The GPS did not lock up until after takeoff.  I drew in a green track to indicate the probable route of departure, also from runway 30.   This mapping program connects the dots from the GPS data points.  The red line is straight from the last known parking position on the ramp at arrival and shutdown of the GPS.  The "jog" in the RED line is where the GPS got its first positional fix, then corrected its location as it received more GPS satellite signals to home in on its actual location.

After lunch the flight to Great Falls, Montana took about two hours and 10 minutes.  I say that since the GPS did not get any data points until slightly after takeoff from Miles City.  I "flew" their route by tracking the GPS data points in Google Earth.  There is not much to see for most of the way to Great Falls.   The area around Lewiston, Montana had some low mountains or hills if you like, but otherwise, the terrain was pretty boring.  That explains why neither Terry or Wendell took any photos until the arrival at Great Falls.

This is Terry's photo looking back at the city after crossing the Missouri River.  Yes it starts way up here in Montana just over 100 miles south of Great Falls near a place called Three Forks, Montana.  The Jefferson, Madison, and Gallatin Rivers all converge to create the Missouri River.  The headwaters of the Madison and Gallatin Rivers are both within the boundaries of Yellowstone National Park in northwestern Wyoming.  Looking at those bridges, it is obvious that large river boats like the ones on the lower Missouri and Mississippi Rivers don't come this far upstream. 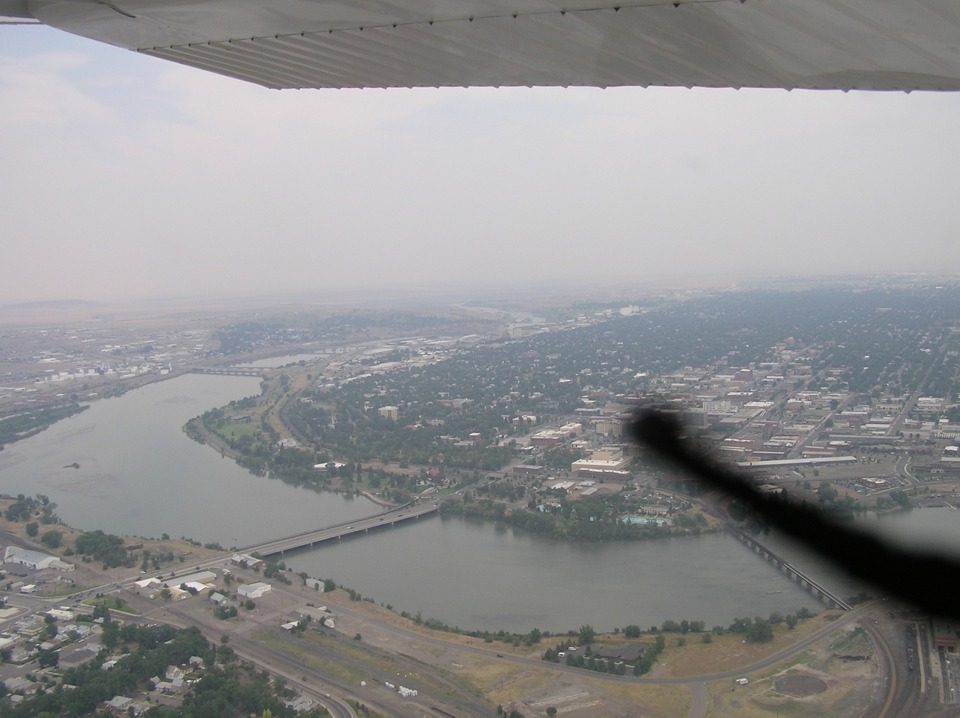 The photo above is looking aft after flying the downwind leg to runway 21 and beginning the turn to base leg for the landing at the Great Falls International Airport (KGTF).  Terry told me the camera strap is that black shape near the lens.

Here is the approach to runway 21 at the airport.  Notice the FedEx 727 parked on the ramp to the right.  General aviation is on the left.  This runway is 10,502 feet long and can land airplanes up to the size of Boeing 747's.  To put things in perspective, the shuttle landing strip in Florida is 15,000 feet long, but then the space shuttle has no flaps or leading edge slats to slow it down on approach. 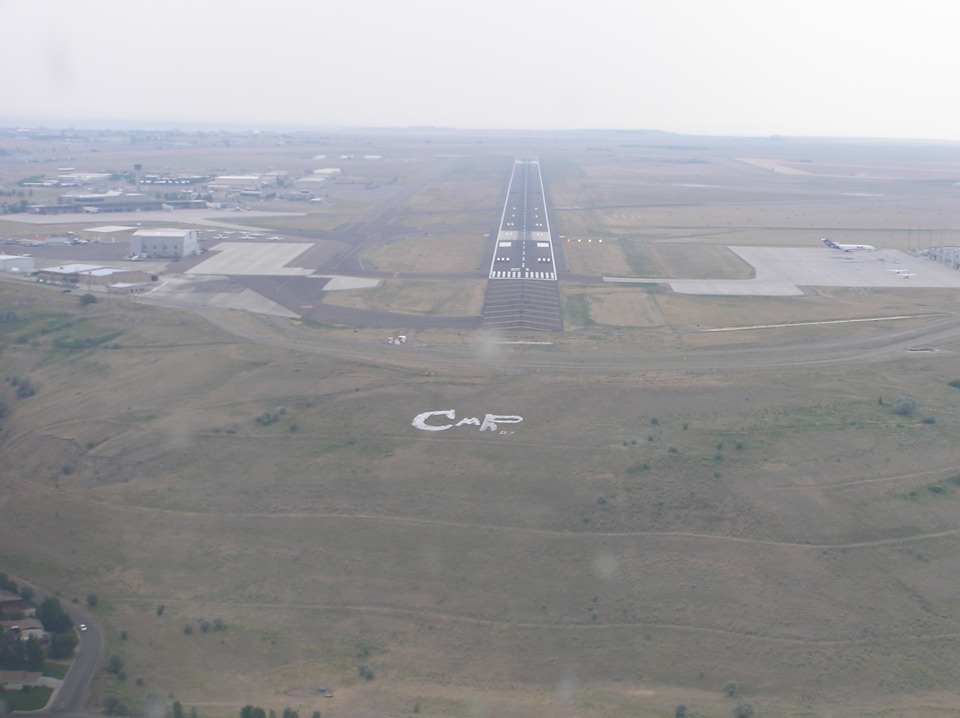 And by the time the 182 was parked on the ramp and this photo was taken, the time was 3:03 PM here in the Mountain Time Zone.  This view is looking south from General Aviation parking toward the commercial air terminal building and the airport control tower. 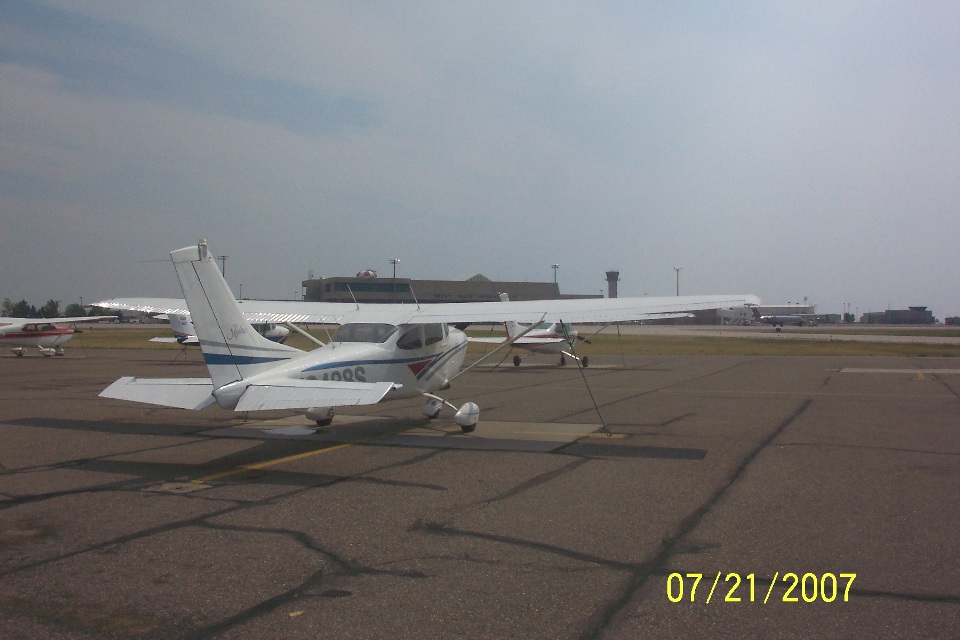 When you turn around and look north, you see the Holman Aviation FBO office.  This is where the journey ends for today after about 6.3 hours of flying across South Dakota and much of Montana.  The direct flight path from Mitchell, South Dakota to Great Falls, Montana is approximately 691 statute miles.  The flight path of today's sightseeing flight was about 825 miles according to the GPS ground track data base.  It was more fun than just taking off, setting the autopilot and droning along above the northern plains of the USA. 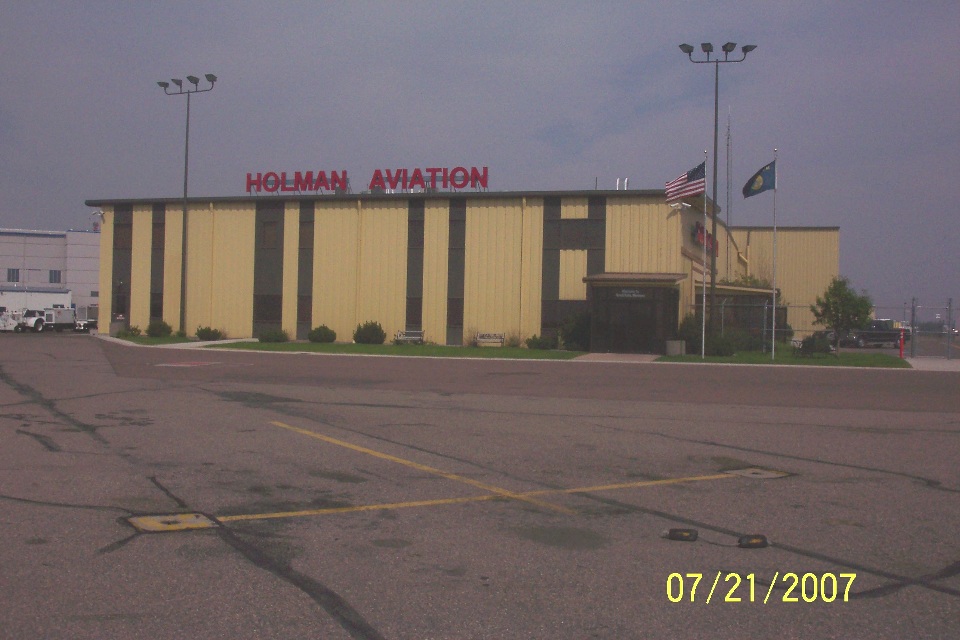 Just so you know, I am posting this page on the evening of August 9, 2007.   I can see this Alaska project is going to take me a lot of time to do it justice.   I interviewed Wendell and talked with Terry on Saturday, August 11th to get the other stories behind the basics I have already posted.