July 23, 2007:  Day 4 continues with this photo of Fort Saint John, BC taken by Wendell about 10 miles from the center of town.   The town is located on the bluff above the Peace River. 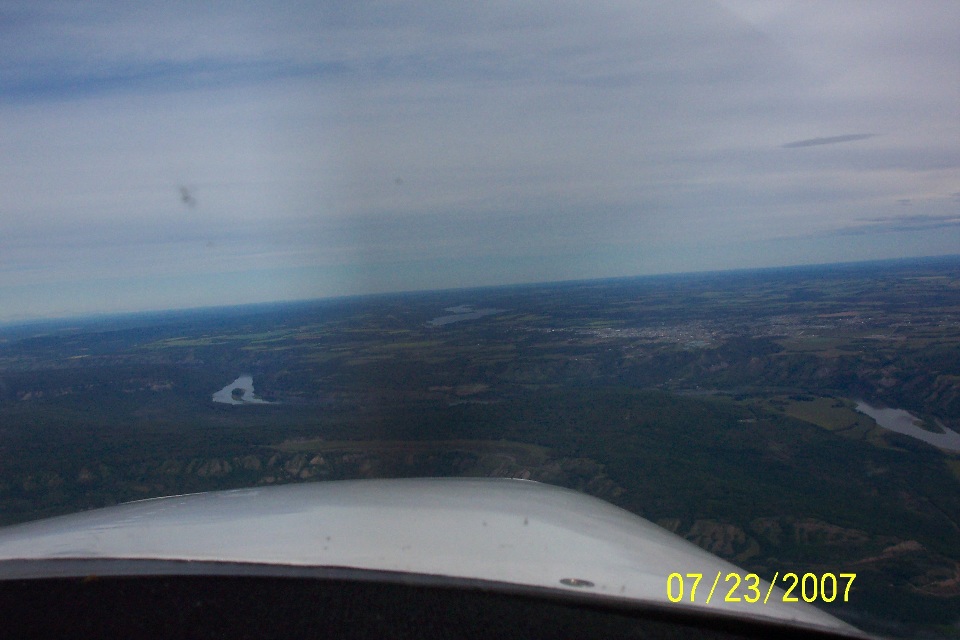 Terry took this telephoto picture closer to the town allowing a view of the river which has an elevation of about 1,350 feet MSL here, while the elevation on the bluff is around 2,150 feet.  The official airport elevation is 2,280 feet MSL. 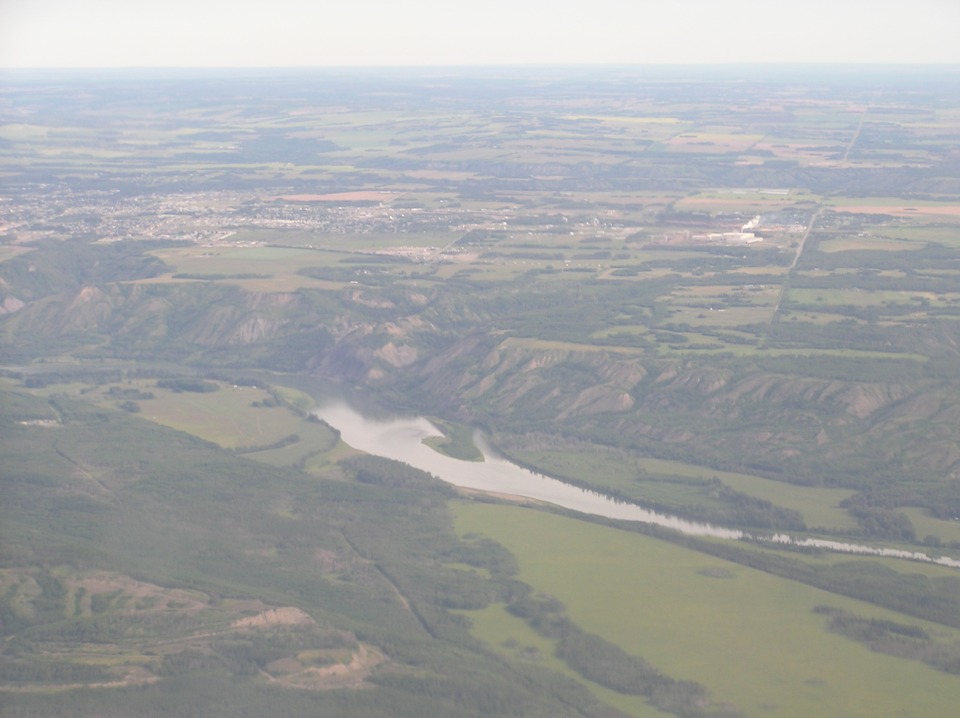 Here is Terry's view of the river looking west as they pass overhead. 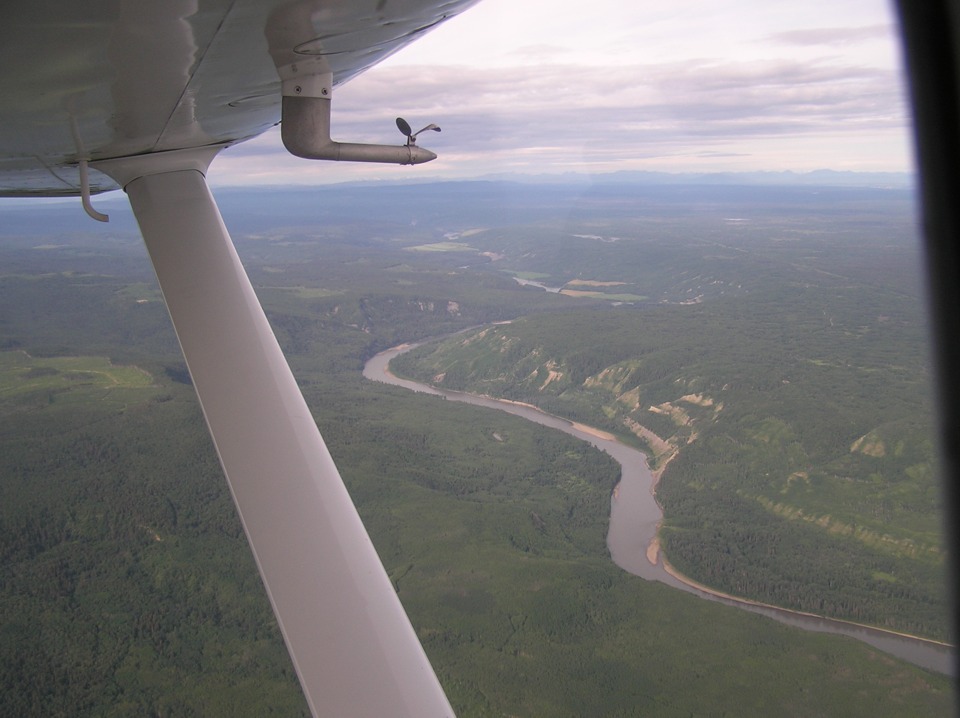 April 27, 2015 UPDATE:  Here is a screen capture I made as I was "flying by this river" in Google Earth.  This is found via GPS track number 08 after 23 minutes 13 seconds of "flying time" on the computer.   I paused the flight and looked around until this screen view below matched the real world landscape photo from Terry's photo above taken on July 23, 2007.  I wanted to show how this process works comparing Google Earth views to real photos.  You can see any part of their 2007 journey using Google Earth.  The view below shows how Google selected aerial photos from different days to get cloud-free images to see most of the planet.  In this case, the contrast and lighting in the images were different. 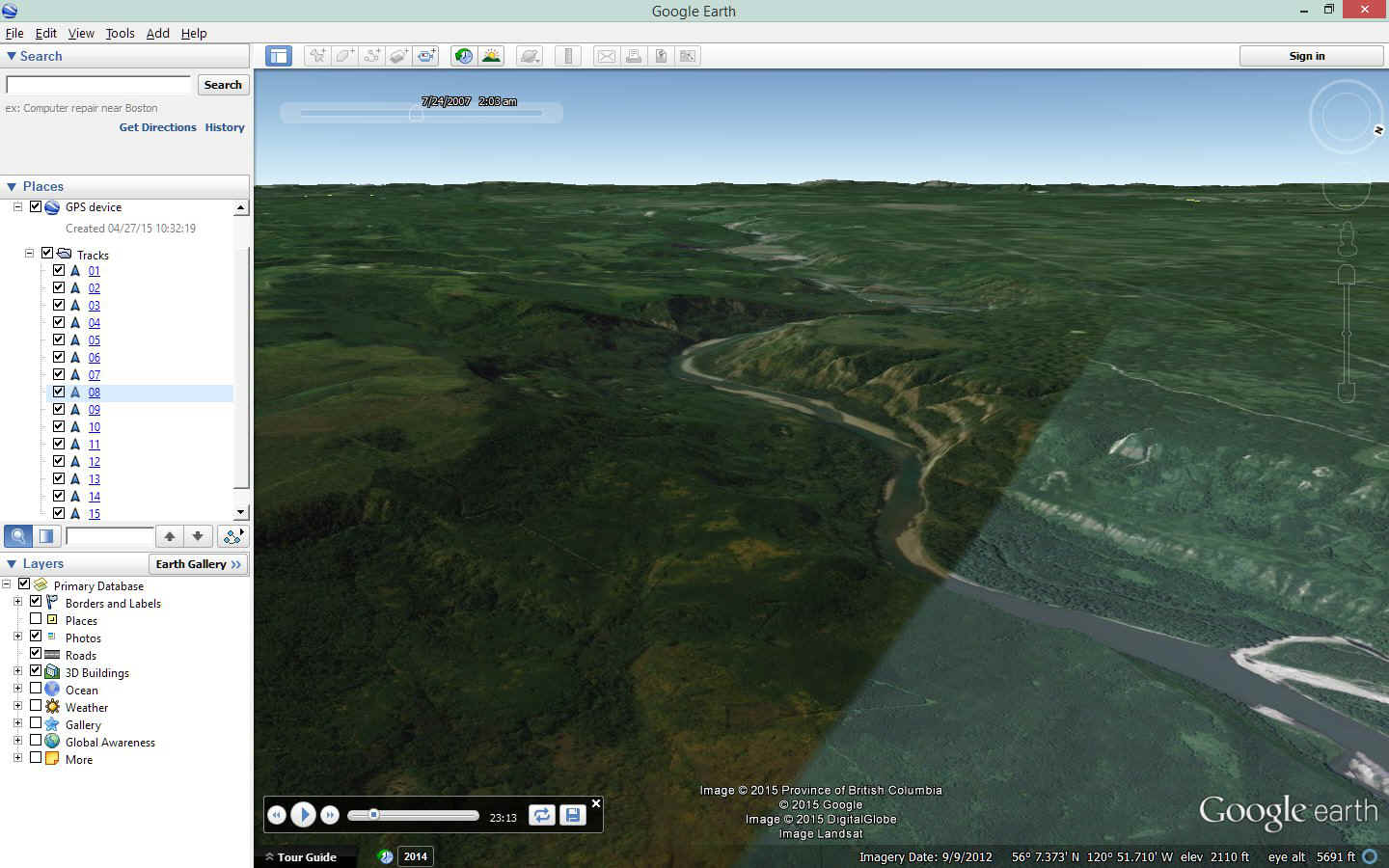 Terry's next photo is about 40 miles northwest of Fort Saint John showing the Alaska Highway winding off into the distance.  Although it does not show in this photo, this is an area with lots of oil wells.

Now this is one lonely road out here in the forests.  There are mountains in the distance. 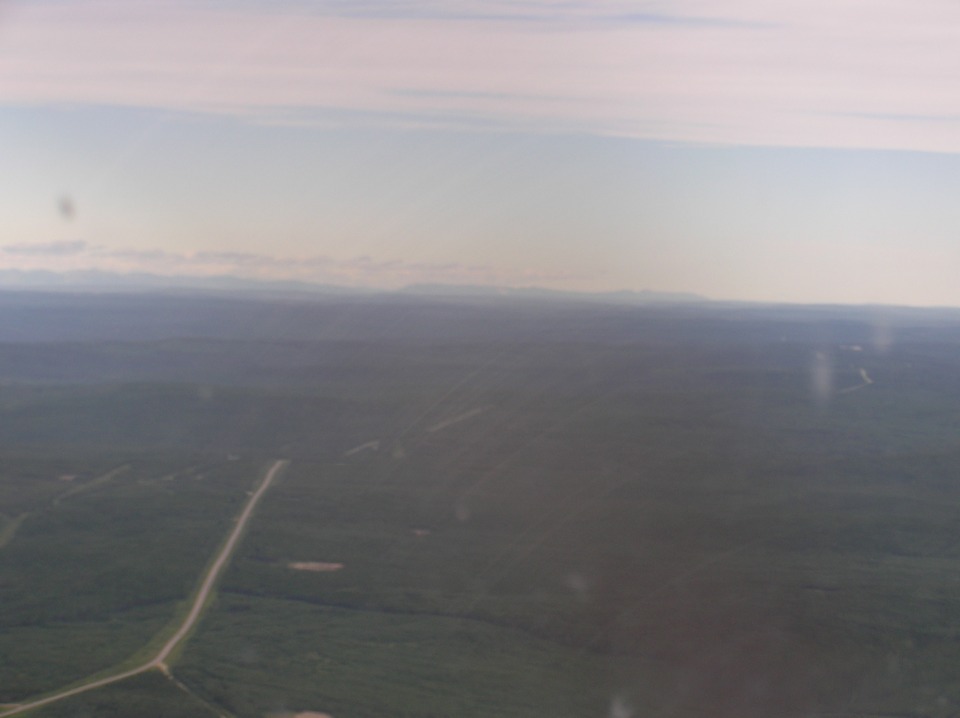 Wendell took this photo about 75 miles NW of Fort Saint John.  Do you think these photos look alike?  The thing to notice in this one is the mountains and passes up ahead. 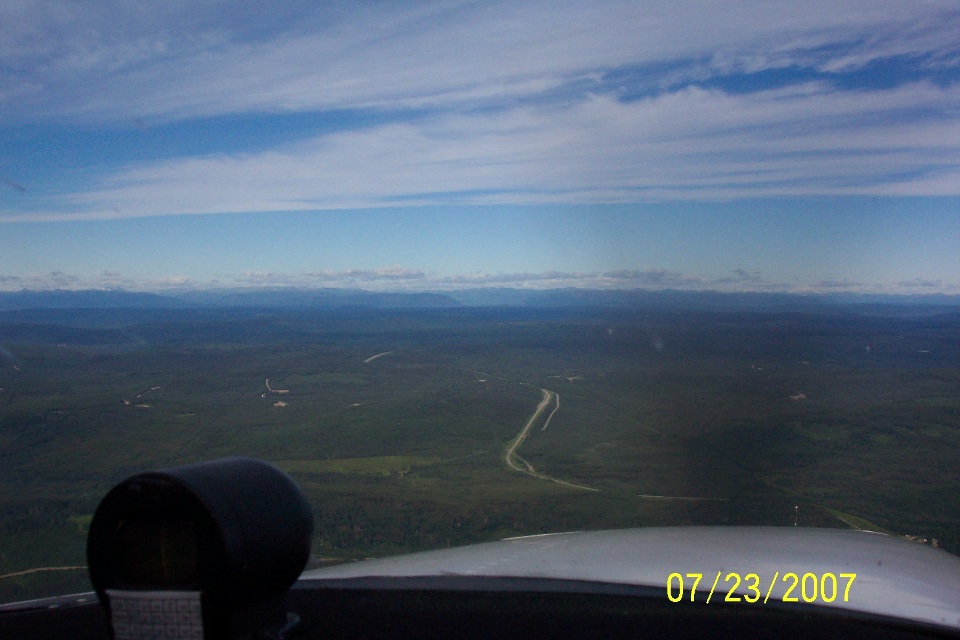 After flying across an area without any towns or villages for a while, this little "oasis" pops up around a bend in the road. 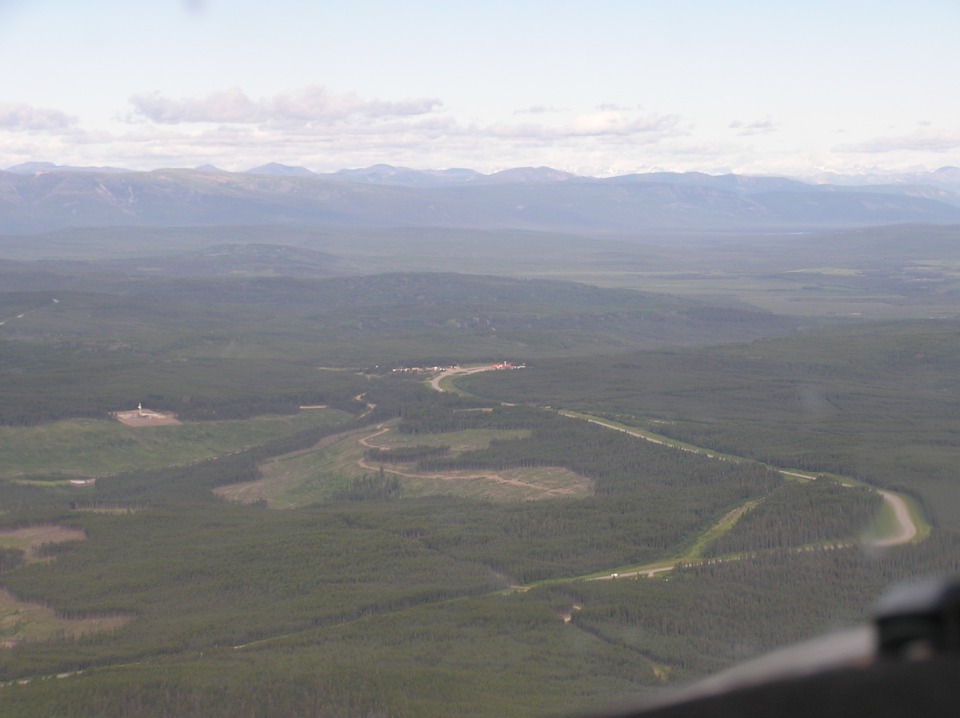 This is only the second named settlement after leaving the Fort Saint John area.   The place is called Pink Mountain.  It appears on the base map in my Garmin GPS 296 on route 97.  This place is at mile 143 on the Alaska Highway.  You can read more about it via this WEB LINK.  If you want to learn more about the Alaska Highway, a Google Search will bring up web sites like this one:  http://www.karo-ent.com/dawson.htm. 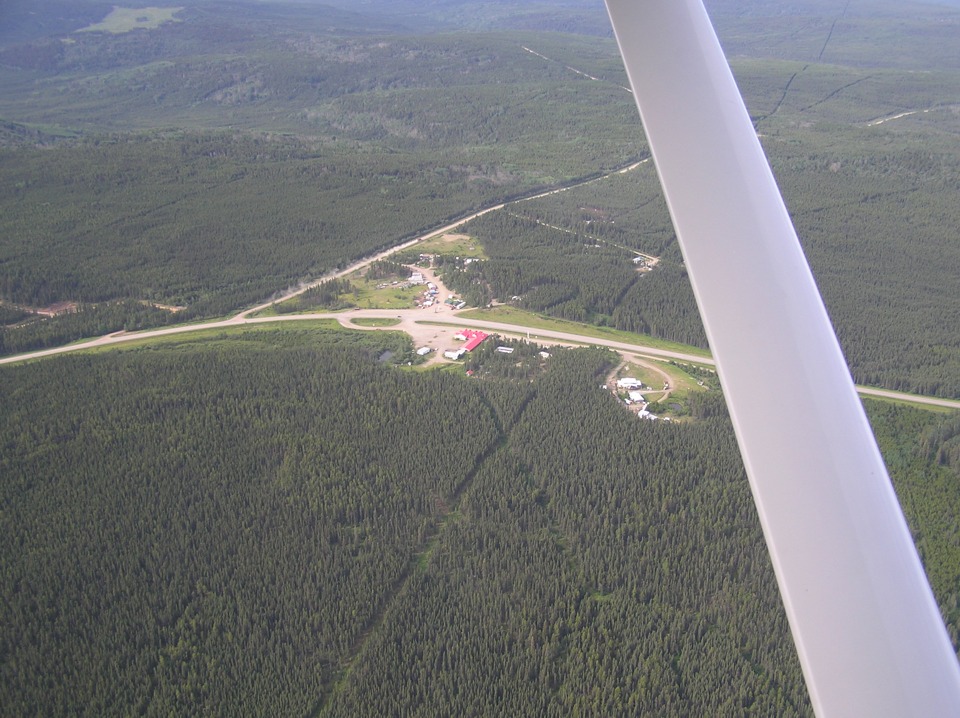 April 27, 2015 ADDITION: Here is the cropped May 16, 2014 Google Earth view of this area.  I magnified the view to simulate Terry's telephoto photo above.  There is a difference in the grass by the highway from the July 23, 1007 photo above.  Use the bottom browser slider bar to see the lower right corner of this image to see the ground elevation compared the "eye altitude" representing the altitude of the airplane as the guys flew past here that day in 2007.   When you FLY Google Earth, look for those little photo points like the one seen in the image below in the highway near the RED top building.  Click on those photo points and you can see all kinds of things along the way.  I found photos of grizzly bears, a black mountain bear, a cougar, and some wild flowers in bloom as I was "flying" from Dawson Creek to Fort Nelson today doing this research for the web site.  Clicking on that image point below while running Google Earth will show the red roof building on a snowy day. 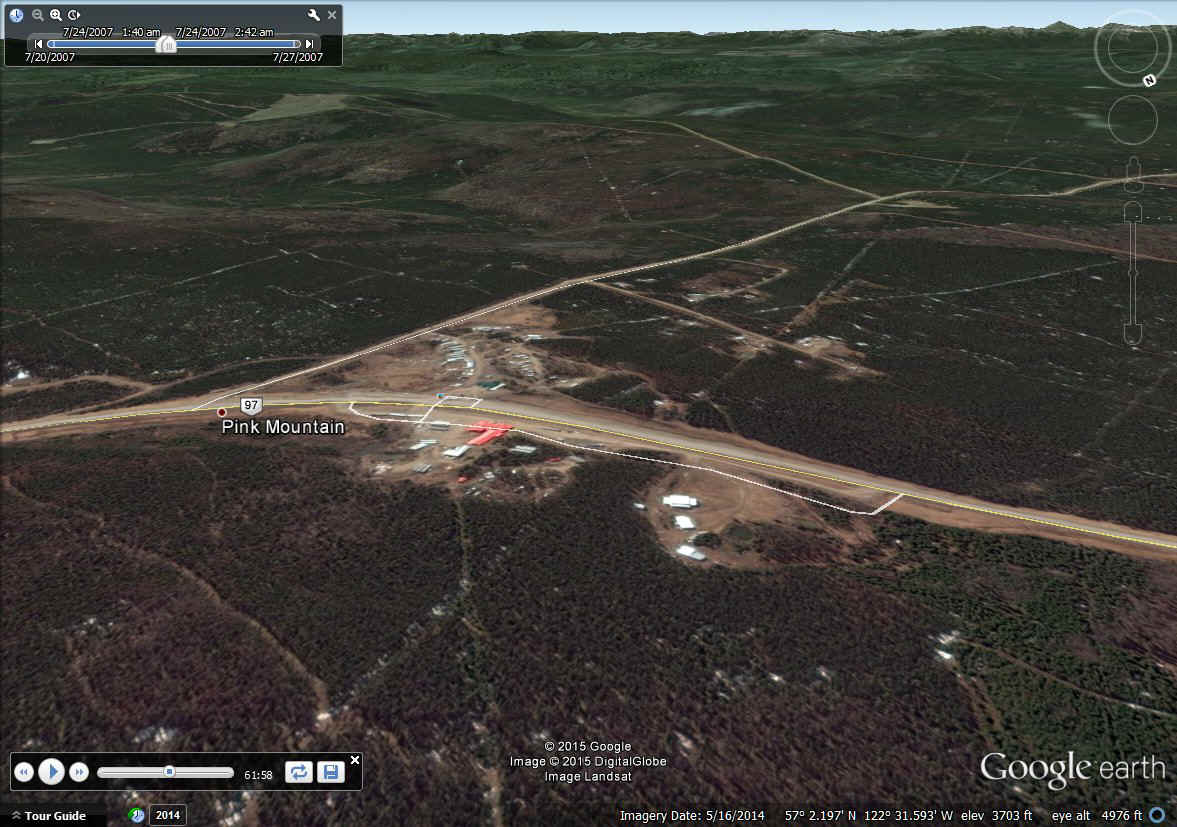 It is these exposed cliffs from land slides that gave this area its name of Pink Mountain. 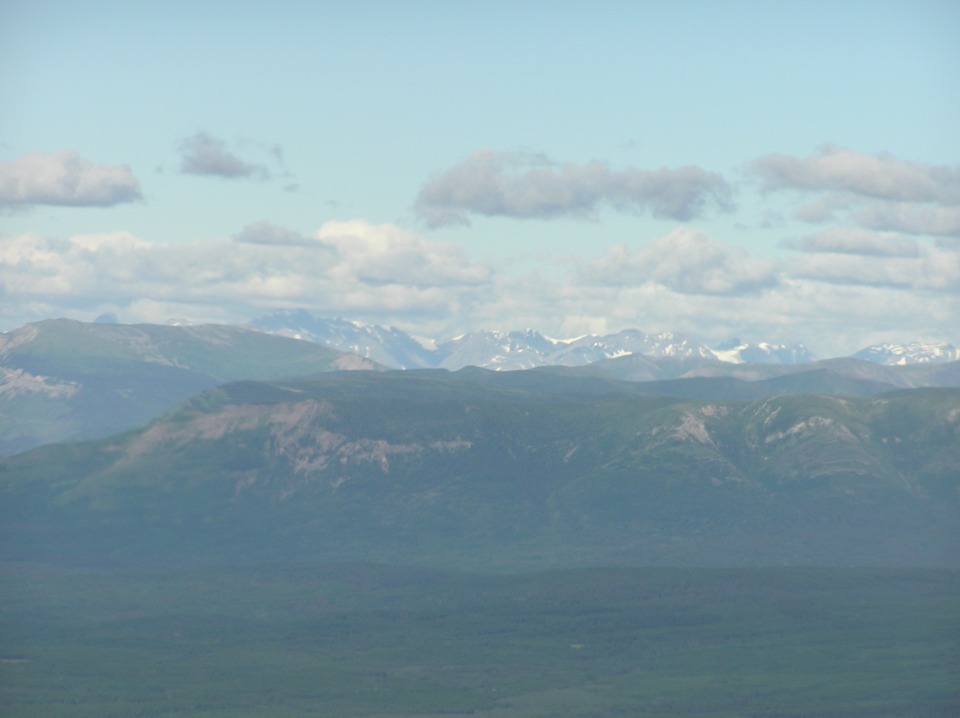