July 23, 2007:  Day 4 continues with the stop at the Fort Nelson Airport.  This view is looking west toward the control tower.   They are now in the Pacific Time Zone, which makes the arrival time 10:08 AM Pacific Time for a route segment of 266 miles in two hours.  This is Terry's official flight instructor pose. 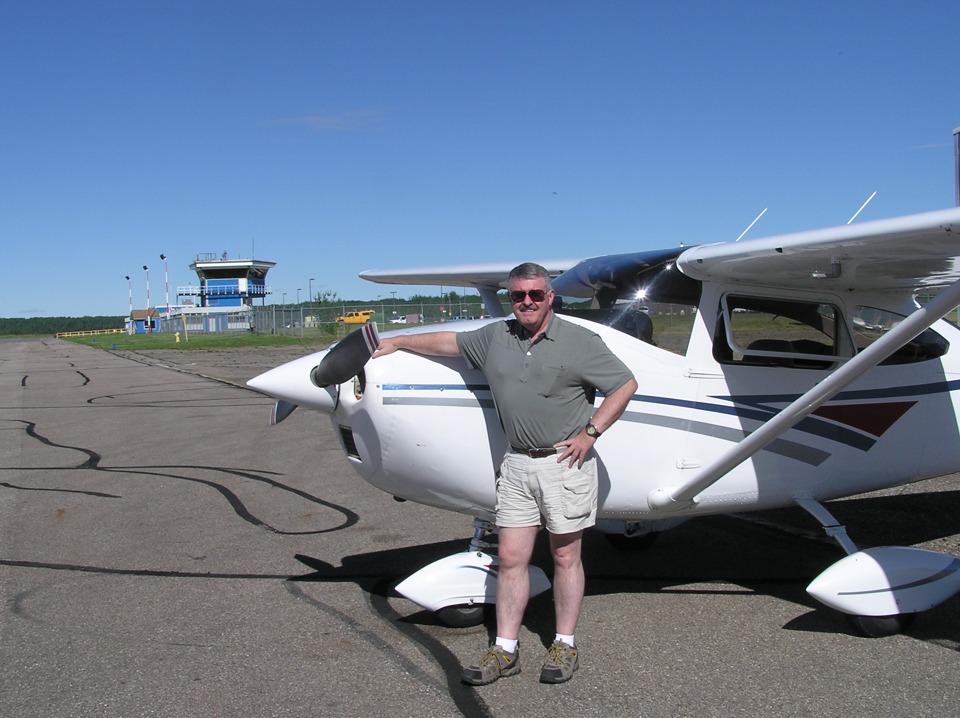 Everyone gets a picture taken here.  The weather looks great here!   Sun glasses required for these photos.  Wendell has "Hollywood" shades. 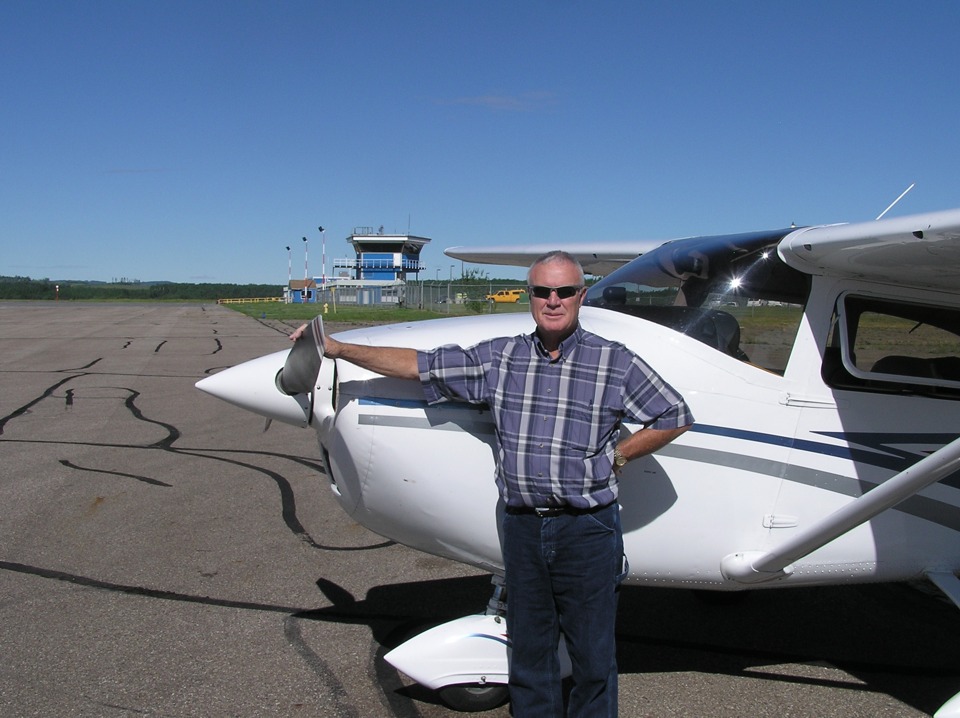 After 45 minutes on the ground, it was time to get cranking and head west from Fort Nelson.  Terry gets this picture of the Fort Nelson VOR which is located 15 miles west of the airport. 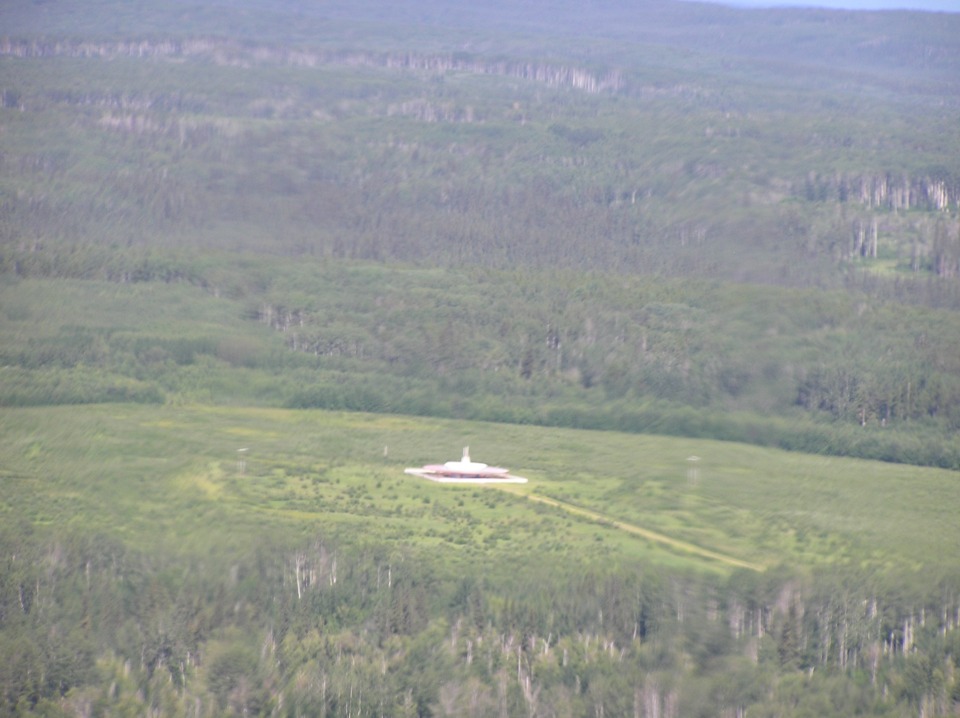 At about 58 miles from the airport, the highway starts a descent into a river valley and begins to follow it westward.  Terry smudged his lens accidentally and did not discover it for a while.  (It must be those snacks on the fingers.)  This view is looking northwest at what appears to be Steamboat Mountain. 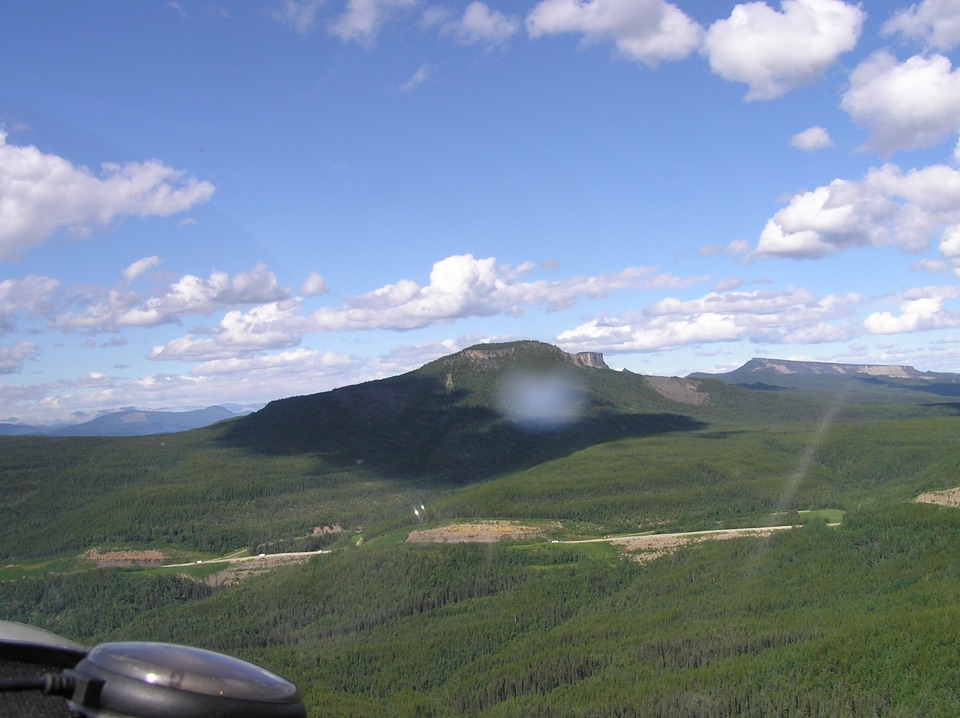 Terry took this photo right after the one above showing the view ahead where the Alaska Highway makes a turn at the end of the downslope seen in the photo above.   The smudge is now in the forest left of the road. 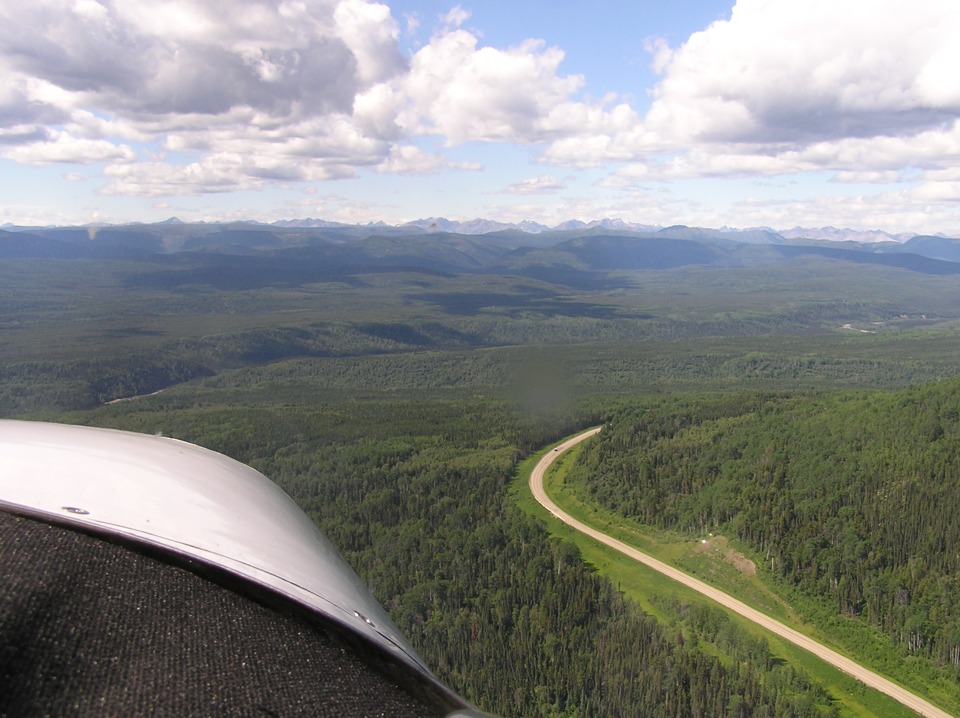 Since Terry is in the right seat for this leg, he is really taking a lot of pictures along this stretch of the highway.  He spotted this moose and her calf crossing this river off the right side of the airplane 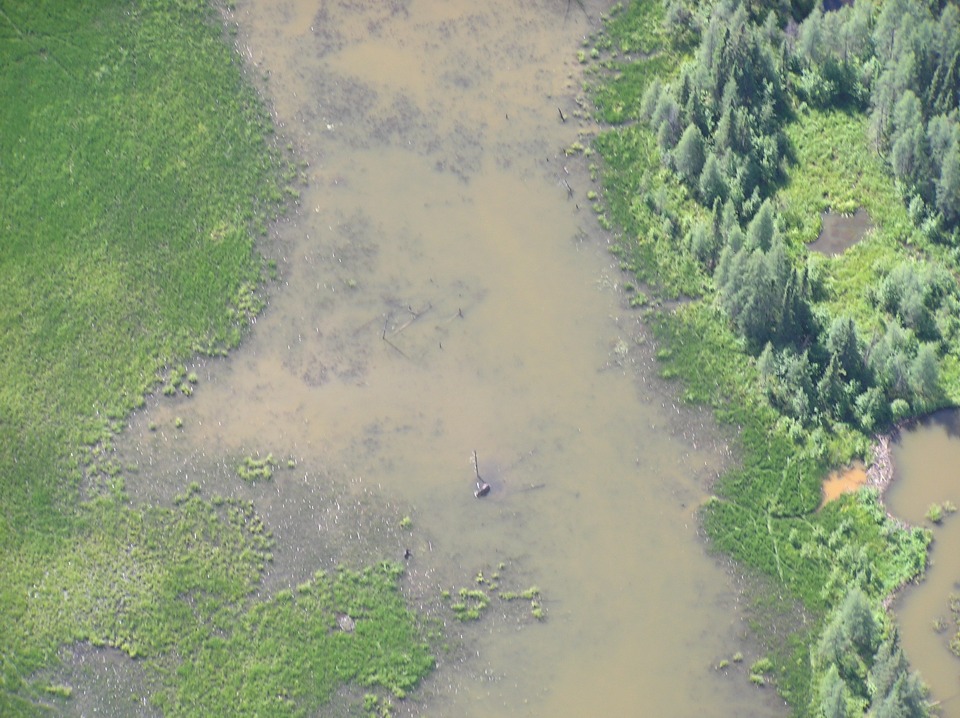 The road ahead is getting deeper into the mountains, always following a river route through the passes.  Terry pushed the zoom lens to capture the distant barren mountain peaks. 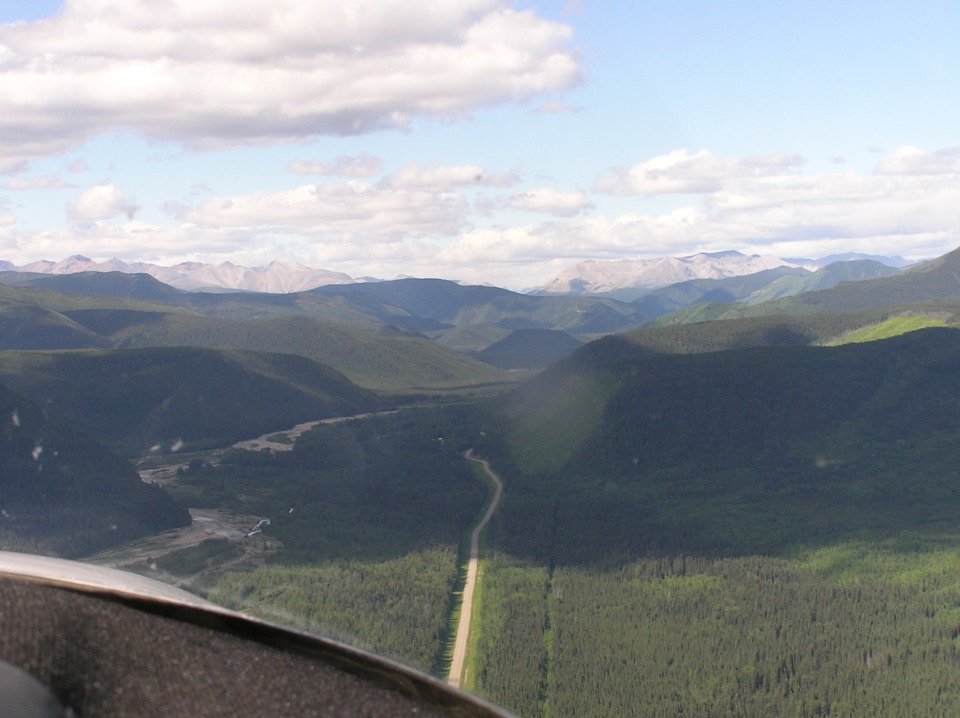 This area has almost no roads off the main highway to either side.  The wildlife are plentiful, while humans are few indeed. 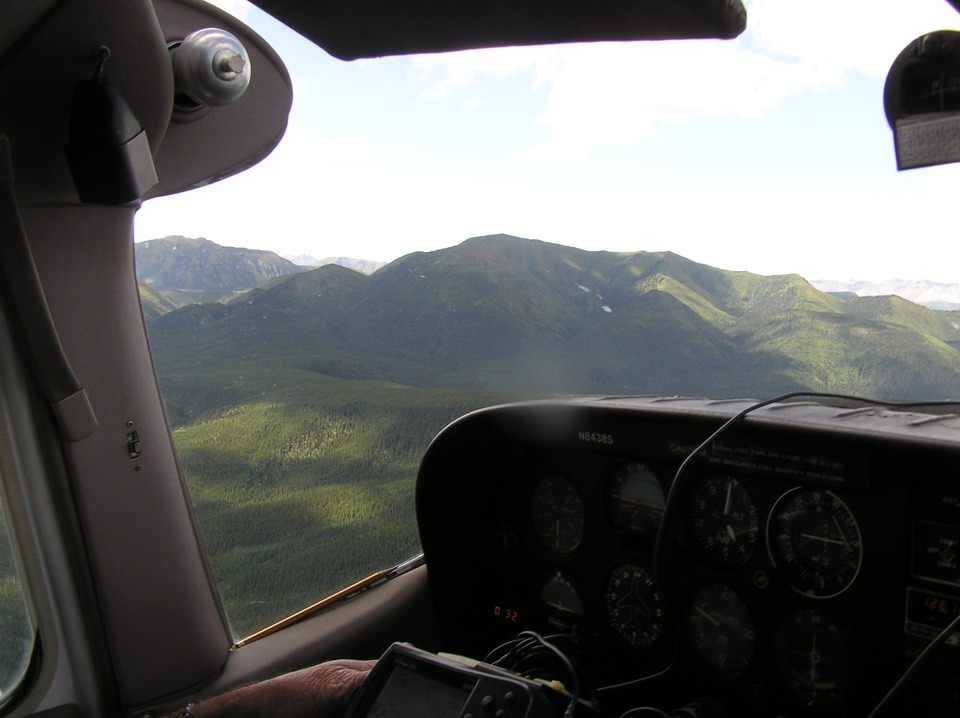 Here is a wide-angle shot to put those mountain peaks in the distance into perspective from where they are flying now. 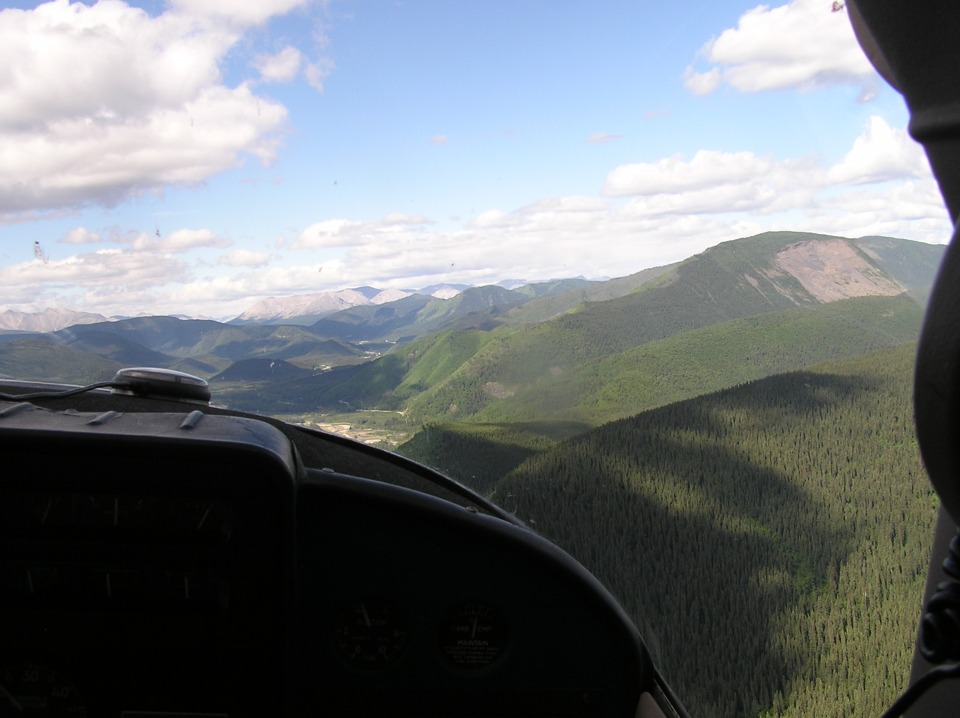