July 23, 2007:  Day 4 continues as it appears that Terry is taking photos with both cameras.  The Alaska Highway has started a turn toward the west and a bit south as well to follow the Muskwa River.  Take notice of the shadows from the clouds overhead. 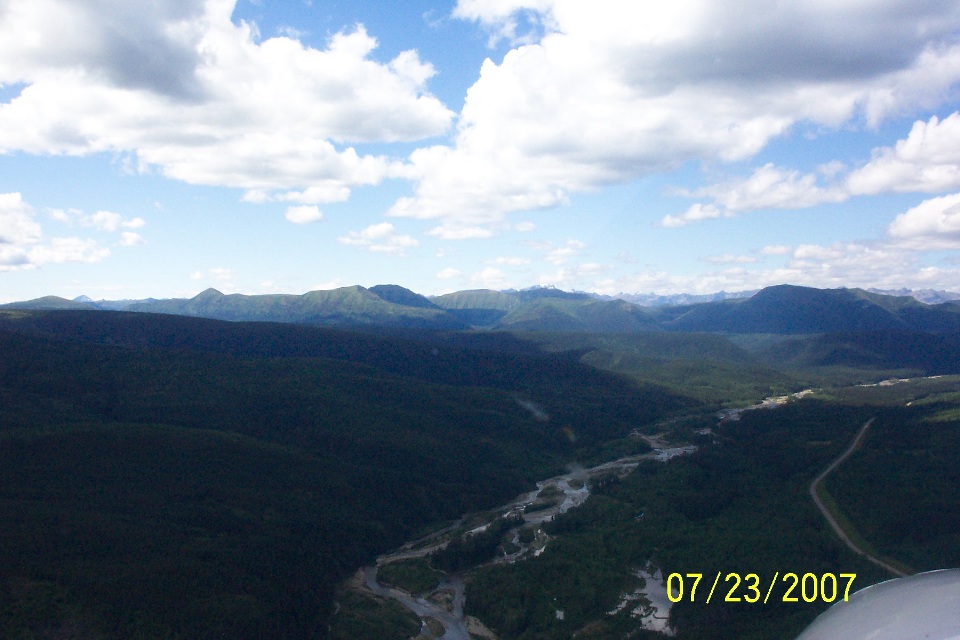 Just a few minutes later, this is the scenery that greets them with a bit less of the landscape in shadows.  They have also climbed 1,000 feet to clear the rising terrain. 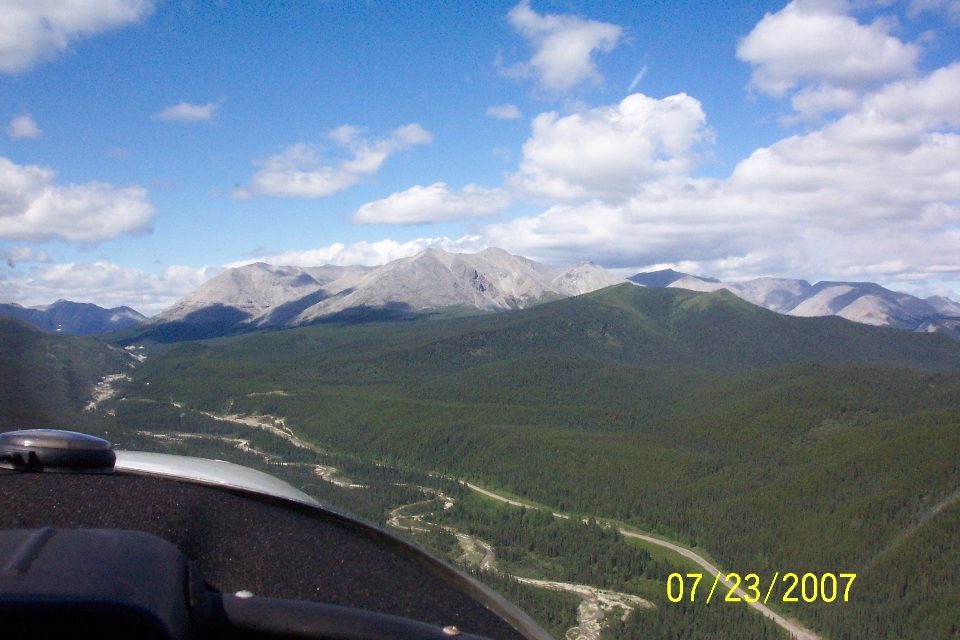 He quickly turned the camera to the right and got this picture showing the trackless forest on either side of the river and the highway.  That little bit of the highway below is the same curve that is just above the 07 in the date stamp in the photo above this one.  There is a faint reflection off the window at the center of the photo. 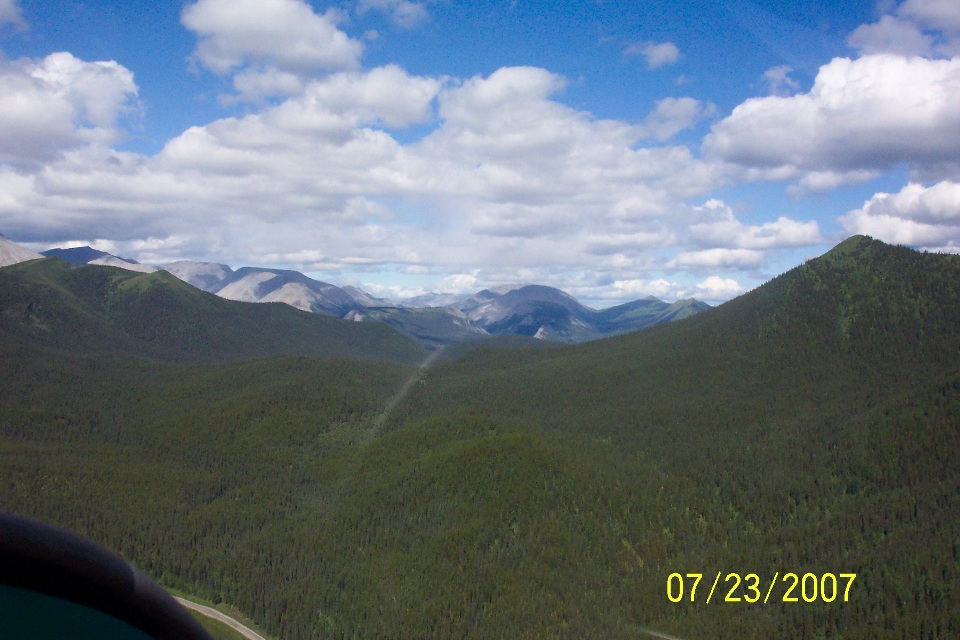 Terry got this good picture of the truss bridge crossing the river.  This location is about 66 miles from the Fort Nelson Airport. 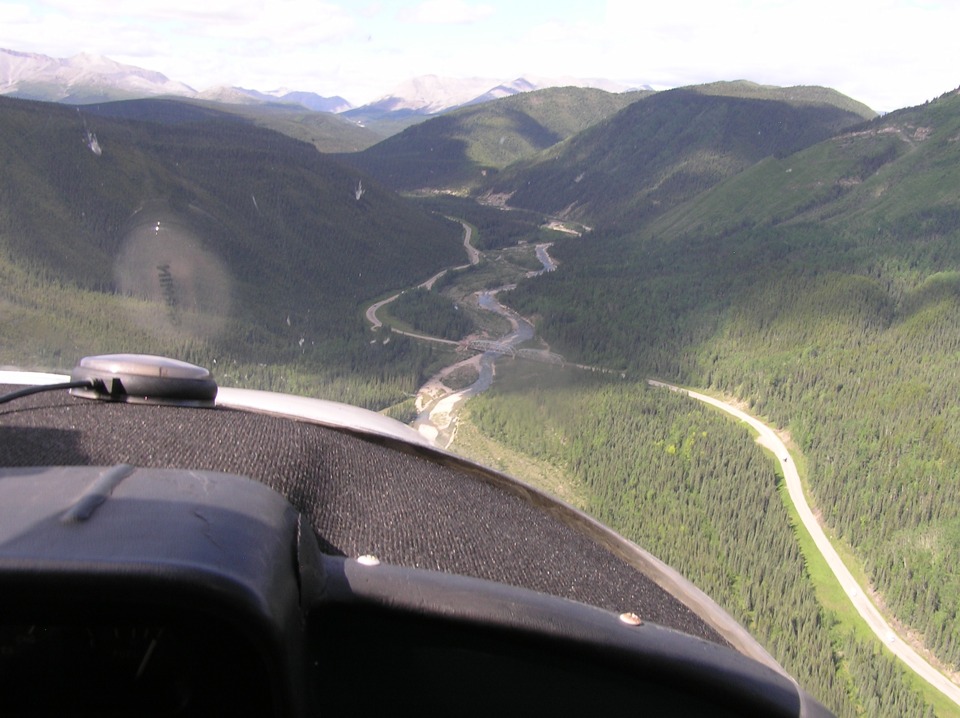 Wendell makes a little turn to give Terry a chance for a close-up shot of the bridge.  One vehicle is about to cross the bridge going East, while another is parked on the side of the road to get a picture of the bridge and the Muskwa River.  A third vehicle is further down the road before it goes out of sight around the curve ahead.   It is too bad there was a reflection of the instrument panel off the side window. 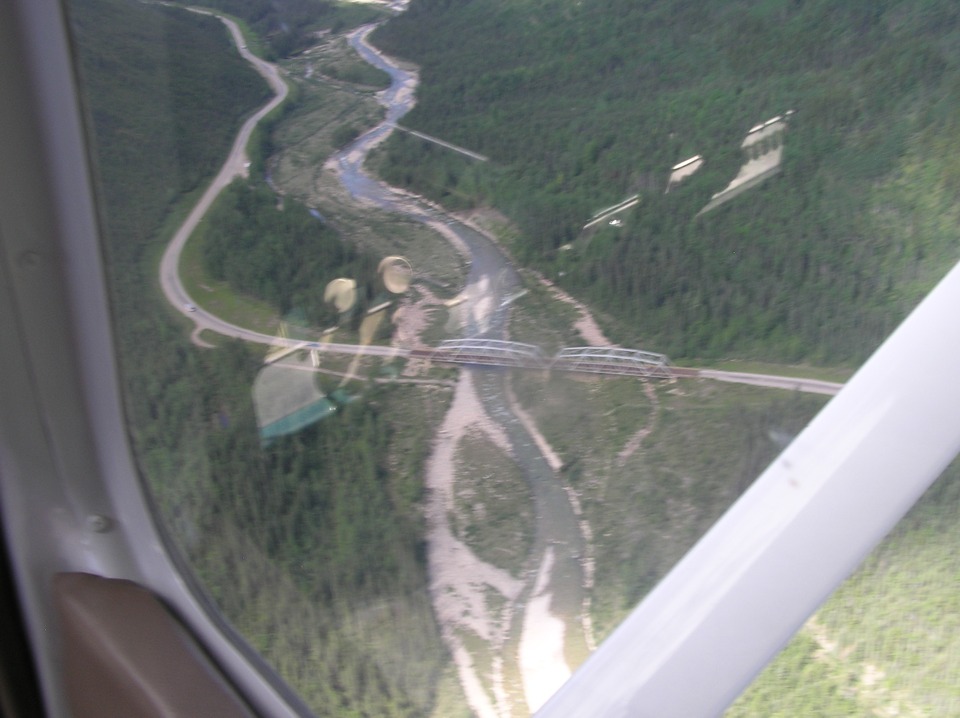 Between these barren mountains is a body of water listed as Summit Lake.   The water from it drains eastward down this valley toward Fort Nelson. 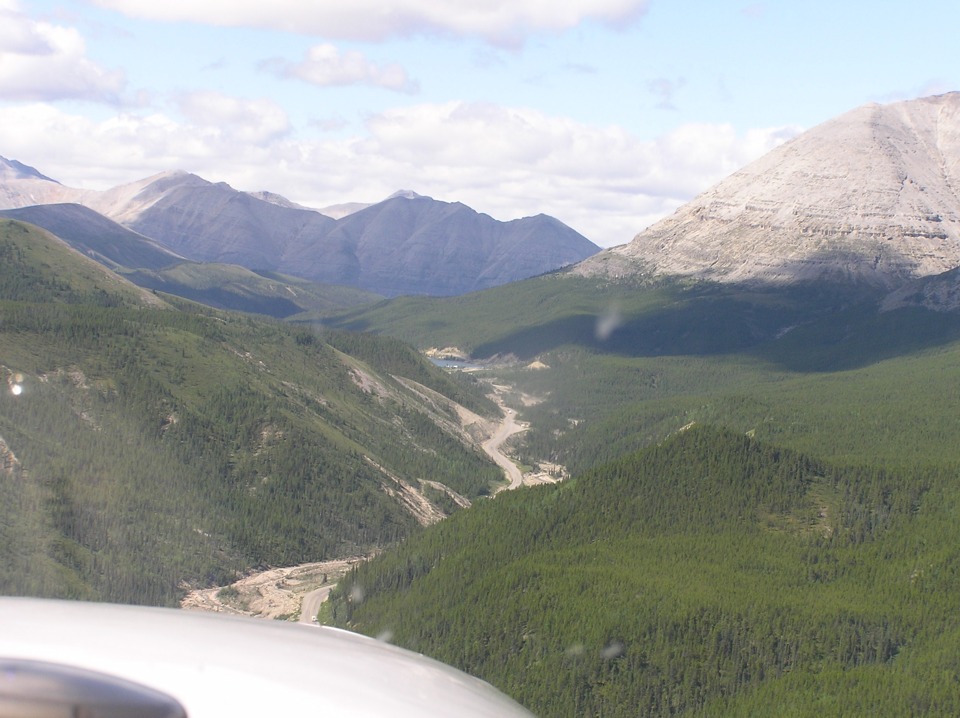 Not far past Summit Lake the Alaska Highway meets up with the Toad River to continue its course toward the northwest.  This is the river coming up from the south as the highway comes in from the EAST a few miles past Summit Lake, British Columbia.   I just looked up Summit Lake on Google and came up with a link from this guy who drove the Alaska Highway.  You may want to file this one away for later if you want to know more about this area.  http://www.worldwidewandering.org/travel/trips/webmaster/AL1997/galleryaugust.html   The pictures were obviously taken in 1997, but should not be out of date since very little changes in this area short of an earthquake occurring. 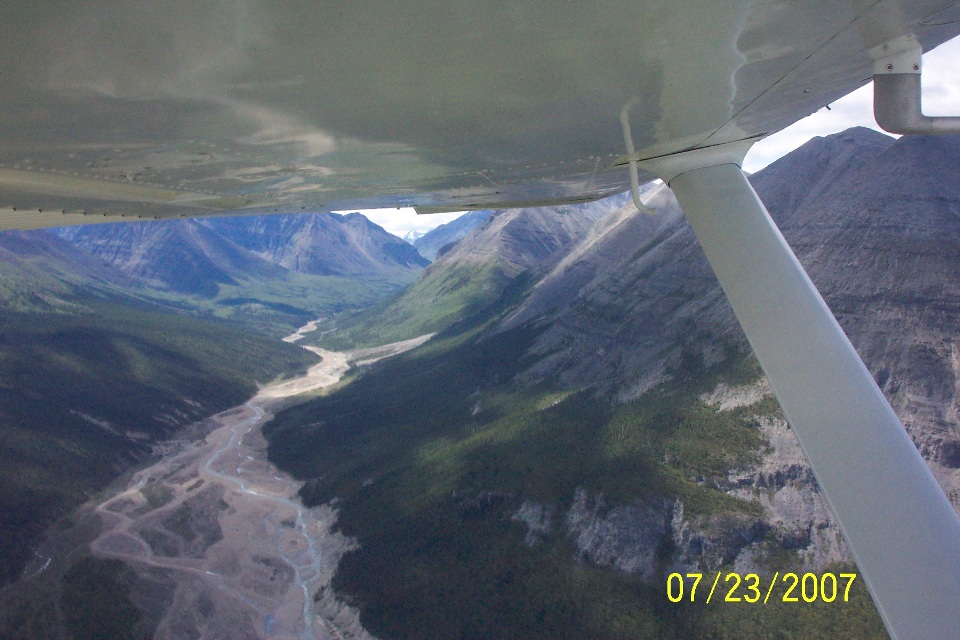 This is the terrain on the left side of the river just past the photo taken above.  That mountain peak is about five miles away from the GPS ground track as they follow the river and the Alaska Highway through this area.  This photo was taken less than one minute after the one above.  Here is another web link about the Alaska Highway you may find informative:   http://www.britishcolumbia.com/regions/towns/?townID=3953 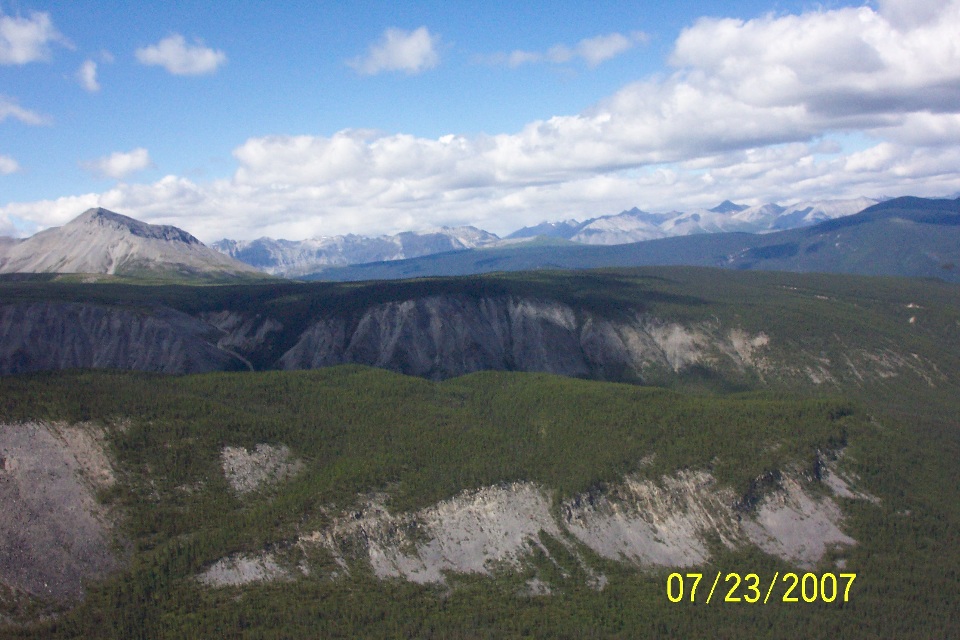 Terry swapped cameras and took this shot after the two from Wendell's camera above.  This view is just to the right of the view in the photo directly above this one, but looking in the direction of flight.  The wide-angle format gives the real view forward. 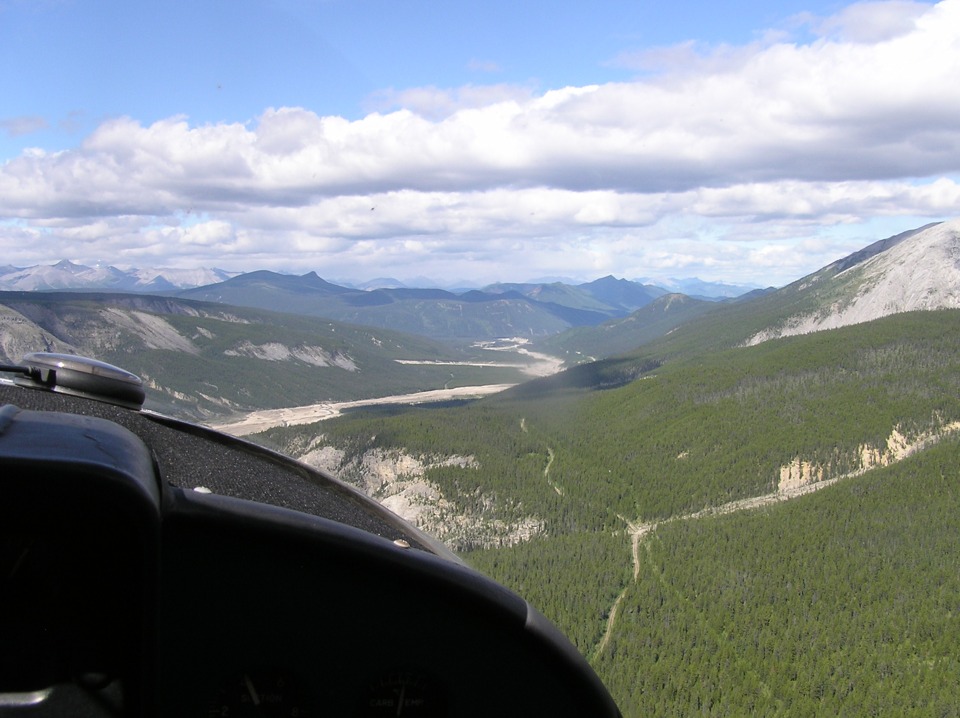