July 23, 2007:  Day 4 continues at Watson Lake, Yukon Territory with this picture of the terminal building and control tower before a Westbound departure following the Alaska Highway. 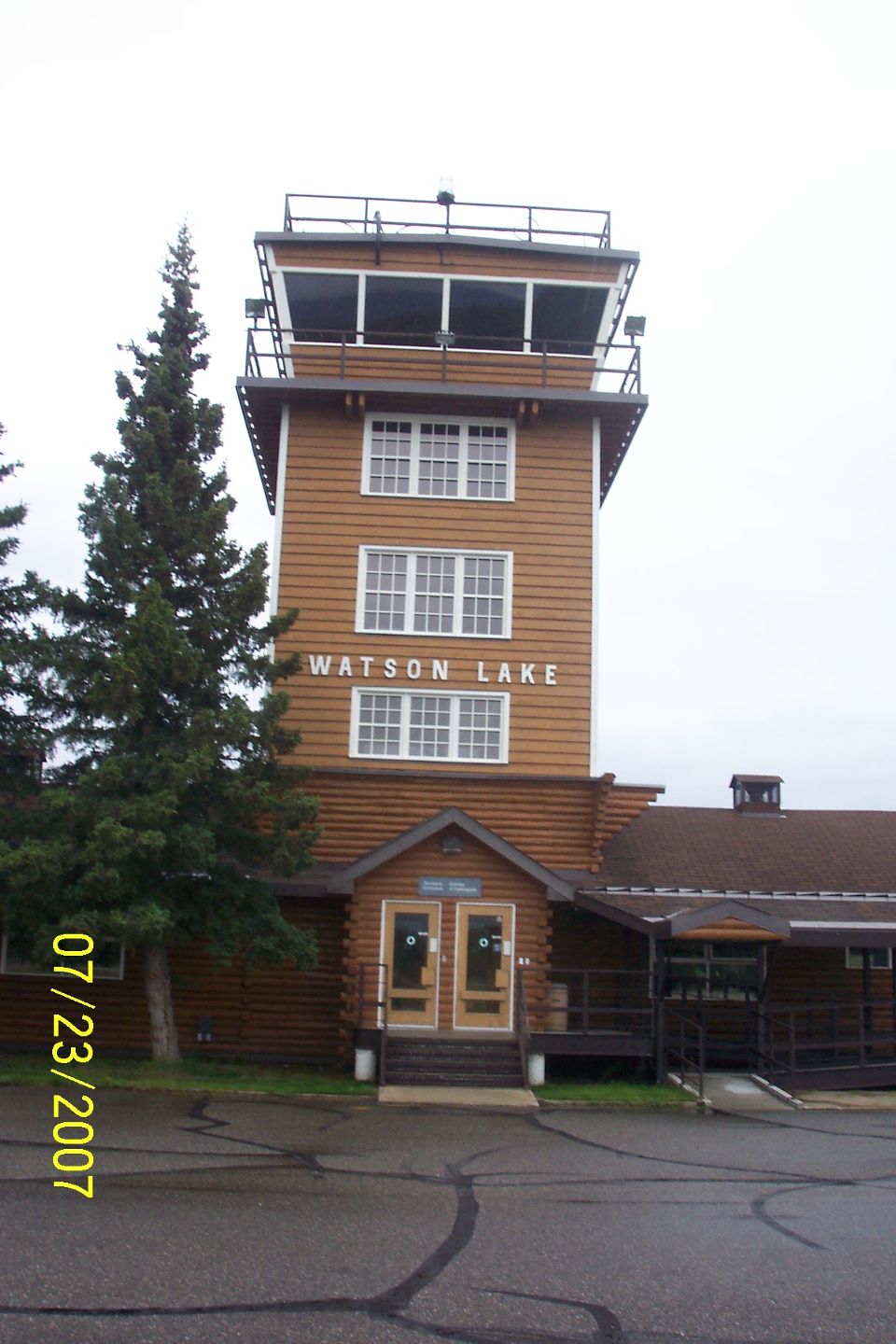 I zoomed in a bit closer on the aerial photo of the airport to show the location of the photos taken at the fueling area.  The green GPS ground track shows where the airplane is parked on the ramp. 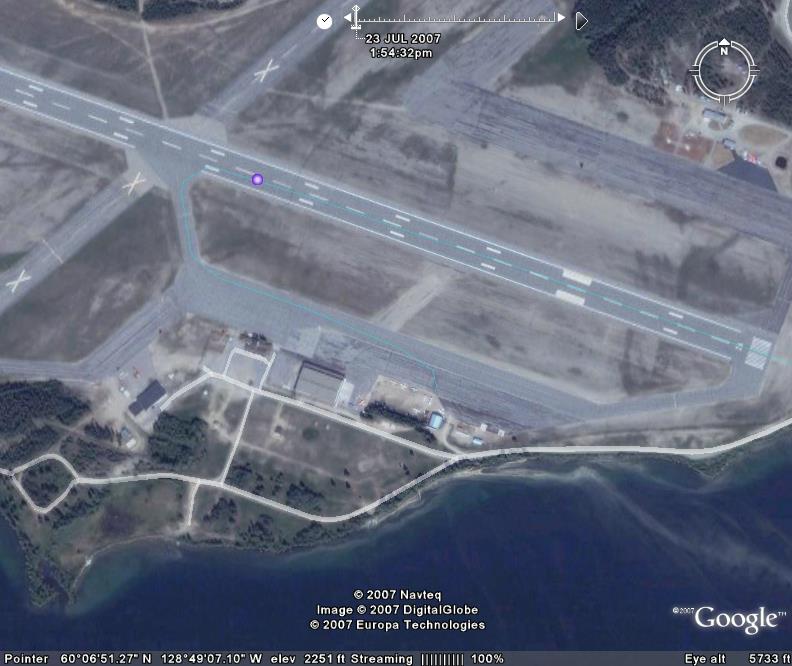 It appears that a lot of folks have their planes on wheels during the summer.   I refer to the sets of floats in front of the hangar.  This hangar was built during World War II and you can read about the history of it by CLICKING HERE.  The same PDF article tells about the terminal building seen in the first photo at the top of the page. 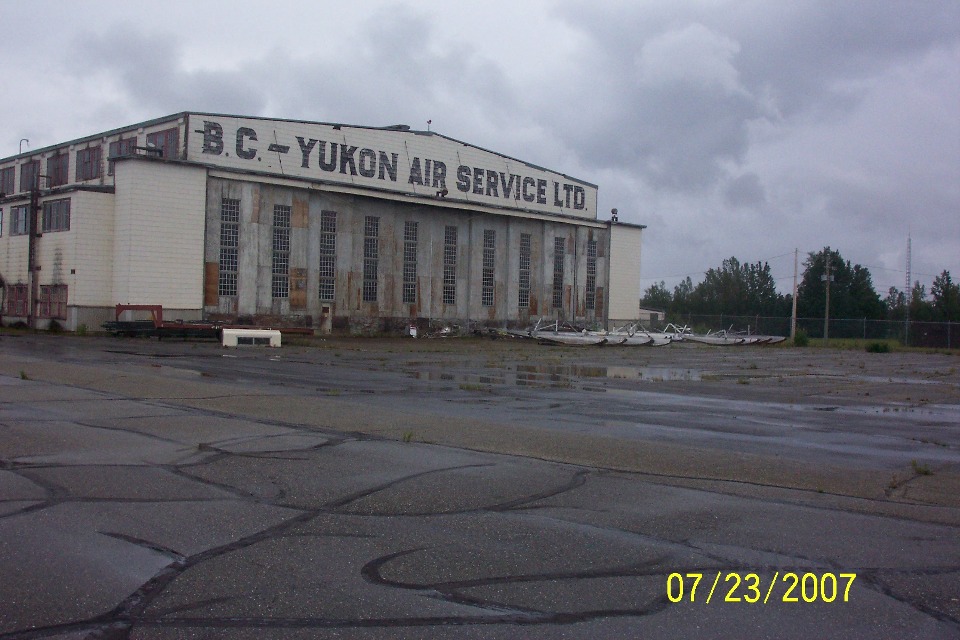 It was about 2:15 PM when they got the engine running and started to taxi out to the runway at Watson Lake Airport.  They had been on the ground about 1 hour and 2 minutes from engine shutdown after landing to GPS power up before departure.  About 20 minutes after departure, Terry took the next set of pictures of the Alaska Highway as they got back on course heading West.  The camera is looking South as they fly West, with Terry sitting in the pilot seat this time. 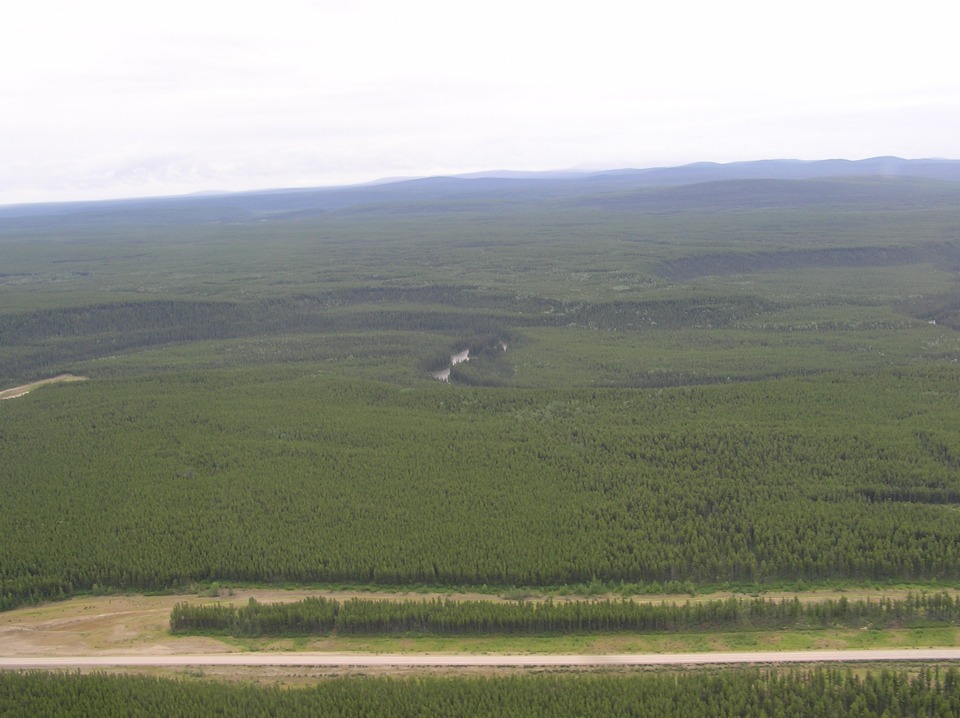 He took four pictures in rapid succession.  This second one shows the lonely road ahead looking west.  Take notice how the road dips down behind some trees just ahead, near the center of the picture. 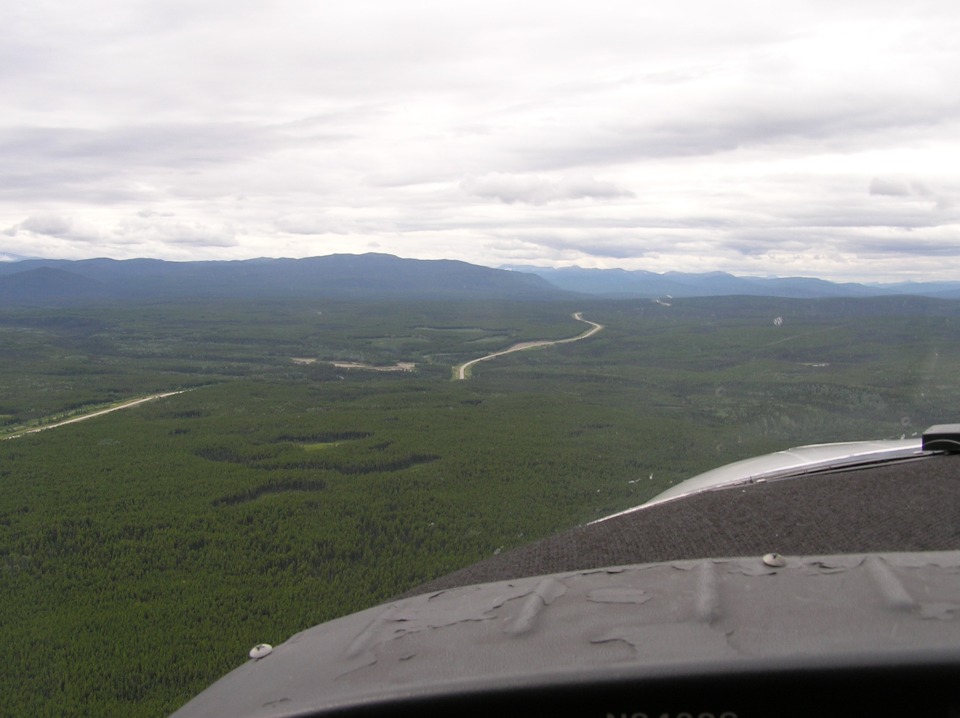 This is his first attempt at taking a picture of the bridge across a small river in the "dip" in the road.  You can see he rushed the shot to get it in before the view of the bridge was blocked by the wing strut.  It appears the camera has focused on the wing strut, blurring the distant objects. 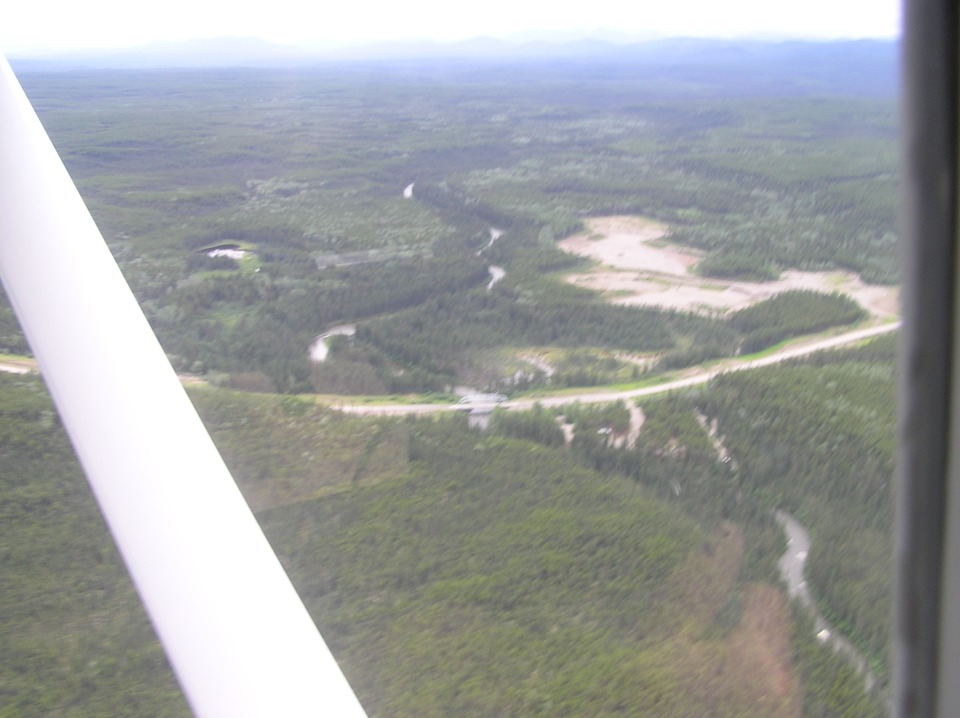 After the strut passed by the bridge, the shot below was taken with a sharp focus on the ground.  Now the real nature of this truss bridge is revealed along with details of the surrounding area.  I looked closely at the original high-resolution version of this photo.  There appears to be a roadside park with picnic tables and restrooms on this side of the bridge. 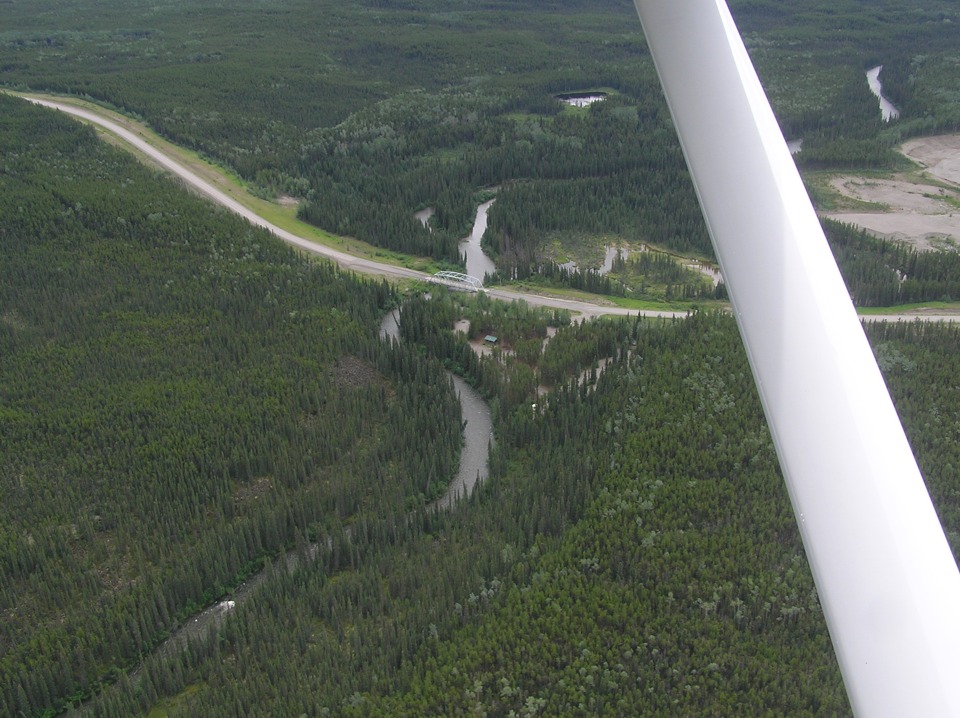 About 16 miles further down the road, the view has changed to this as the road turns to the southwest.  Watson Lake Airport was 2,260 feet above sea level in a nice broad valley.  The view ahead is taking us back into the mountains and back across the border into British Columbia for a short time. 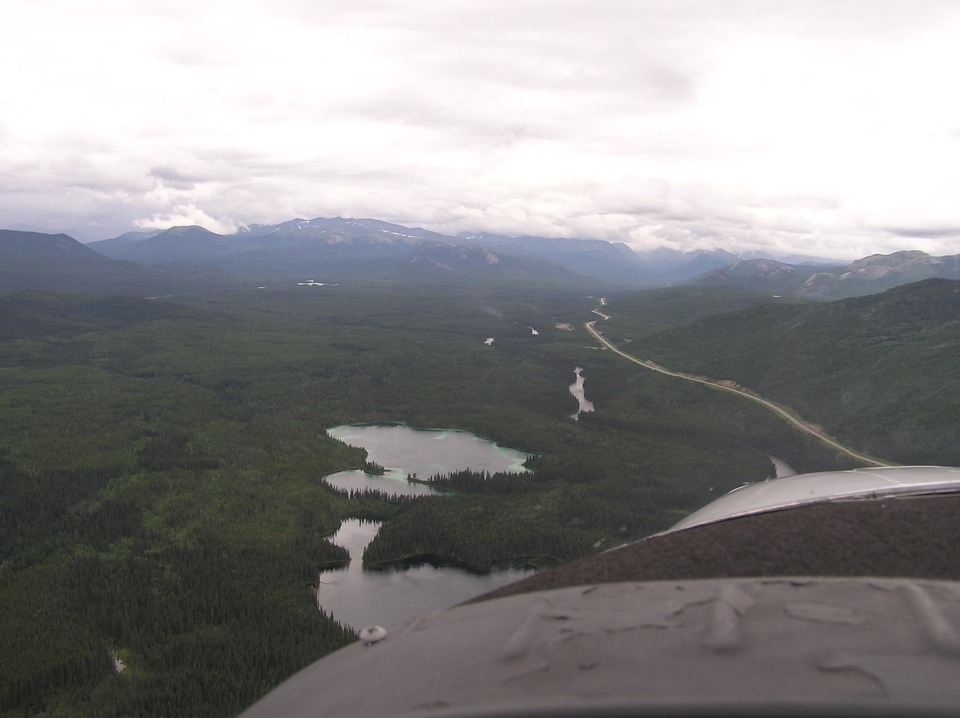