July 24, 2007:  Day 5 continues with a fuel stop at the Gulkana, Alaska airport.  Wendell took this photo of Terry getting out at the fuel pumps. 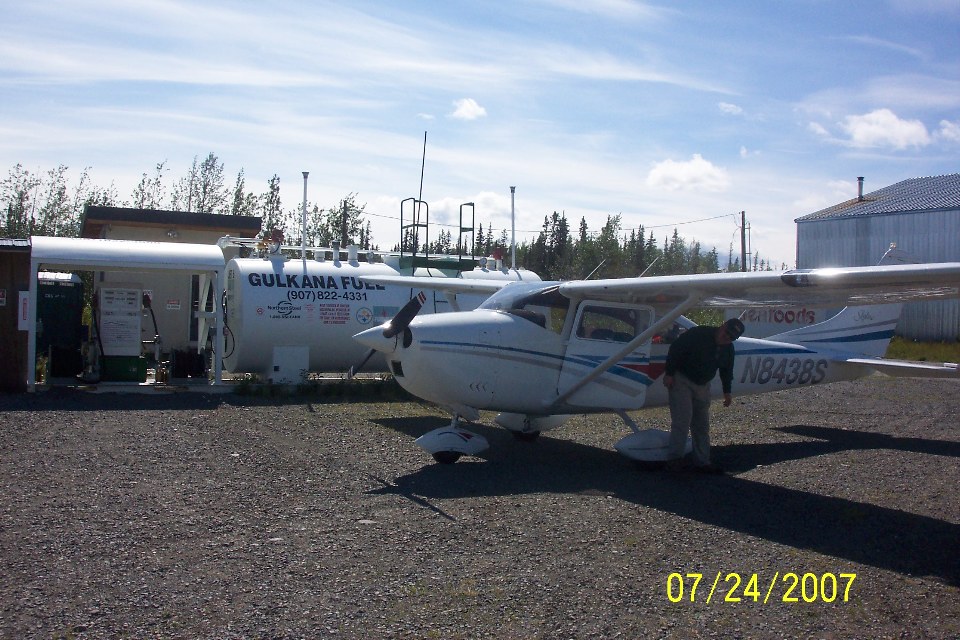 The little brown hut on the left side of the pump has this credit card machine in it.  I had to flip Wendell's photo 90 degrees before posting it. 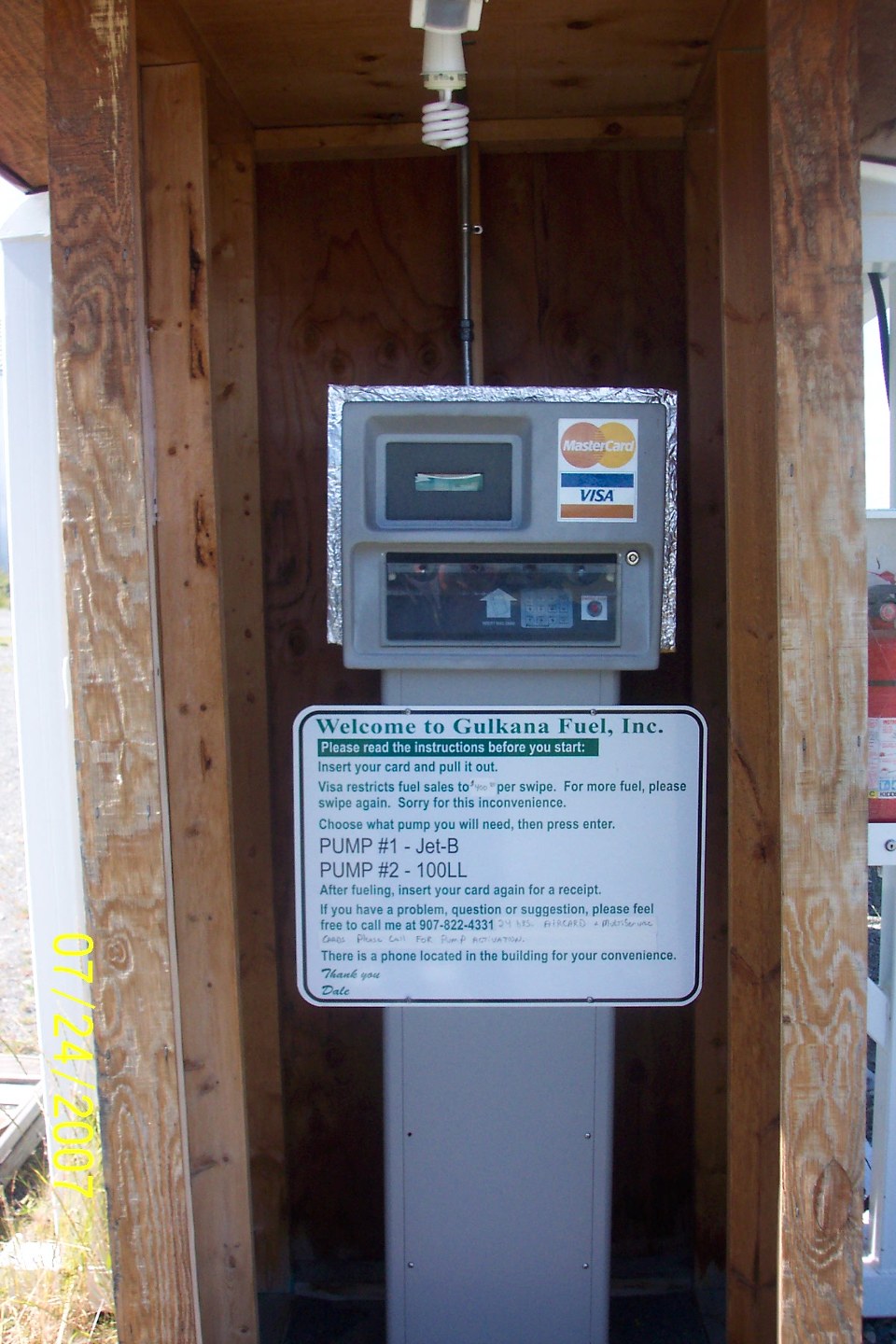 Terry provided this photo showing other airplanes on the ramp.  Notice that only ONE of them has wheel pants on it, and only TWO of them have nose wheels. 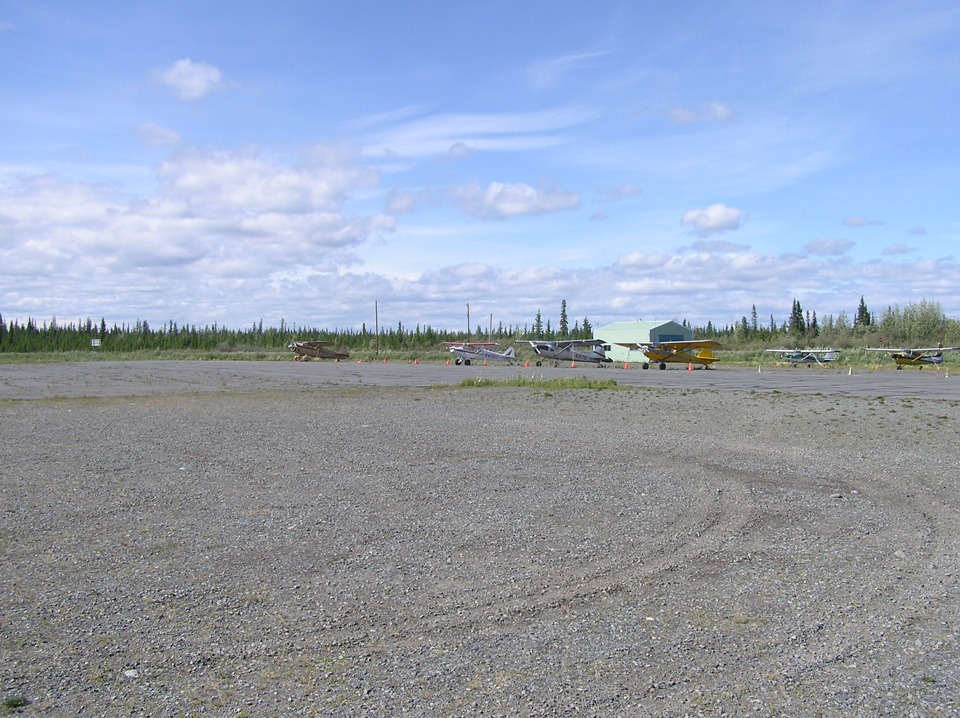 Terry was sitting in the right seat after takeoff and took pictures of the Alaska Pipeline that goes past the Gulkana Airport about a mile or so west of the airport and Alaska state highway 1. 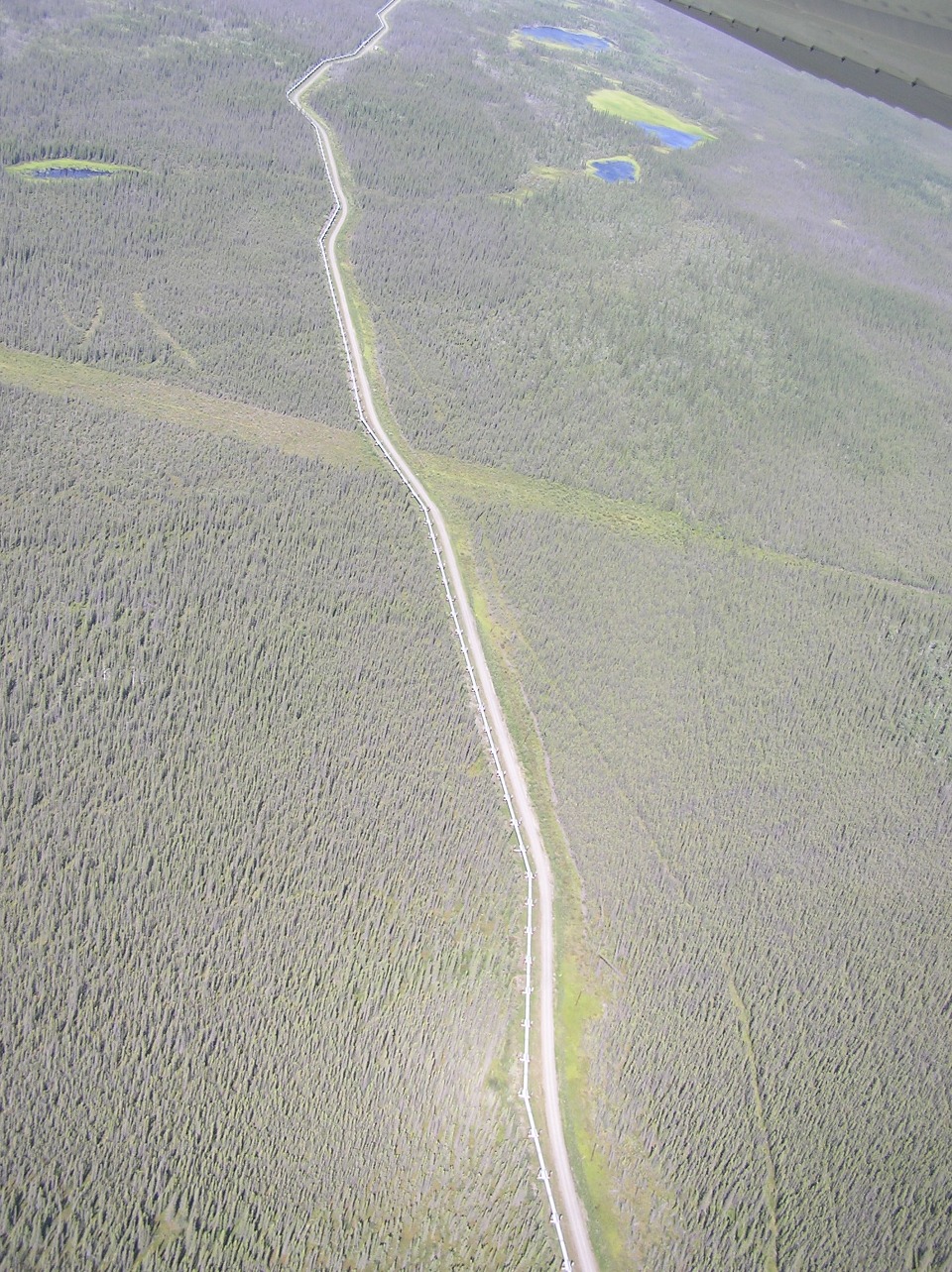 Terry then took a picture with Wendell's camera to get this shot of the pipeline with a wide view in the horizontal plane.  You can see the Gulkana Airport and Alaska route 1 in the upper right corner of the photo. 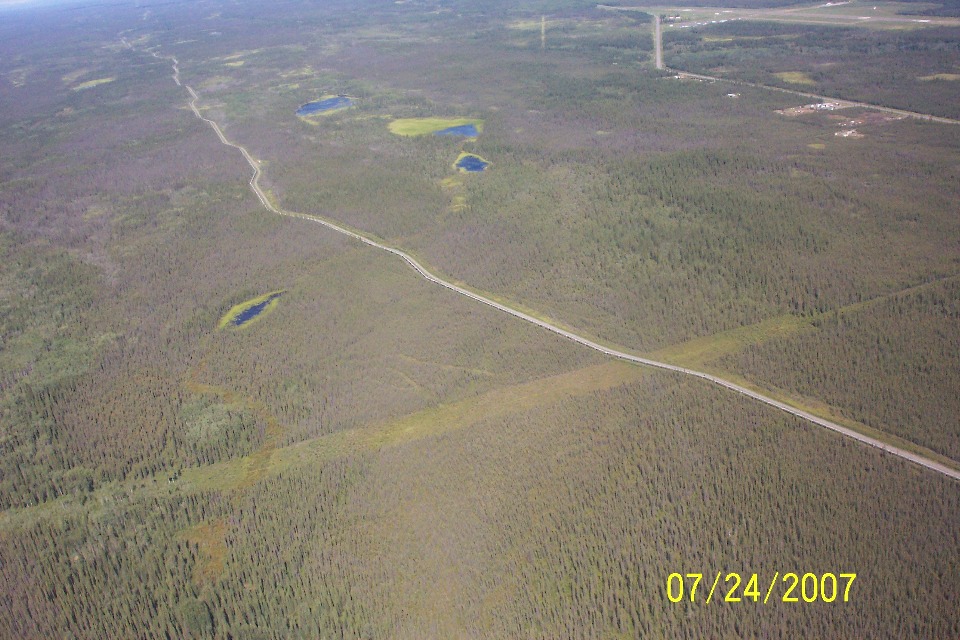 This second shot gives perspective to the photo as they climb to cruising altitude.  The horizon with mountains to the north gives a hint as to how wide this valley is in central Alaska. 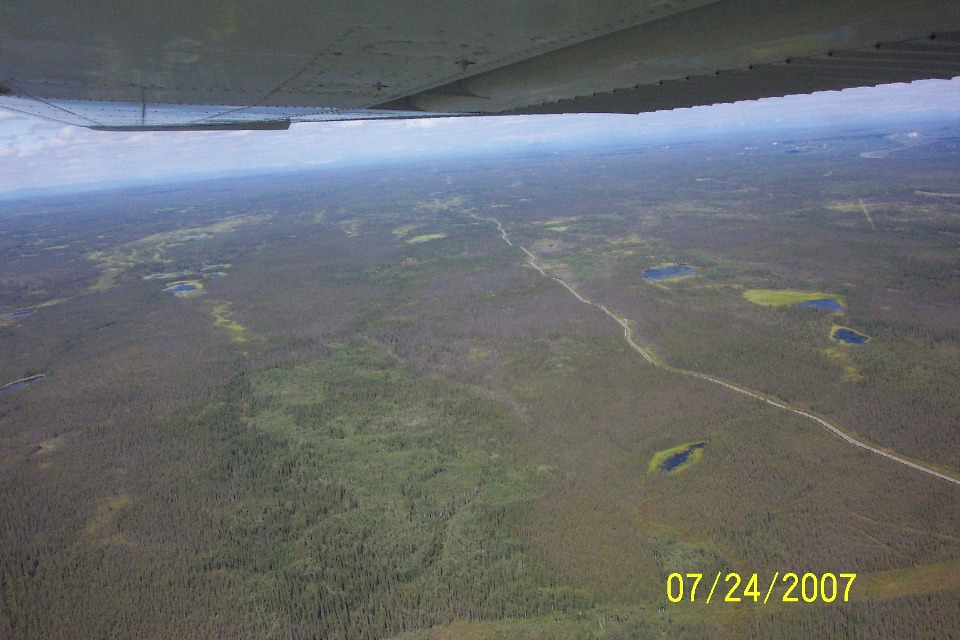 Terry starts looking ahead and to the left of the route of flight at the rivers, lakes, and glaciers that are part of the mountain ranges south of this central valley of Alaska.  The compass has a magnetic correction of more than 22 degrees EAST of true north in this part of Alaska.  They are flying roughly on a magnetic heading of 234 degrees to follow the highway toward Anchorage and the mountain passes along that route out of this river basin of Central Alaska. 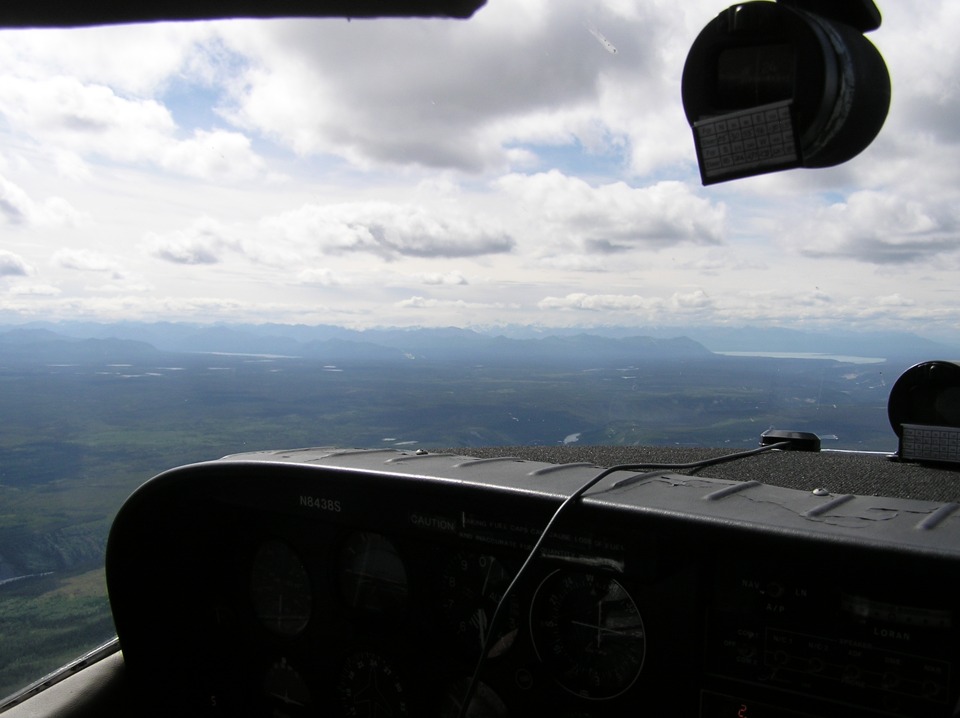 Tazlina Lake and Tazlina Glacier are off to the south side of the flight path about 30 miles from the Gulkana airport. 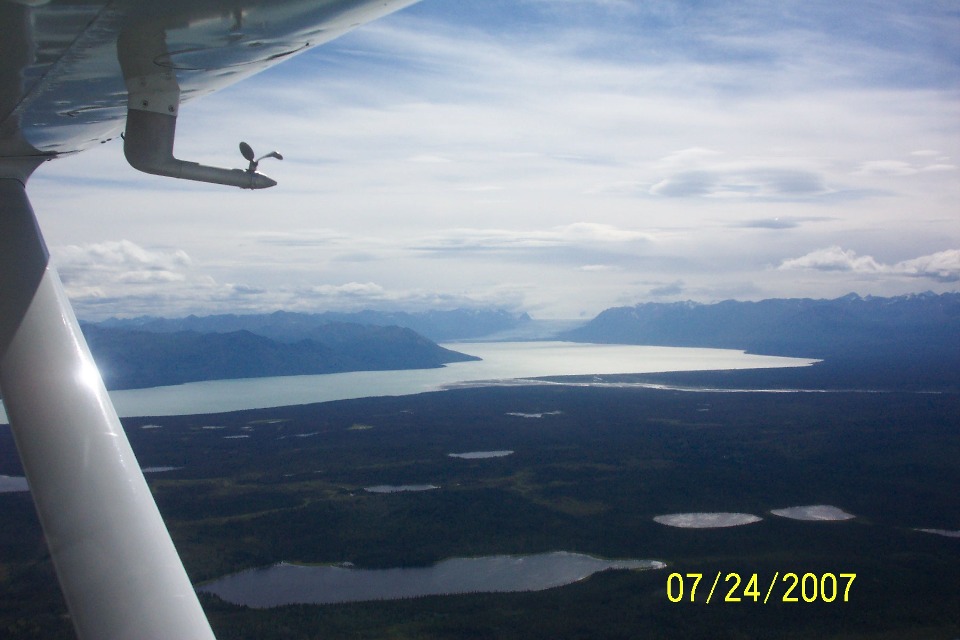 This sectional chart segment shows the highway they are following and two air routes cutting across the north side of the lake and the glaciers.  The blue circle in the upper right corner indicates the Gulkana VOR. 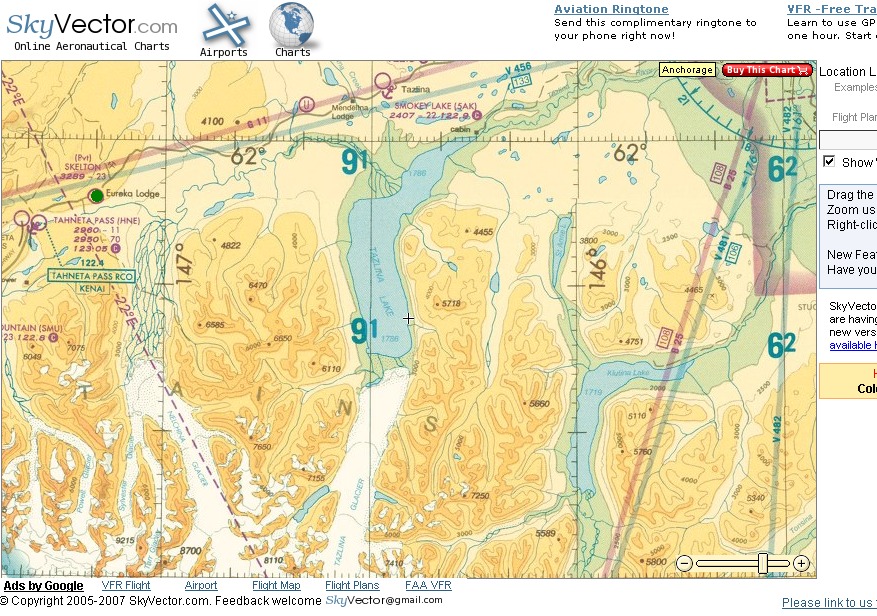