May 19, 2008:  The warmer weather has brought higher oil temperatures to Wendell's RV-8.  He recently had a visit from an RV-4 builder who gave one possible solution.  Wendell asked me to stop by Monday evening to hear his ideas.  The RV-4 builder talked about moving the oil cooler aft by inserting a "box" between the rear baffle and the cooler, then ducting more air into the bottom of the box ahead of the cooler.  Wendell wanted my thoughts about it and I realized the tight cowling of the engine on the RV-8 would require some creative air plumbing to get the job done. 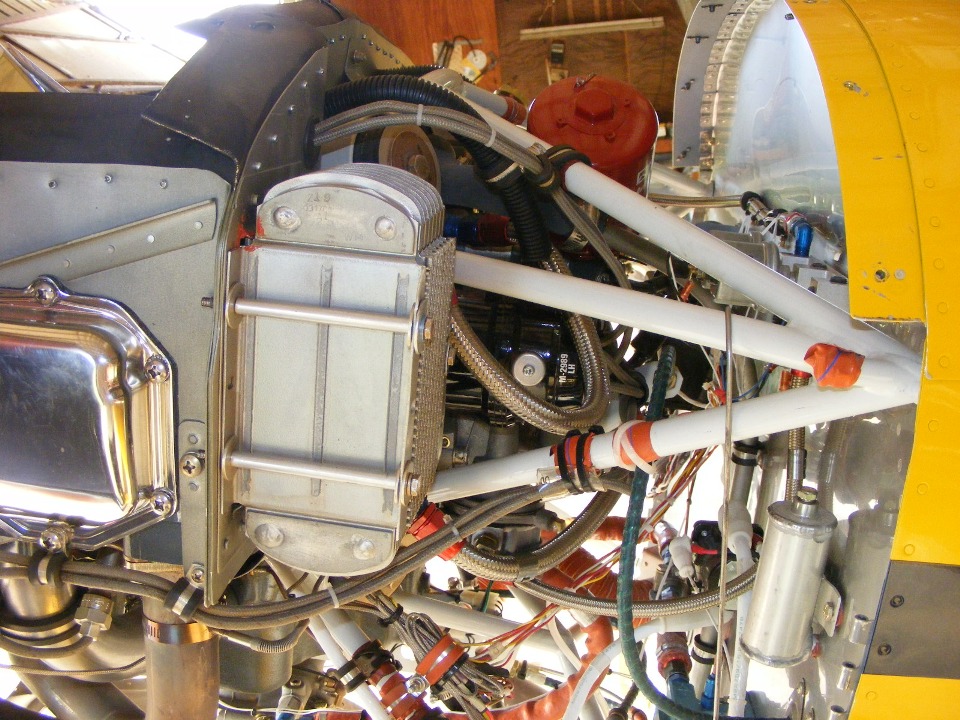 I considered the routing of the air duct that would need to be installed and cautioned Wendell about the route he had in mind near the exhaust headers from cylinders 2 and 4.  At the end of the session, I suggested a cooling duct similar to the ones that cool the mags.  The second duct to the oil cooler could originate on the back baffle and be routed to the oil cooler completely free of the hot exhaust pipes.  I also showed him this photo I took of an RV-6 at Oshkosh 2005.  If the box idea does not work, the remote mounting of the oil cooler and a very large duct to it could be the solution he needs. 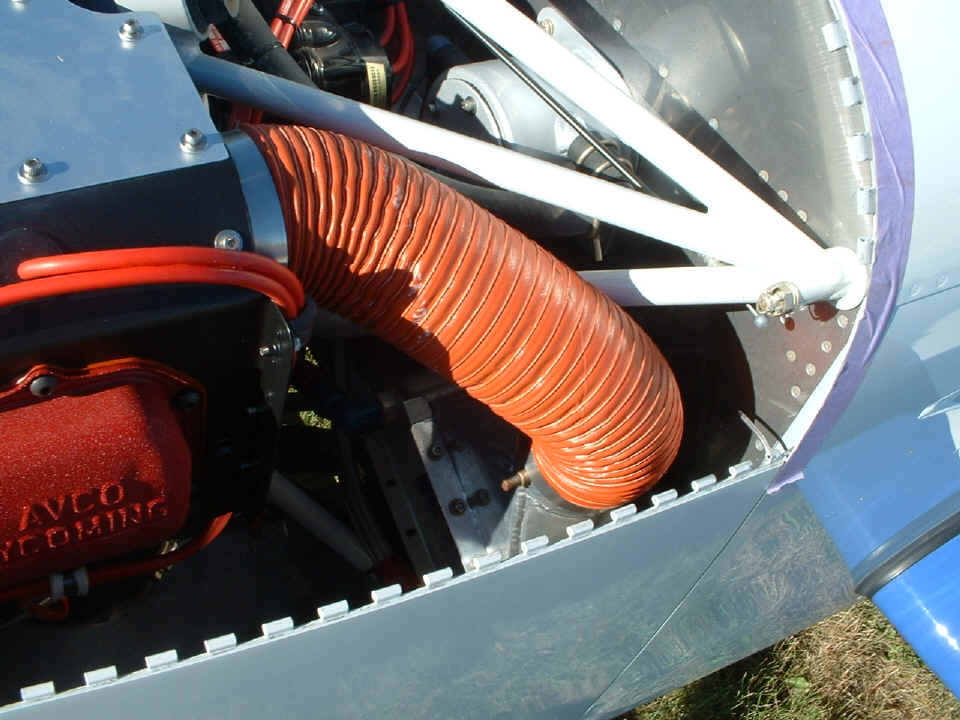 June 8, 2008: I realized that I did not update this page last week when Wendell, Jeff Johnson, and I worked to clear up a radio communications problem Wendell had during our flight on May 31.  We discovered some interesting things when the comm antenna was removed from the belly of the RV-8.  Wendell had removed it during the painting of the airplane and did not get the fiber washers, ground lug and internal tooth lock washer in the proper sequence when it was re-installed.  The ground resistance before we started was around 8 ohms.  By the time we finished cleaning the inner surface of the aluminum belly skin at the antenna, and installing all the parts in the correct sequence, the new ground resistance from the radio stack to the chassis of the airplane was about 0.1 ohms.   Things are fine now.

Wendell turned on the avionics and showed me the engine monitor and the faulty reading of the EGT probe on cylinder number three.  He indicated that it worked fine in a recent flight over to Collegedale.  What we have to do now is determine if the probe is bad or the engine monitor may have a problem.  It was reading over 2000 degrees instead of ambient temperature when we observed in it the hangar yesterday.   I instructed him to take some data on the next flight and let me know what he finds.

June 29, 2008:  Wendell told me about how he put an insulating plate and some 2000-degree insulation between the crossover header pipe and the front of the oil pan on his engine.  He said it helped a few degrees with his oil temperature.  He may not be able to get the temperatures he really wants until he gets a larger oil cooler.

July 4, 2008:  With this day as a holiday in the USA, I spent it with Wendell to help him get his canopy locking mechanism installed.  The aluminum doubler plate he made last weekend was lined up inside the canopy frame and fiberglass skirt, then a few target holes were back-drilled through the fiberglass skirt.  Wendell is using a small file and matching the shape of the "D-hole" to fit the lock barrel. 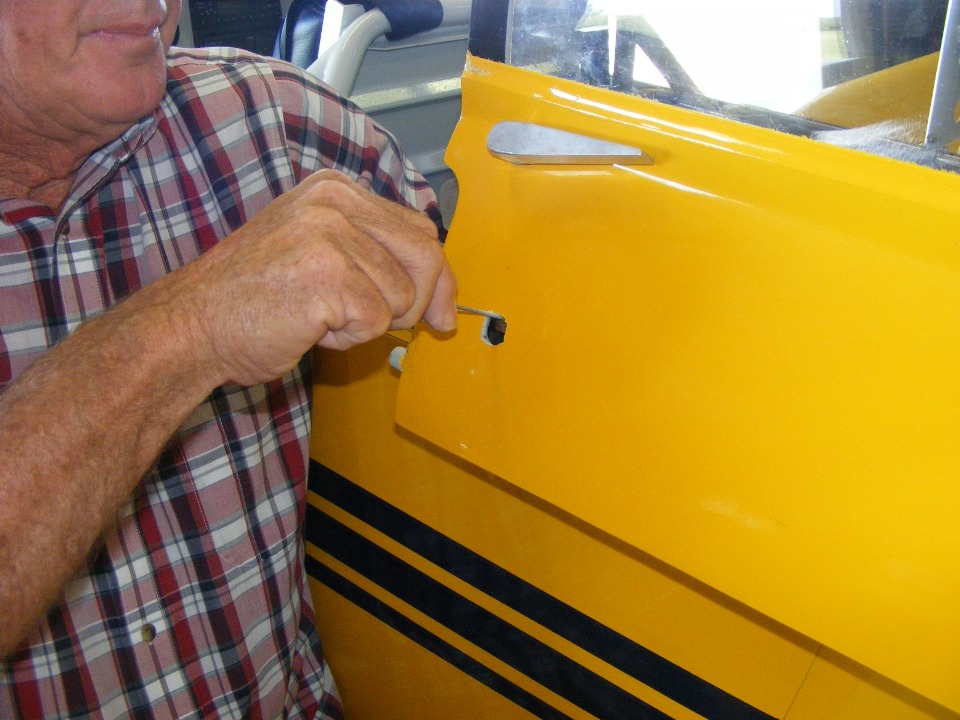 The lock needed a longer steel bar to engage the slot in the canopy deck.   The hole in the bar is a "square hole" and has to be filed to match the lock barrel precisely. 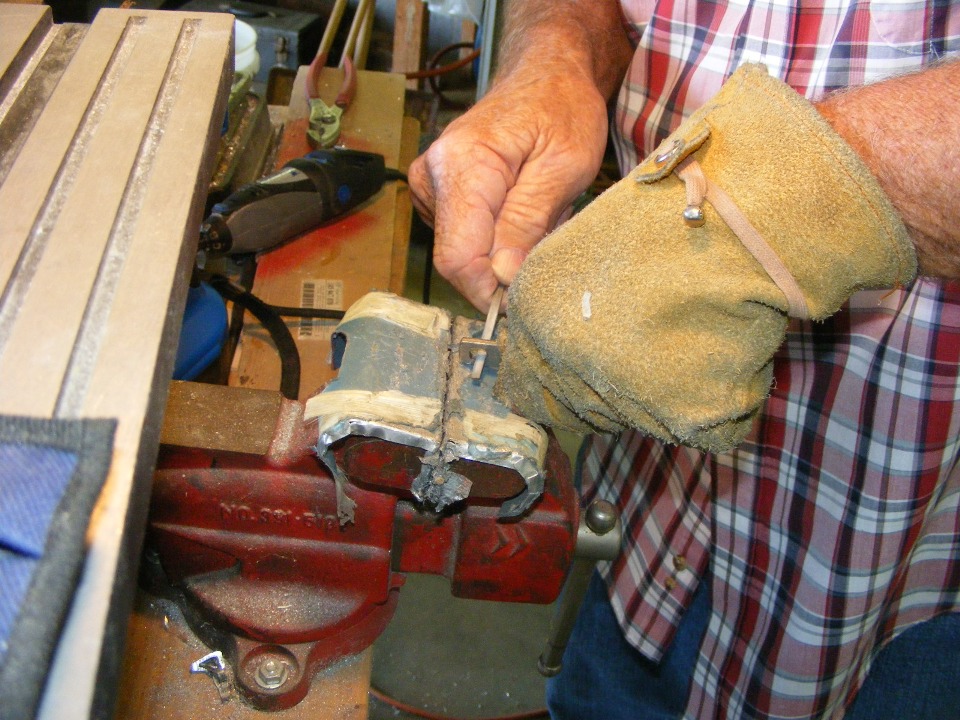 The locking bar had to bent slightly to be sure it would clear the longeron.   The canopy had to be latched securely closed before we could rotate the key lock until the bar touched the canopy deck.  Unfortunately, the place it touched would cut through the top edge of the bulkhead that is visible in this slot.  A few holes drilled with a #40 drill bit started at the point where the tab touched the canopy deck.   A few more checks were made to be sure of the angle the slot needed to be oriented.   Then the Dremel cutting wheel opened the slot and a flat file was used to smooth the edges. 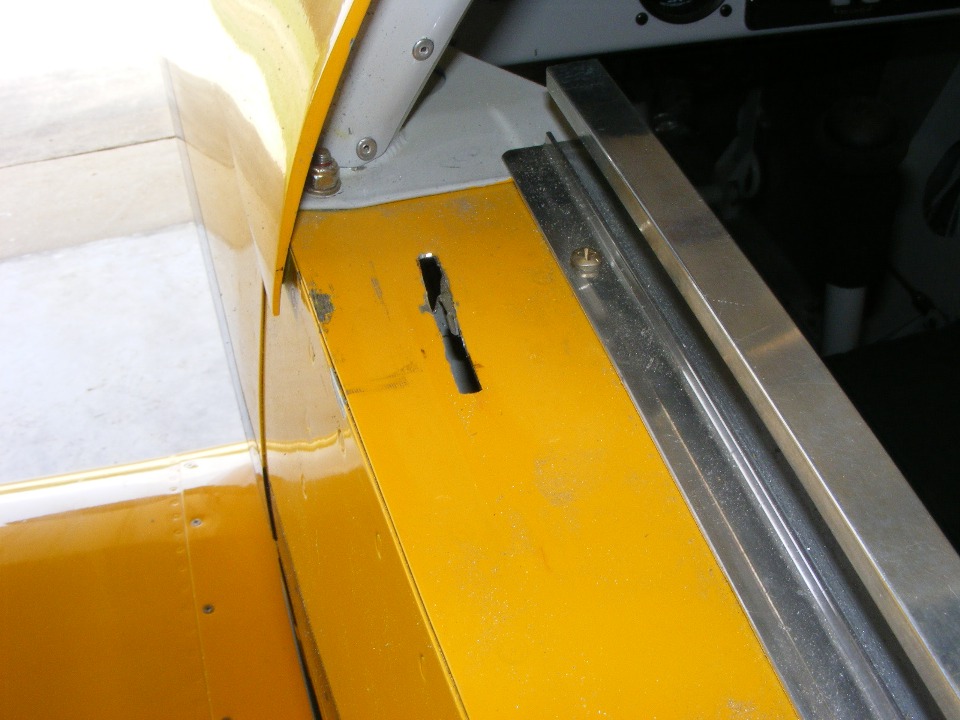 The new bar is longer than the one provided with the lock.  It had to be to engage the canopy deck at a point away from the longeron.  If the tab did not have the bend you see in it, the longeron would have been in the way.  YOU CANNOT CUT THE LONGERON!  That is why the slot is located where it is on the canopy deck between the longeron and the slider rail.  Notice how the locking bar is very close to the steel plate that is part of the canopy frame. 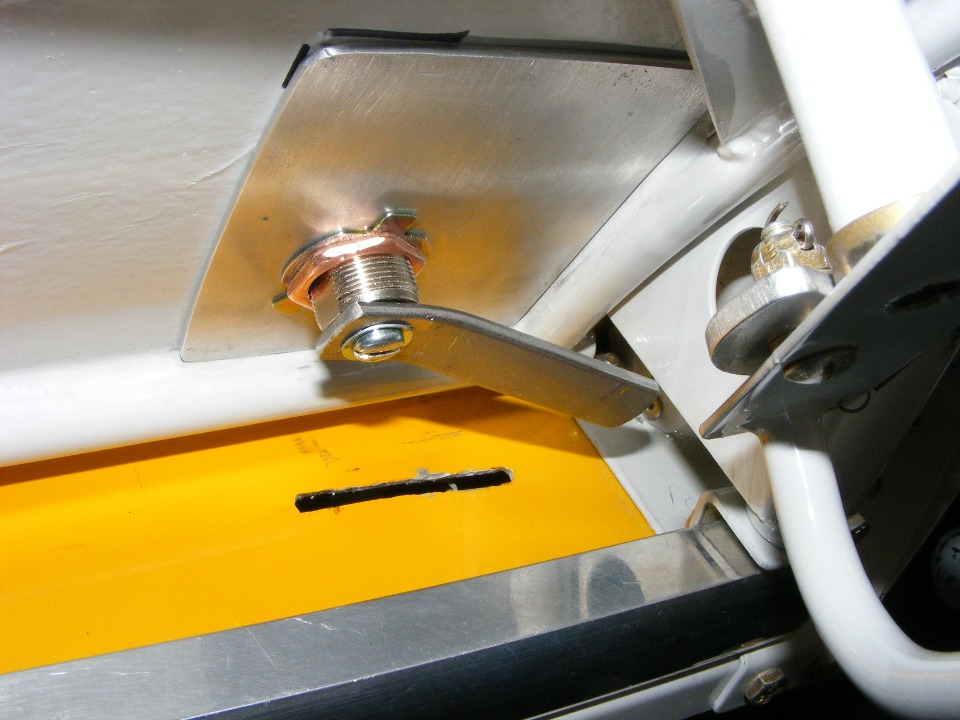 The back end of the slot had to be at a point where the key could be removed from the lock barrel.  Remember that with the bend in the locking tab, it draws a slightly-curved ARC as it turns, not a straight line.  The slot must of course follow that arc as it is cut into the canopy deck plate. 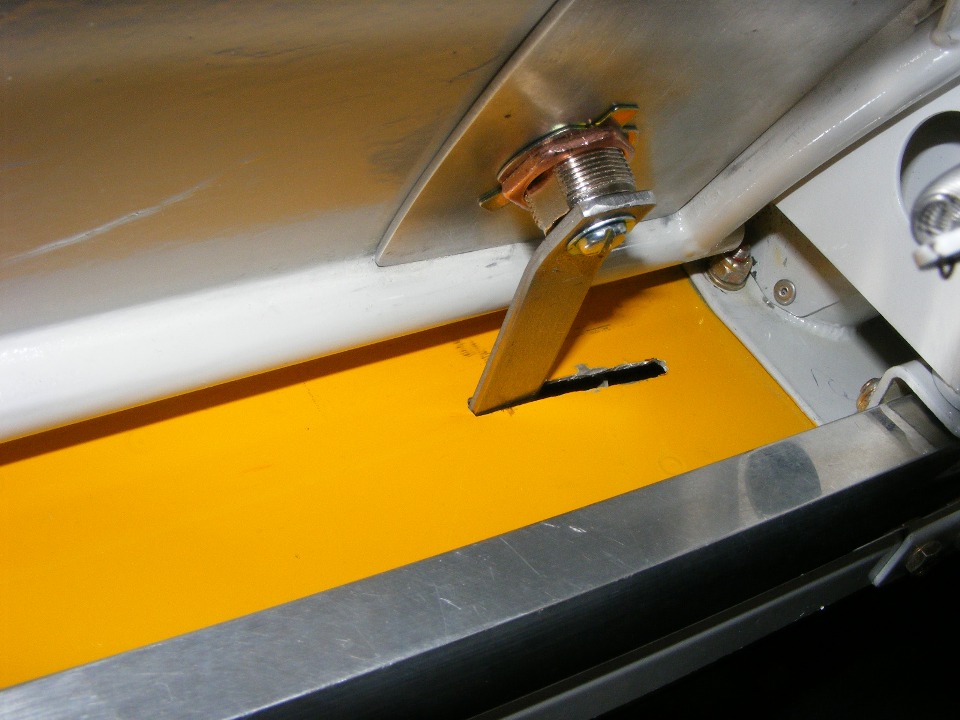 This photo was taken with the canopy open to show the location of the slot relative to the roll bar and its mounting plate on the canopy deck.  The bulkhead we cut through is visible in the slot.  The bottom line here is the lock barrel and the doubler plate hole should have been another 3/4 of an inch toward the rear.  That would have made this slot move aft (left in the photo) of the bulkhead below the canopy deck at this location. 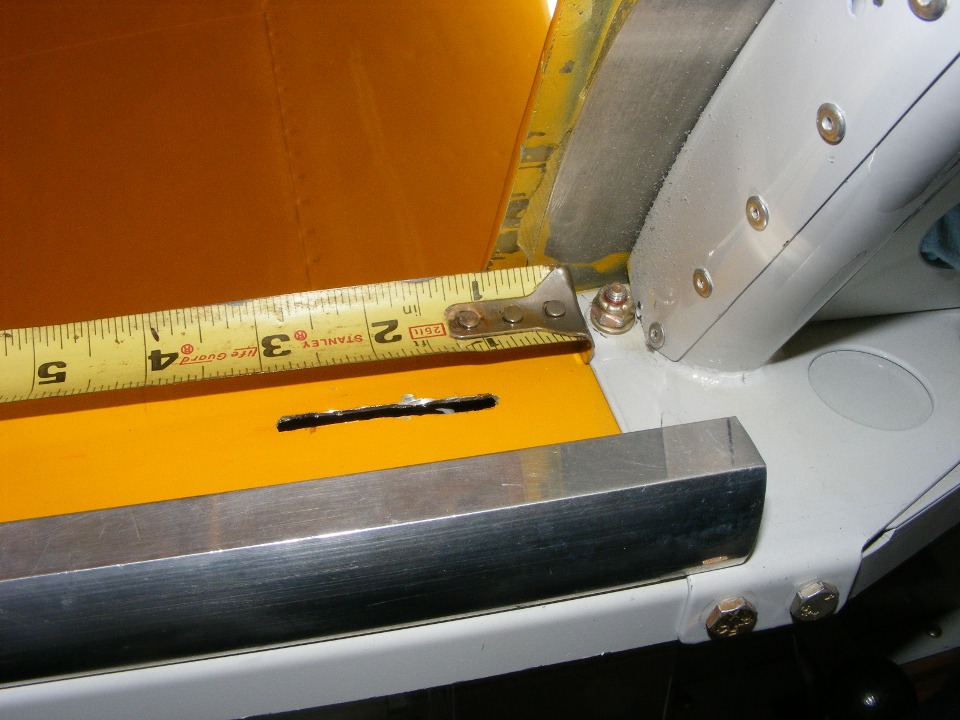 If the slot gets moved too far aft, the area between the longeron and the slider rail gets to be a problem and the tab bend angle could get excessive.  When you slide the canopy back and forth, you will see what I am talking about.  With the canopy all the way aft, the locking tab goes completely outside of the longeron and the fuselage side.  We had thought about cutting a second slot in the canopy deck for a partially opened locking position for those really hot days at Oshkosh.  But when you look at this photo, the issue of longeron clearance and why the location of the second slot is a problem becomes very apparent.  Look carefully just aft of the slot and toward the outer side skin and you will see one rivet in the center of the longeron.  There is probably less than 1/8" clearance from the longeron at the aft end of the slot.  It does not show in the photo, but it is the place on the canopy deck where the deck plate has a bend in it. 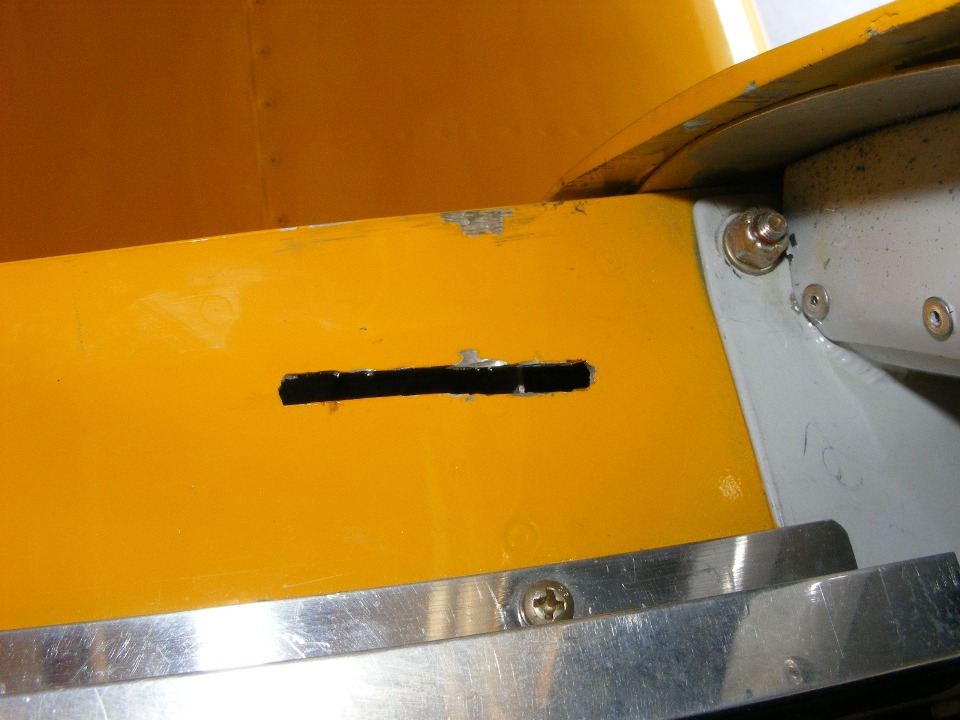 I realized when I got home to publish these photos that I did not take a photo showing the location of the locking barrel from the outside of the canopy skirt or provide dimensions of the doubler plate.  I hope to get those photos on my next visit to see Wendell.

July 5, 2008:  I had additional thoughts about how to do the lock mechanism last night before falling asleep.  I asked Wendell to take a few measurements for me this morning.  Here are some things to consider that may affect the way the lock is installed.

1.  If the lock swings from the forward position to the down position into the slot, there is no room to have a partially opened canopy to vent the cabin.  The length of the slot as seen above is 1.875 inches.  The width of the locking bar is 0.625 inches. If the lock were fitted to rotate from AFT to down instead of forward to down, that would mean the canopy could be partially opened 1.125 inches for ventilation when the lock is engaged. I remind you that this ventilation is for ground use (parked at an air show) since the lock can only be engaged from the outside.  The other thing about this configuration, the length of the locking bar is limited by the distance between the lock barrel and clearance from the steel plate on the forward face of the canopy frame.  The location of the canopy barrel in this installation is centered about 2.5 inches back from the front of the canopy frame flate steel plate, and up from the round tube of the canopy frame by about 1.25 inches.

2.  If you wish to have the lock swing from the aft position to the down position, there are several things to consider before beginning.  The drawing below should help clarify the decisions for either method of installation.  The orientation of the "D" hole for the lock barrel in the doubler plate and the fiberglass canopy skirt will determine which way the key rotates into the locked position.  The "D" hole is shown as the HEAVY DARK line in the drawing.  The thin circles represent the lock barrel outer "face" and shows a small off-center rectangle for the key opening in the lock barrel.  This assumes you want the key opening on the face of the lock to point in the direction of the locking bar.  The drawing is not to scale.

The first advantage of the AFT to down locking rotation is the locking bar length is not limited by the clearance from the canopy frame front steel plate as it is in the installation on Wendell's airplane seen in the photos above.  The location used in Wendell's installation just cleared the arc of rotation of the canopy latch handle.   Give that some thought in YOUR installation.  The other advantage is that it will NOT pass through the top of the bulkhead we encountered as seen in the photos above. The last thing about the AFT to DOWN rotation, the canopy will move aft when "locked" by the amount of clearance in the slot from the width of the locking bar.  This is the "VENTED" canopy opening position discussed above in the first paragraph of today's web posting.

The next thing to consider is the SHAPE of the locking bar, or how it is bent to clear the longeron as it passes into the slot in the canopy deck.  The shape used in Wendell' installation was "A" below.  You may want to consider "B" to insure more clearance between the longeron and the canopy rail on the canopy deck plate.  The dashed lines in the three side views show the location of the square hole in the locking bar.  Consider all the items I have discussed above when making your decision before you drill any holes or cut a slot.  The location of the bends and the angles are chosen by the builder as needed to fit the installation.   Again, nothing below is drawn to scale.