"ENTERPRISE" Back in the Paint Shop for Touch-up - Page 163.

August 15, 2005:  I spent my weekend free time searching the web for information about the lowest 100 LL Avgas prices in the USA for upcoming flying trips.  I have created a map showing information on the various airports where fuel prices are lowest in the various states.  The map is so full of map notes, it cannot be printed as a complete USA map, but only magnified to look at one state at a time on my laptop computer.  I know the prices change periodically, but the idea is to find the airports where the prices are traditionally lower than the "big city" airports.

I also went down to the paint shop today to see how things are coming with "Enterprise".  Bill has cleaned up the stripes on the canopy skirts and the empennage fairing.  The spinner is ready for paint.  The left side of the fuselage behind the canopy is sanded down and ready to be repainted.  That is the area where the gold had a tint mismatch and the white stripe had some alignment issues.   There were some rivets around the tail emblem on this side that had blue paint visible in the dimples around the rivets.  The tail art was covered and the white area in front of the emblem was sprayed with white again after the clear coat was sanded away to expose the white paint. 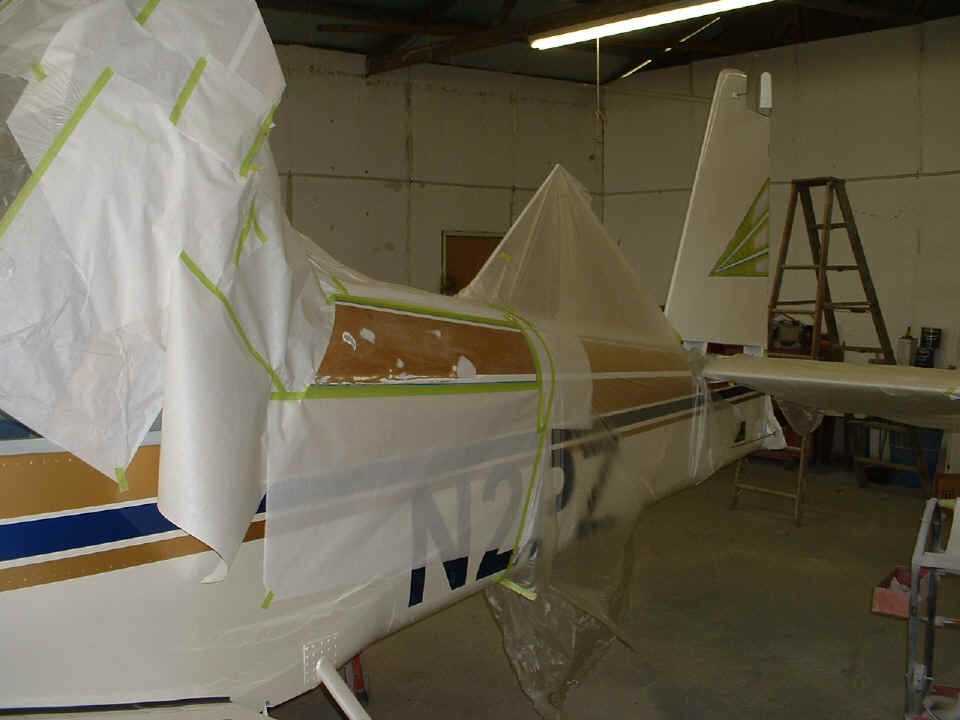 The right side just needed the blue pin stripe on the canopy skirt corrected and some minor work on the white area at the wind shield.  The fiberglass spinner nose cone and the empennage fairing are back in the corner of the shop to be finished.   The empennage fairing just needs clear coating, while the spinner has to be completely repainted with gold and clear coat. 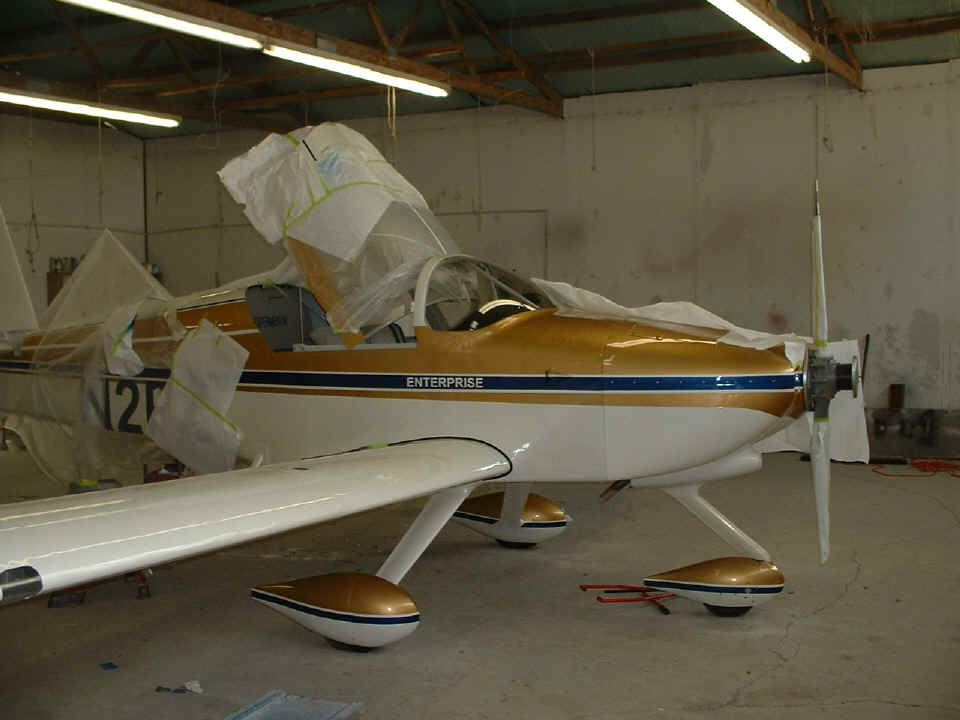 Bill assures me the airplane will be ready to fly away on Wednesday, August 17, 2005.

August 16, 2005:  I brought home my electrical components box from Wendell's hangar when I left the paint shop yesterday.  Last night I had to repair my data power cable I use in my car with the Garmin GPS 296.  I used a piece of polyethylene tubing to go around all the wires and the plastic plug assembly.  Unfortunately, I was not able to save the rubber right angle plug cover and ended up sealing the repaired connections in epoxy inside the tubing.   Here is a closeup of the plug I repaired and an original GPS 296 power plug from the AC power supply that came with my 296.  This failure of the plug taught me how to properly UNPLUG the cable in the airplane in order to NOT cause similar damage. 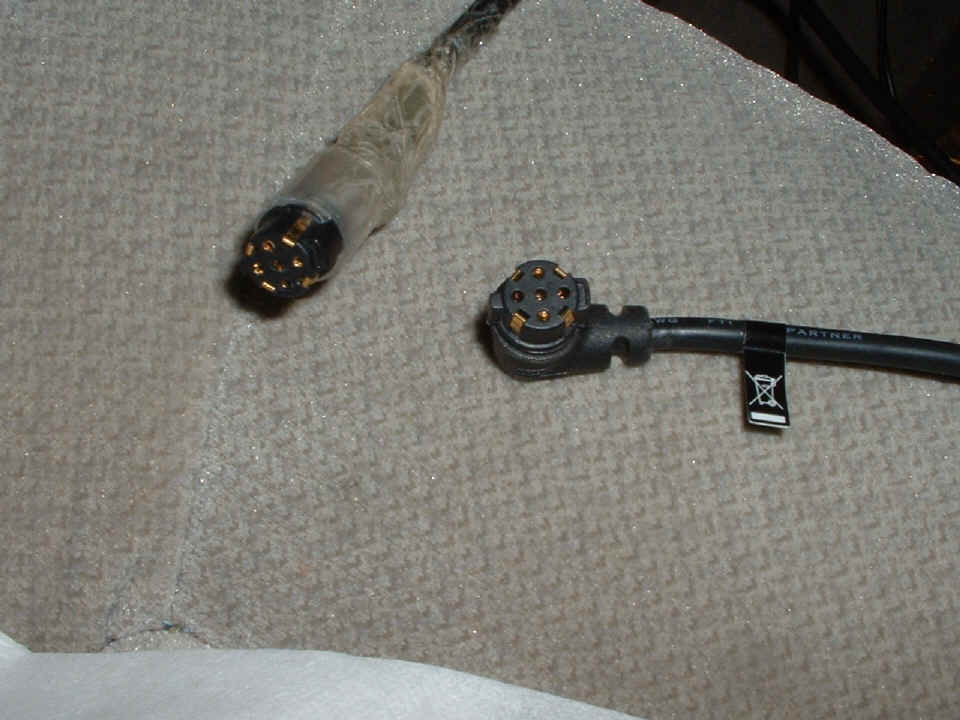 I also took this picture of the Wilson Airstrip and paint shop for those who were interested in where I got the airplane painted.  This view is from the south end looking northward.  The white building is the paint shop/hangar.  The gravel "driveway" is going to a house out of the picture to my right.  I always start my takeoff run from the grass just beyond these gravel "tire tracks."   The length is 2000 feet down to the bushes and short trees at the north end of the runway. 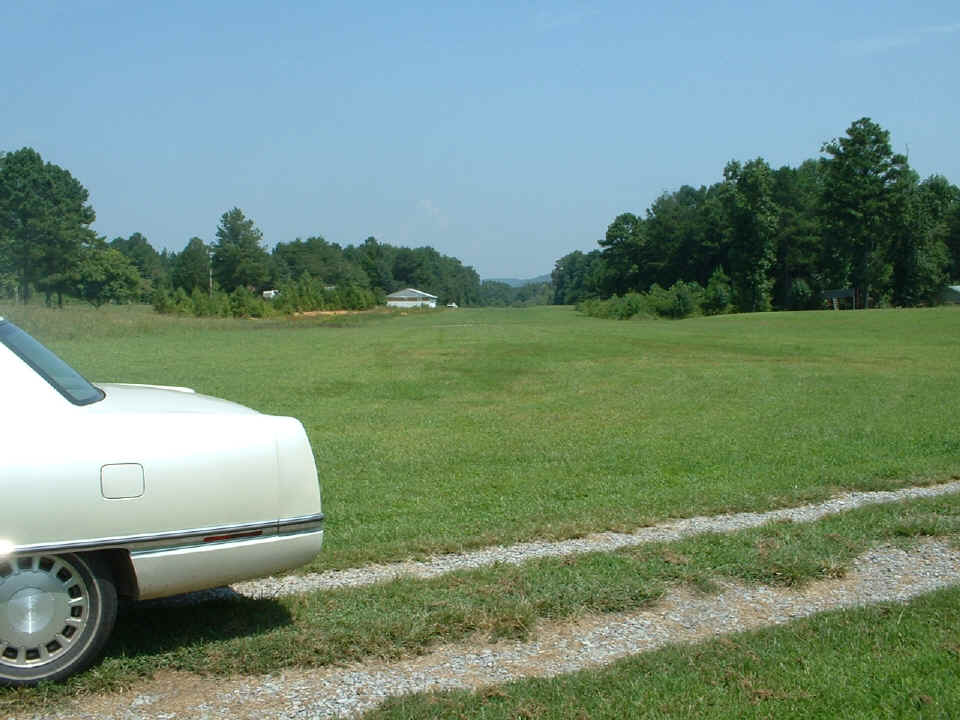 August 19, 2005:   Needless to say the airplane had a minor setback in the paint shop and was delayed an extra day.  I got a chance to fly it out of the airstrip at Wilson (GA03) this Friday morning.  I made a pass across my home field and Wendell came out to wave as I flew past the hangar at 190 MPH about 300 feet AGL.  I headed over to Collegedale at a more liesurely 135 MPH in the hazy late morning conditions.  I could not get together with Rich Nadig, but did manage to see Larry Champion for a short flight with him in the right seat.  He had a chance to see the Dynon work and get the feel of the airplane once we had cleared the pattern at 3M3.  After that we climbed to 5,500 feet in the practice area East of the airport.  After Larry had a made plenty of turns and climbs, we headed back down toward the Collegedale airport.  I talked him into the pattern with the "normal" approach and pattern power and trim settings to get the feel of the airplane in slow flight.  I asked him when was the last time he landed at Collegedale and what he was flying that day.  When he said it was in a Citation Jet, I took the controls and demonstrated the approach I learned from Mike Seager diving in from way above the glide path of the VASI lights.  I am always amazed at how well the RV's round out over the runway in the touchdown zone after these steep decents to the runway.

After the 0.6 hours of flying with Larry, I got the airplane ready to head home to Chickamauga and Folks Field.  After taking off from Collegedale I thought about taking Wendell for a ride when I saw a towering cumulus cloud that warned of a nearby thunderstorm.  It was raining about five miles south of my home field as I turned into the wind for the approach from the south.  I came in for a landing to put the airplane away and met Wendell on the ramp as I taxied up to the hangar.  He had the Aeronca Champ out the door and off to the side in short order and I pulled the Enterprise up and wheeled it around on inertia with the engine idling to avoid blowing stuff around inside the hangar.

The photo below shows the airplane parked back in the northeast corner of the hangar.  The right wing tip of the Champ is visible at the left side of this photo.   The gold area above the "N2" portion of the registration numbers was the main focus of the rework in the paint shop.  There were other issues, but this was the major area that needed rework as shown in the first photo at the top of the page.  Now I can concentrate on flying this bird somewhere again! 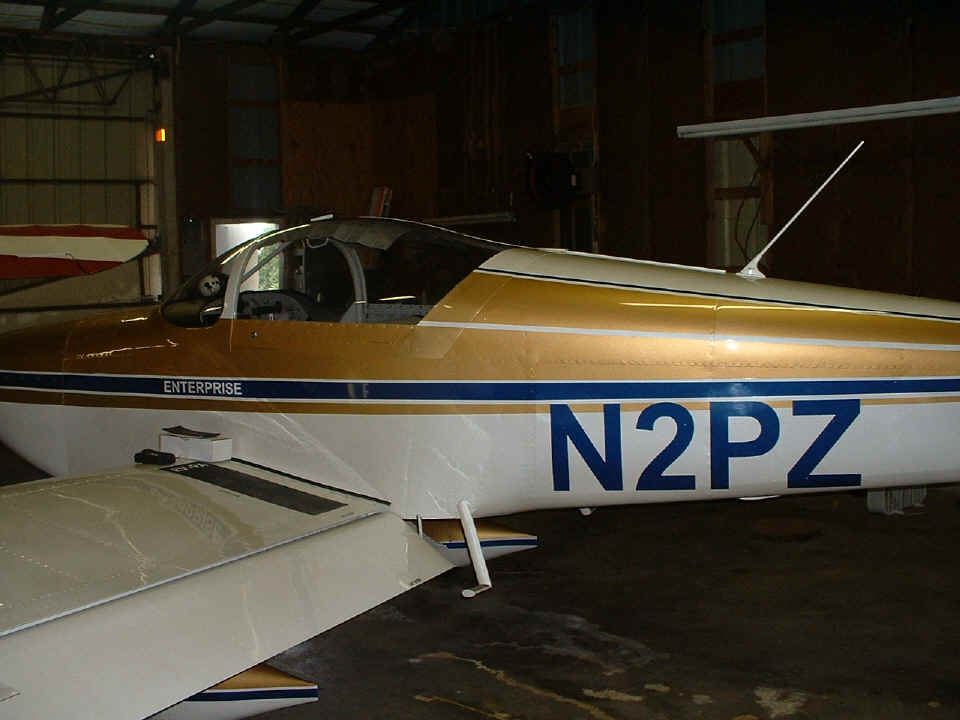 I called David Edgemon while I was waiting in the check out line at Walmart tonight.  If the weather cooperates, we may get a chance to fly together on Sunday over in the Huntsville, Alabama area.  The Moontown Airport (3M5) is having a fly-in on Saturday and Sunday, August 20-21, 2005.  I get the idea I am going to head over that way on one of those days (tomorrow or Sunday) and take some pictures.

The total was 1.3 hours in three short flights today.  The Hobbs meter on the home page has been updated.