July 22, 2007:  Day 3 continues in Canada with a departure from Whitecourt, Alberta around 1:30 PM Mountain Time.  Terry took this picture of a round lake or pond north of the flight path while they were about 70 miles NW of Whitecourt enroute to Grande Prairie, Alberta. 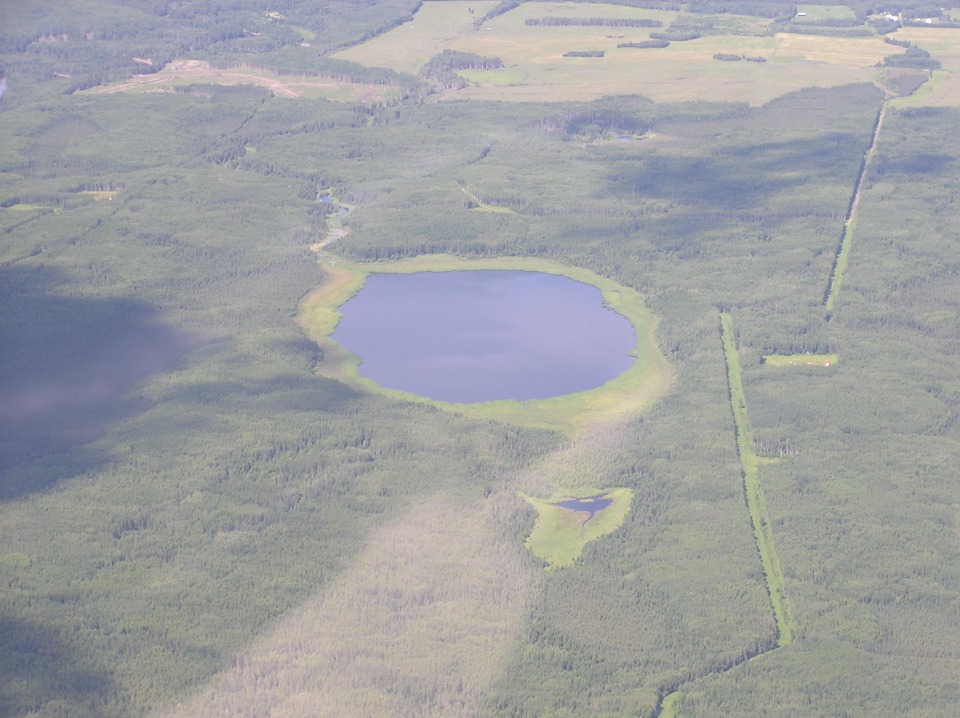 This "Christmas Tree" or "Arrow Head" lake was just off the left side of the airplane at a distance of 73 miles northwest of Whitecourt, Alberta. 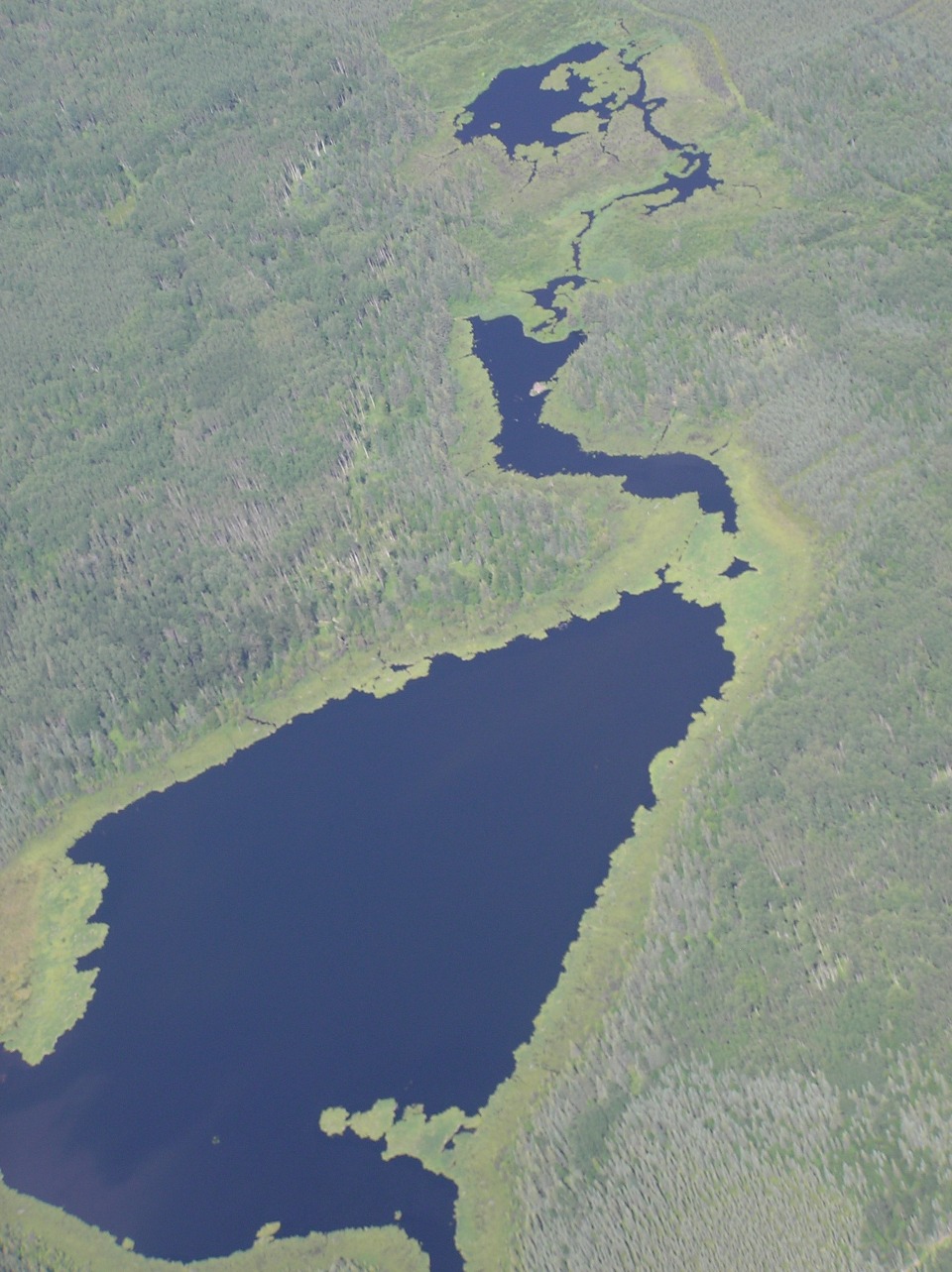 The city of Grande Prairie and its airport are visible a few miles ahead.   The city has a population of just over 47,000 per the 2006 census data.  There was no stop here, just a fly-over of the airport on the way to Dawson Creek in British Columbia. 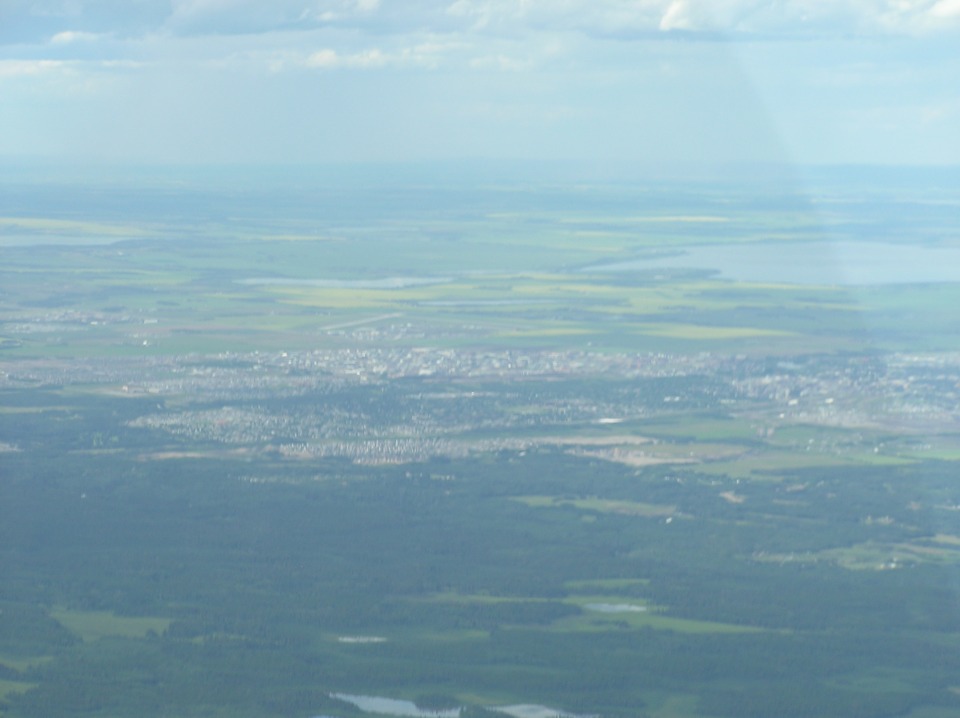 Terry took this photo looking west while flying at about 4.5 miles west of the Grande Prairie Airport. 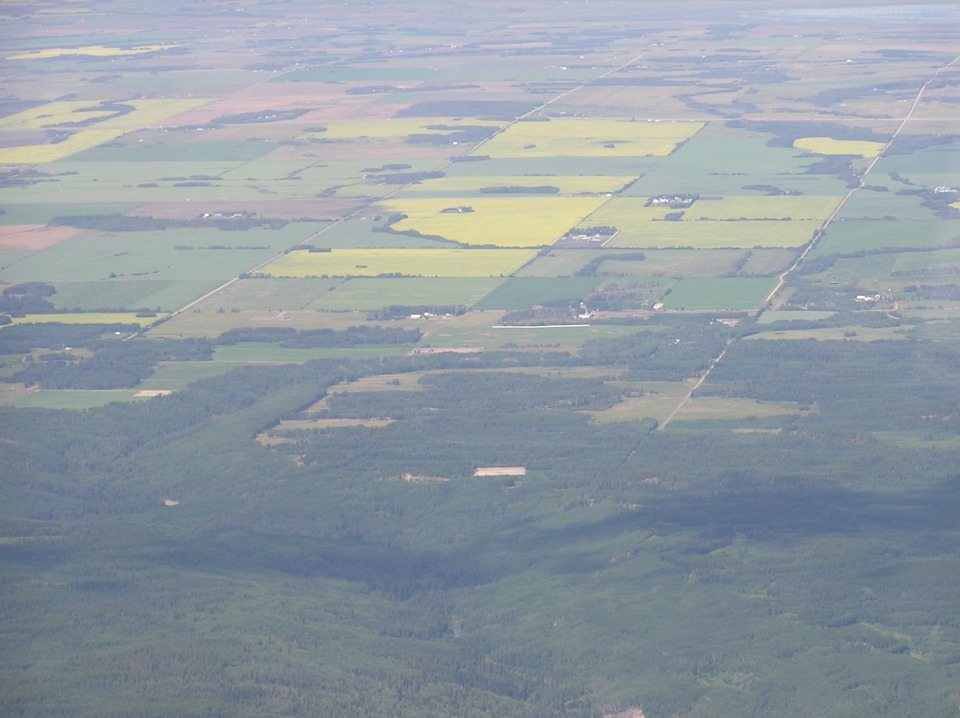 Then this photo of a lake-front community was taken by Terry on the north side of the airplane just about five miles northwest of the Grande Prairie, Alberta airport. 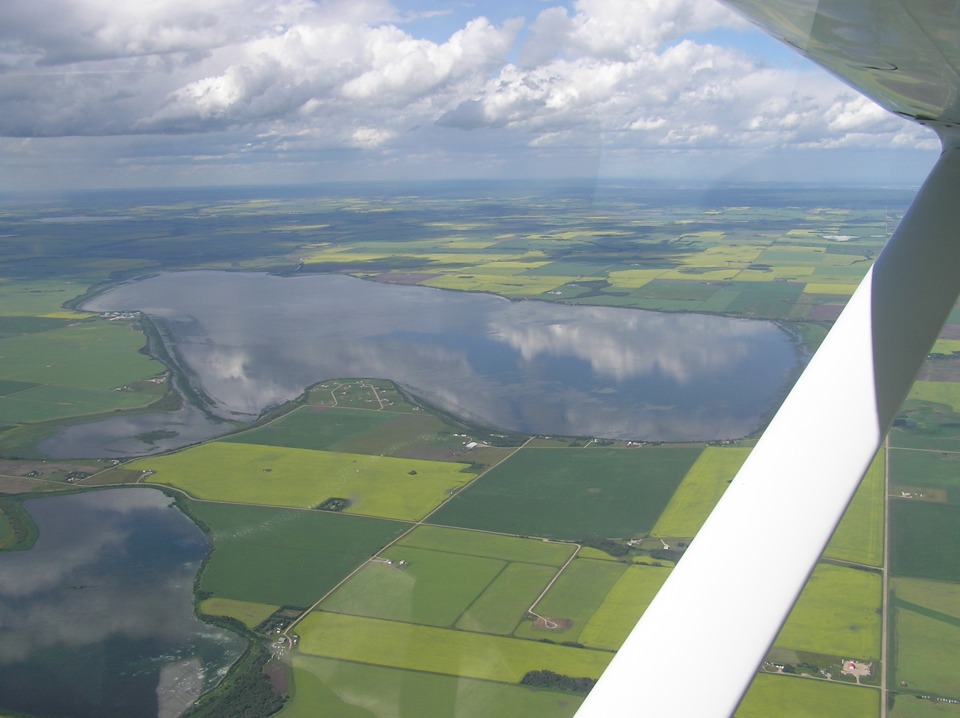 This similar photo was taken by Wendell just a few seconds later.  The time stamp on the photo is 3:37 PM Mountain Time.  Can you spot the reflection off the window in the photo below that is NOT in the photos above? 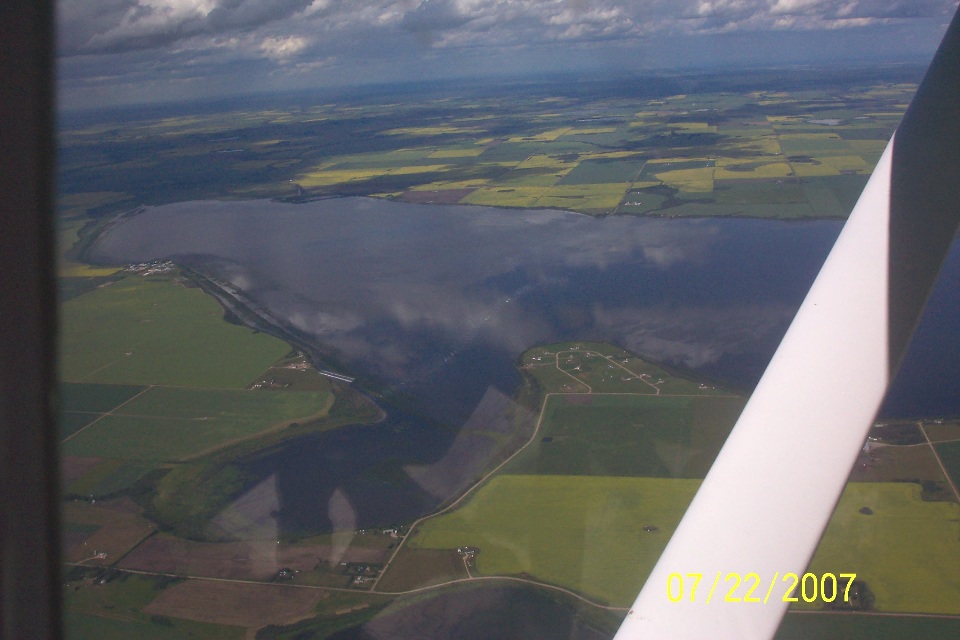 The next photo from Terry is taken about three miles from the Dawson Creek Airport around 4 PM Mountain Time.  This airport is just 7 miles west of the border of Alberta and British Columbia, but they are still on Mountain Time in this area.   Most of B.C is on Pacific Time. 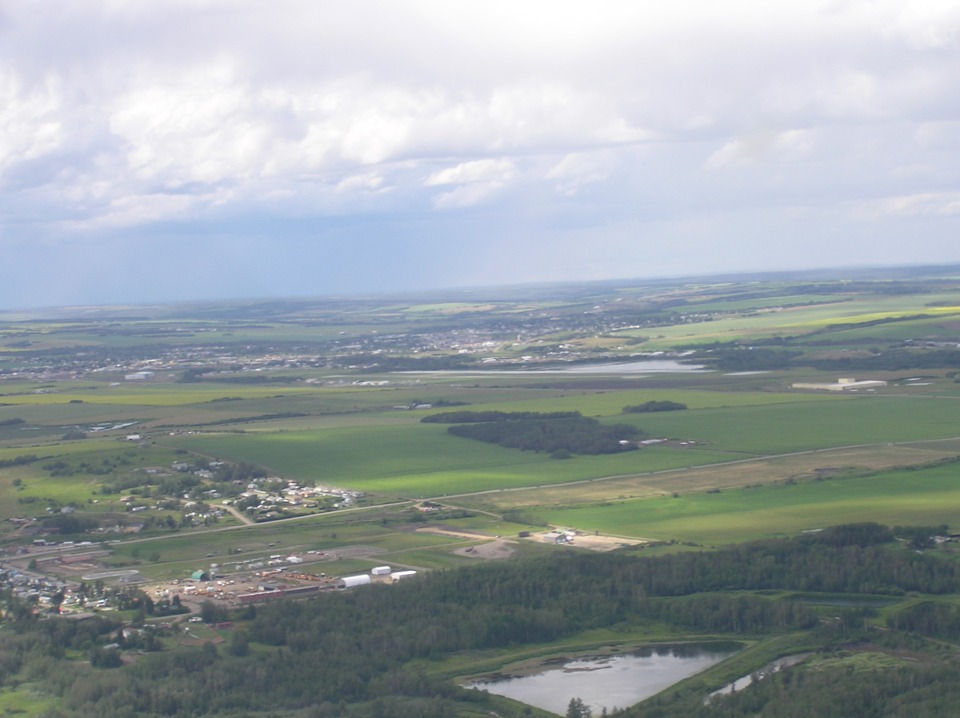 The last FLYING picture of the day is the line up for approach to runway 24 taken by Terry.  We're coming over the fence with what few approach lights there are here and a wind sock.  And yes, that is a water landing strip on the right side with one yellow float plane tied up near the far end.  The FBO and parking area for airplanes with wheels are on the left (south) side of this photo.  The GPS ground track data points indicate a distance of 210 miles flown from Whitecourt, Alberta to Dawson Creek, British Columbia.  The last GPS data point was recorded at 4:10 PM Mountain Time on the ramp at this airport.  That is a flight time of two hours forty minutes. 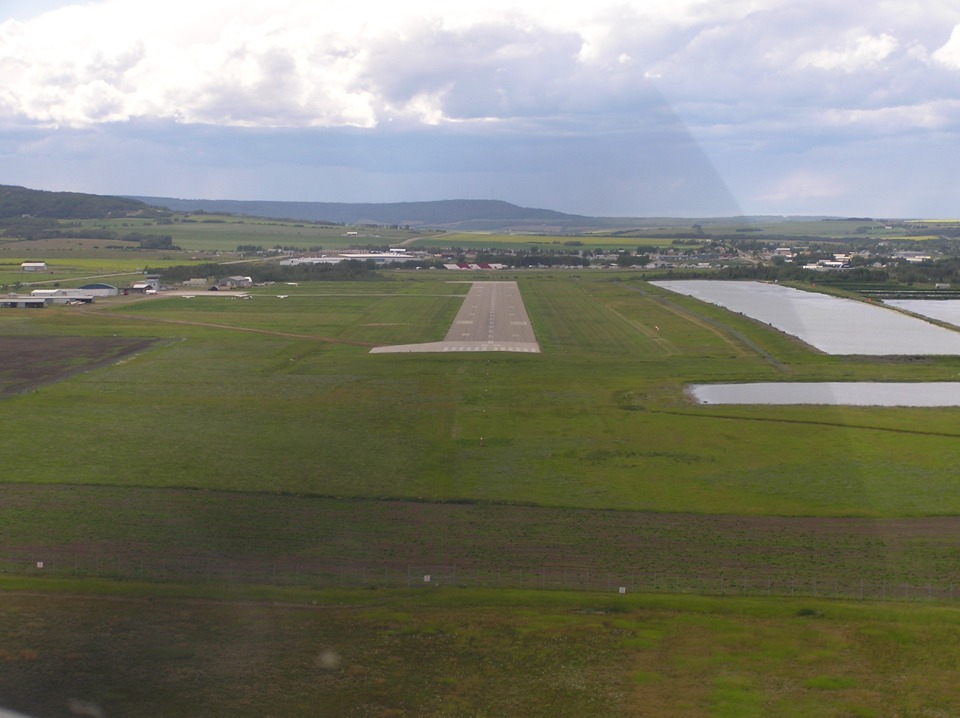 Here is Terry's photo of the FBO at Dawson Creek Airport.  This is a view from the area where the airplane was parked. 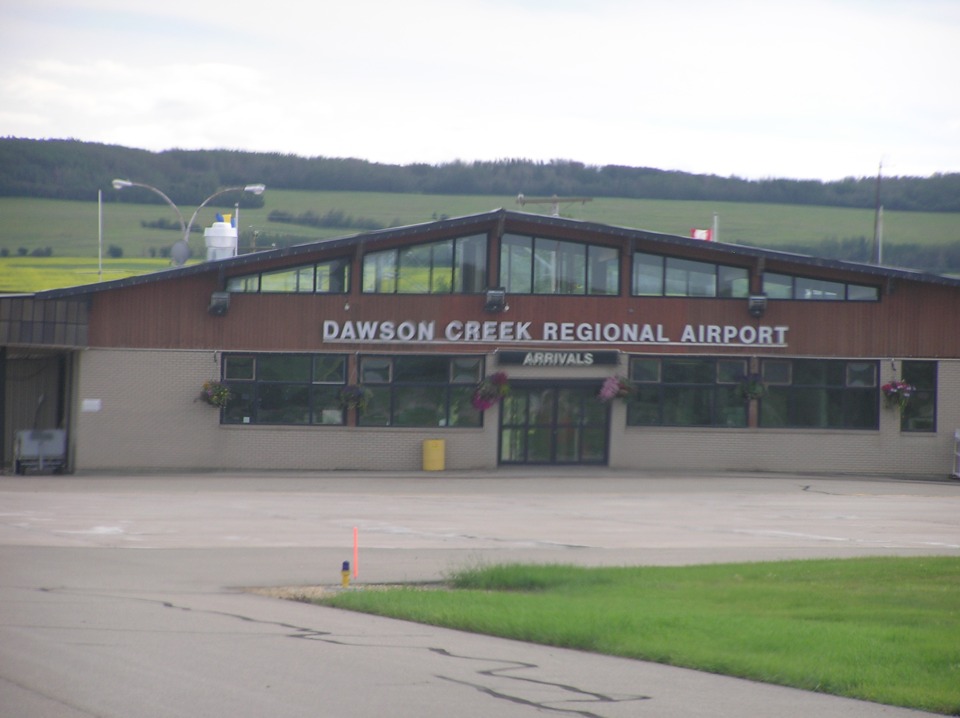 We've had nine pictures for this page, so I will post the aerial views of this airport and some in the town of Dawson Creek on the next page.  It is now 11:40 PM as I post this on Friday night, August 10.  Time to call it a night.  More tomorrow...